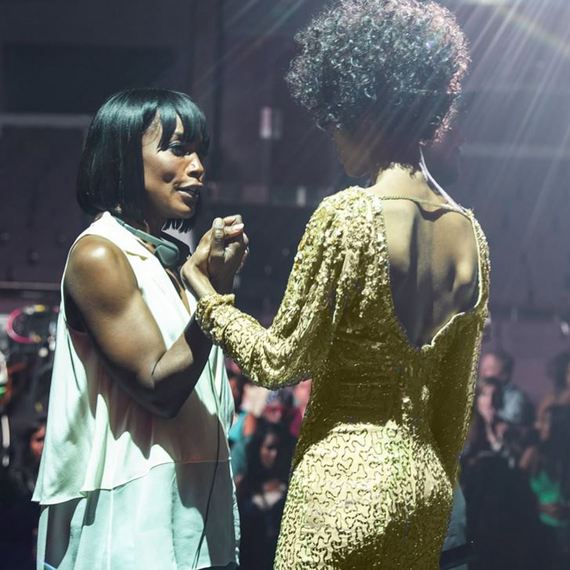 Watched a snippet of Whitney -- the TV movie -- this weekend. The one directed by Angela Bassett.

The fact that I only watched a snippet is the only "review" you need. It was just too Lifetime for me.

Parts did ring true, though. The coke handoff at her birthday party, for one. I have friends who knew Whitney back when she was modeling. And they told me that sweet young petticoated thing singin' about wanting to dance with somebody had some pretty nasty "habits" long before "Bobby B."

Mostly, it reminded me of why I got out of the celebrity fast lane so many years ago, to keep from skidding out of control like Whitney and other famous friends.

Bill Maher always talks about the "bubble" some rabid conservatives live in, where they can make up a fantasy about Obama or anyone else and never be challenged or questioned no matter how bat shit crazy that fantasy may be.

Celebrities are the original "bubble people." Whitney was trapped in one. As if to prove that, one of her best friends looked Piers Morgan in the eye a few weeks after her death and said that because he'd never seen Whitney do drugs:"Whitney didn't do drugs."

I know he needed to cling to that. I bet he still does.

I always tell up and coming feature writers who will be dealing with celebrities, especially musicians, how the bubble is created. I knew lots of bands before they became icons. And every single time, I saw the same pattern.

At first, I was one o' the boys. I could walk into their rooms, backstage wherever I wanted with ease. In fact, they were insulted if I didn't "do the hang."

It's a heady time, when they're full of hope and frustration that it's taking so long. And they need someone with a keen eye and ear to help them tweak things a bit -- and to help carry equipment and wardrobe.

As the first sign of serious "buzz," they hire a real publicist and/or manager to take over from the old friend, wife or other family member. Reporters for major dailies and big name mags still get tickets and passes. Free lancers and writers for "lesser" publications may not.

When the "buzz" becomes serious bidness, the new manager hires a road manager along with newer and bigger bodyguards. And when they have their first real bona fide hit, the road manager and bodyguards will become very, very picky about who gets "access."

This is not necessarily for security's sake. It is done because the new staff fears that old friends who know the band well may be a threat to their status. So the band is usually unaware that this is happening, and may be truly perplexed by the "disappearance" of those early friends.

But the absence of those old friends will be neatly explained by the "bubble builders." And the stars that fall for those stories soon find themselves surrounded by sycophants who see, hear and speak no evil, ever.

Until the star dies or begins to fade. At which time those same sycophants will speak all manner of evil about the celeb to anyone with a mic, camera or notepad.

There is a better way.

I learned it from the best "bubble buster" I've ever met: James "JY" Young of Styx.

We met early in both of our careers, both of us children of Chicago's Southside. And I wasn't a fan at first.

But even at the height of his fame, when the band was making the critics fume by selling out huge stadiums and collecting platinum albums one after the other, JY was -- and still is -- a working class hero to me.

His Midwestern values have never wavered -- he had help with that. Like most of the original band members, he married before Styx "clicked." And the wives very often traveled with them. You don't trash a lot of rooms when the wives are along for the ride. Or Styx didn't, anyway.

They're more like a family business. In fact, back in the day, and I'm sure it's the same now, crew members got benefits and salaries even when Styx wasn't on the road. So they don't have to look around for work to make ends meet between tours.

To make all that happen, Styx will probably tour 'til they just can't crawl onstage anymore. And it really is mostly to keep The Business going, they still get stoked playing the songs those fans have been coming to hear for more than 40 years.

And I like them now -- they're not the "Lady, when I'm with you I'm smiling" Styx anymore. This Styx kicks ass.

But after the "meet and greet" some fans pay big bucks for, there's still just friends and family. And "Uncle" JY loves to find a quiet place to offer my daughter valuable advice about life, love and the pursuit of a career that doesn't feel like a job. 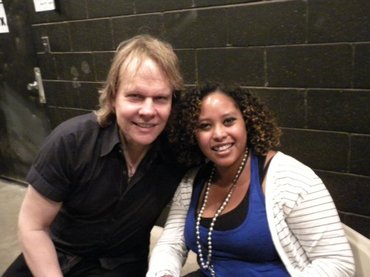 My daughter with "Uncle" JY

Once it was me he tutored, back when I was a 'way too young thing just getting started as a rock critic. Whenever I was in danger of getting into a "compromising" position, I'd think not "What would JY do?" but "What would JY think?"

We lost track of each other when I quit the Chicago Sun Times to move West. And when I drove to New Mexico to see him for the first time in decades, he held up the show, texting to see if I'd gotten my tickets and passes and found my seat -- and where, exactly, my seat was.

More recently, when I became seriously ill, he offered sound advice culled from the medical research he'd done for wife Suzie, who had a catastrophic brain hemorrhage a few years before.

So, I kept wishing, as I watched that little snippet this weekend, that Whitney'd had a JY to talk to. Or to text her every hour on the hour trying to guide her safely "home."