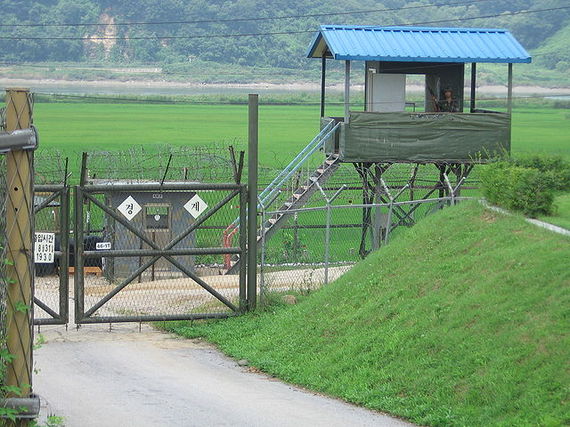 If you were an endangered red-crowned crane or an increasingly rare pygmy owl, where would you rather nest at night?

In the land-mine laden Demilitarized Zone that separates North and South Korea, which former President Bill Clinton once called "the scariest place on earth?" Or in the wide-open spaces surrounding the U.S.-Mexico border, which separates two nominally peaceful neighbors?

The answer, sadly, is that the DMZ is by far the better birding bet. Six decades of armed standoff between the two Koreas have made human incursions into the DMZ exceptionally hazardous, which has turned out to be a boon for wildlife.

No such luck for the formerly unspoiled lands along our southwest border. There, new border walls, surveillance gear, and off-road patrols have fragmented habitat, triggered floods, and marred previously pristine natural areas, with even more human intrusions planned if members of Congress like Sen. John McCain, R-AZ, have their way.

I recently visited the scary DMZ, and would offer this thought on behalf of the feathered set: When one of the world's most hostile boundaries starts to look good in any respect compared to our border with Mexico, we have probably taken our obsession with border security too far.

For those of you rusty on your Cold War architecture, the DMZ consists of a 2.5-mile-wide buffer zone that stretches 155 miles across the Korean peninsula. It surrounds the line where opposing troops, including the U.S., stood in 1953 when a truce was called in the Korean War.

Technically, the war has never ended, and the DMZ is anything but demilitarized. It bristles with cameras, concertina wire, flood lighting and guard towers, along with two million land mines, all designed to keep the North Korean, South Korean and 28,500 U.S. troops still in Korea from going at each other.

It is, as I witnessed during my visit, indeed scary. I had to sign a waiver absolving the U.S. government of any responsibility if I was killed due to "a hostile enemy act."

But what is bad for people turns out to be terrific for nature. In the 60-plus years of its existence, the 400-square-mile DMZ has become a haven for wildlife, including endangered or threatened species like the extremely rare red-crowned crane, mainly because those land mines make human incursions so reliably lethal.

The opposite process has been at work along our southwest border. Like the DMZ, the U.S.-Mexico border region also hosts unique varieties of plant and animal life, such as the increasingly threatened cactus ferruginous pygmy-owl. But unlike the DMZ, post-9/11 legislation in Washington has made the region more, not less, vulnerable to human disruption.

In the name of border security, a series of bills beginning with the 2005 Real ID Act have waived more than 30 environmental laws to allow the construction of border walls and access roads in formerly protected areas. Eighteen-foot-high pedestrian fencing or vehicle barriers now line nearly 700 of the border's 1,969 miles, impeding migrating species, threatening flooding along the Rio Grande, and costing more than $3 million per mile to build.

This infrastructure, portions of which eerily resemble the DMZ, has also steered illegal border crossers into unfenced border segments, many of which traverse harsh desert and mountain terrain. One result is that our southern border is not only less hospitable to the natural world than its Korean cousin, it has also become far more hazardous to the human species.

U.S. Customs and Border Protection (CBP) reports that 4,112 people died trying to cross the U.S.-Mexico border between 2004 and 2014, mostly of thirst and exposure. The last published report of a DMZ border-crossing fatality occurred in 2013 when South Korean guards shot a man swimming north.

Arizona Sen. John McCain is promoting new legislation, which a Senate committee approved last month, that would accelerate the U.S. borderland's human invasion. It would allow U.S. Border Patrol agents, whose numbers along the southern border have doubled to 18,000 in the last 10 years, to conduct motorized patrols and to deploy communications, surveillance, and detection equipment on any protected federal lands within 100 miles of the border in Arizona.

McCain argues this is needed to prevent smugglers and illegal immigrants from evading capture by hiding in the Indian reservations, wildlife refuges or national parks that make up 80 percent of the border in Arizona.

Environmental groups like the Sierra Club counter that hundreds of miles of tracks from off-road official vehicles and surveillance gear already mar formerly pristine areas and lead to erosion and habitat destruction. McCain's bill, they claim, would only accelerate this process.

More importantly, they worry about Congress's continued willingness to gut decades of environmental law in an ill-conceived effort to seal the border with our nominally peaceful neighbor, especially now that new research shows the flow of illegal immigrants has fallen to a decade's-long low.

The DMZ and our border with Mexico differ, of course, in many ways. Most importantly, unlike in Korea, we are no longer at war with Mexico - the Mexican-American War ended with a peace treaty in 1848, and Mexico is now our second largest export market, third largest oil provider, and No. 1 American tourist destination.

And no one is suggesting we let criminals cross the border freely, although the solution for stopping them lies in working more closely with Mexico rather than walling it off.

But as McCain's bill shows, we increasingly treat the border like a war zone, and seem determined to make it a DMZ knockoff, which would indeed be scary.

I'd like to say that our willingness to throw good money after bad and trample decades of environmental law to wall off a friendly neighbor is for the birds - except the birds would clearly not agree.