I have a confession to make. I have gone to one of my sons' dorms and done his laundry. I have scraped every dirty sock and jersey off of his bedroom floor, carefully separating his debris from that of his two roommates, which was all commingled in one large, reeking mass. I then carried these teeming piles, along with every sheet and towel I could lay my hands on, to his basement and ran six loads of laundry.

I did this once on a Parents Weekend, and just when I thought I had lost it and taken my overparenting to a new level, his roommate's mother looked at and me and said, "Too bad the boys don't have a vacuum," and then proceeded to take a lint roller out of her handbag and roll their entire carpet on her hands and knees. I was stunned. Was I out-parented or had I finally discovered the line I would not cross? 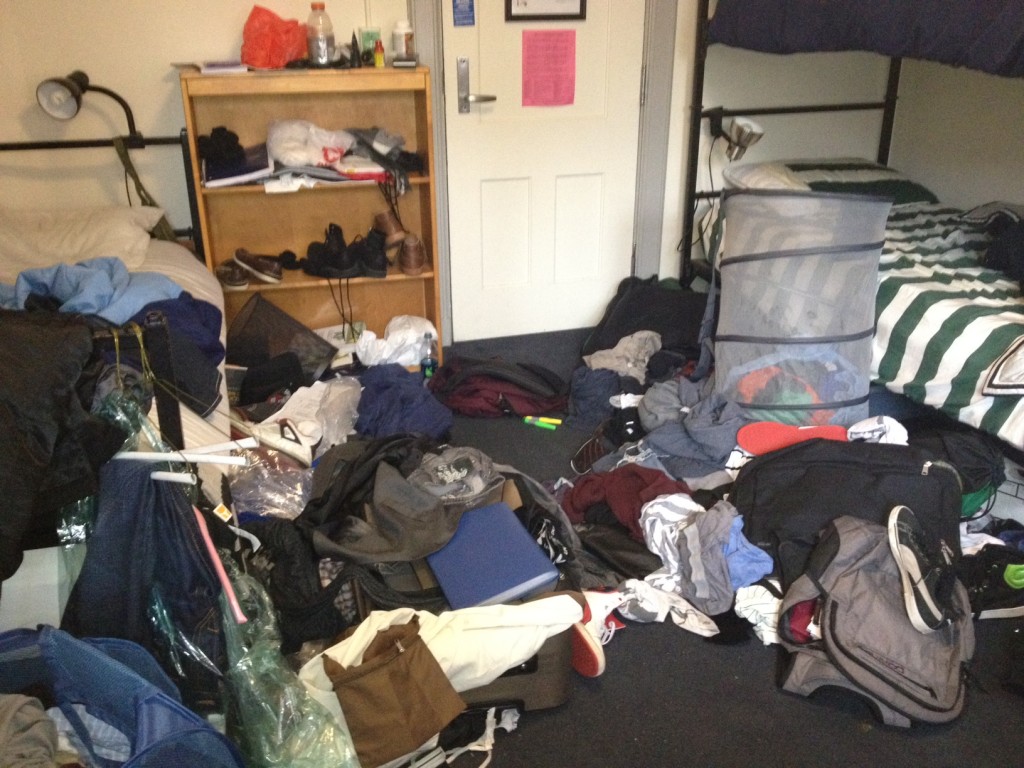 [In my defense, this is not a stock photo.]

I thought I was doing some good, after all, my child had run out of clean socks and underwear and for two decades, I have been the purveyor of everything clean. But when I read the recent headline proclaiming that new research has shown hovering can harm, I wondered if I was doing my son any favors.

According to "Helping or Hovering: A Parent's Dilemma", parental involvement is associated with "positive child outcomes" if that involvement is age appropriate. However, when a parent is excessively controlling in a child's life, particularly when that child is in fact a college age student and in reality a young adult, the outcomes are not so positive and include depression and anxiety. It is scientific proof, we are told, that helicopter parenting is in fact not helping.

The problem arises, according to the authors of the study, when our parenting becomes age- inappropriate. They concluded by finding that college kids who had over-controlling parents were more depressed and less satisfied with their lives than those who had "autonomy supportive parents."

The researchers readily acknowledged that prior studies have shown that college students with highly involved parents actually had increased personal and social development and a greater satisfaction with life. Involvement in our children's lives is not the problem, it is the nature of that involvement, they argue, that has the potential for harm.

This study, I fear, does not give us great insights into when we have gone too far in our parenting. In order to conduct the research, the team investigating looked only at mother-daughter relationships. As those relationships form only one-quarter of the child-parent dyads, I wonder if it is fair to draw too many conclusions.

The study also asked students to comment on some characteristics of their mother's parenting. Helicopter mothers were defined as those who monitored who their college kids spend time with, where their kids were, how much they exercised and ate and would be ready to intervene with a roommate or a professor if there was a problem. Even for those of us well-practiced in over-parenting this seems excessive.

The question that plagues parents of college students is how to define the line between enabling and disabling -- when does our love keep them from growing up? Most parenting is not as extreme as that portrayed in the study, but that doesn't mean that it is not damaging. This week alone, I have doled out medical advice to two sick college sons, proofread employment cover letters, given advice on resumes and acted as a personal financial advisor. Did I go to far?

I knew when to tell my 5-year-old that he needed to tie his own shoes and had no trouble deciding when to let middle schoolers go to the movies without parents or to let high schoolers finally stay out until midnight. But sometimes this is harder. As parents, we harken back to our own college years, but a world in which parent-child contact consisted of one Sunday evening call a week does not provide much guidance. This letting go has fewer clear lines and demarcations.

When the authors looked at over parenting and depression, they were forced to admit that it was very hard to pull apart the causality and interactions. Few college students manage to sail through four years of college without a few rough emotional moments, and most parents know the sound of that heart dropping phone call. I think one of my sons had it right when he said college is a time of high highs and low lows. Suddenly we find that our otherwise cheery college student has realized that she hates her roommate, he has earned the first C- of his life and despairs of Law School and they have been dumped by the love of their young life.

Our heart strings are pulled and we are unable to do more than listen, offer well-meaning platitudes and send chocolate chip cookies. Sometimes, these disappointments can leave our kids hurting for days or weeks or even months. And then we hover a bit. We call more often and ask more questions. As the those who love them most, we stay close until the episode has passed gauging whether our child is managing or perhaps should be encouraged to seek help. We hover because our child is anxious or down, they are not anxious or down because we hover.

The study concluded by calling for more research on the hovering-depression casualty and suggesting that researcher even look to see if parents hover because they themselves are depressed. Such research, I fear, will not be helpful until it looks at more mainstream intensive parenting rather than parents exhibiting the most extreme behavior and also recognizes that the question is not whether to hover versus help, but rather when should we hover and when should we help and when we should stop doing their laundry.

More:
parenting advicedormssonsoverparentingChildren
Newsletter Sign Up
Raise the kind of person you'd like to know
Subscribe to our parenting newsletter.
Successfully Subscribed!
Realness delivered to your inbox