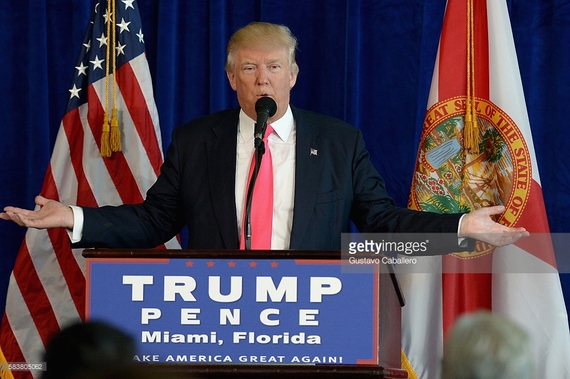 In the wake of the WikiLeaks revelations about the collusion between the Clinton campaign, the Democratic National Committee (DNC) and the press, a diversion was urgently needed -- and promptly delivered. The real story - the DNC's repeatedly tipping the scales for Clinton during crucial primaries -- simply could not become the focus of discussion. Thus was born the meme that Donald Trump somehow put Vladimir Putin up to it. Or that Putin dumped the hacked information to help Trump because, well, because he and the Donald are best buds. So, first came the knowing whispers -- swiftly telegraphed by an pliable press corps and pundit class -- about the likely source of the leak and the motives. Then came the faux outrage.

At his press conference in Florida, with his customary sportiveness, Donald Trump played along, accepting that Russia had perpetrated the hack and dump. Tongue-in-cheek, Trump even speculated that the Russians no doubt had Hillary Clinton's now-deleted emails as well. Perhaps they would share these, too -- so Americans could know what was in them.

This bit of light devilry sent the media turbines into overdrive. How did that happen? Well, the WikiLeaks revelations were clearly dangerous to the Clintons so a "dust up" had to be concocted to conceal and confuse the truth. Deep in some Clinton campaign war room - no doubt in sweat and panic -- A-team staffers and Washington insiders pasted together the bizarre "Trump is soft on Russia" narrative. That was to be the story. Once it was vetted and locked down, it was fed via the usual channels out to the B-teamers on regional editorial boards and at journals and blogs. This, for an audience of true believers convinced that they have more to worry about from Donald Trump's "language" than from ISIS abroad or the recent wave of mass violence at home.

Trump's playfulness was quickly - and disingenuously, I believe -- recast by the ever creative media into an invitation to a foreign power to hack into US emails. This despite the rather obvious fact that Donald said nothing of the sort. The "hacking" - if it happened - occurred long before the press conference. Does the pundit class have no shame? Having just assured us, hand on heart, that Secretary Clinton's deleted emails are staggeringly dull, they now are alarmed that her supposedly "non-incriminating" messages might be released. What's more, all this email voodoo "gotcha" conveniently emerges to conceal the machinations of a presidential candidate who, with her husband, runs a global, back-door pay-to-play scheme that would make a hardened ward boss blush.

There is considerable irony, too, that the current narrative about Donald Trump and Russia is being written by folks who have for years been telling us that a combination of smart diplomacy and soft power is the answer. Soft power - of course - doesn't need or want a strong military. Oddly, the soft power elites have now been joined by a mix of never-Trump conservatives, intellectuals who -- with their particular brand of sophistication - have so far mired us in endless wars.

Eight years ago, the new Obama-Clinton team in Washington was telling us it knew how to work with Russia. How's that working? Now that same group is the establishment, and it is selling a story that Donald Trump isn't belligerent enough. To these "wise guys" Trump is also "unpresidential" (doesn't support us) and an unpredictable and impetuous loose cannon (doesn't support us) in matters of foreign policy.

They overlook the plain fact that Donald Trump is cautious about applying military power - as any sane person should be. He is also wary, like George Washington, of entangling alliances, while recognizing the need to maintain military strength as a deterrent. These are not new policies. They are a well-tested formula. And what, for their part, have our erudite foreign policy elites produced? Look out the window -- endless wars, open borders, and incoherence in response to an imminent threat -- Islamic jihad.

Donald Trump may come off to the political class as sometimes brash -- an unruly "outsider." But in the present instance, I believe, Trump is actually having fun discomforting the crowd who deep-down know that more WikiLeaks could derail Hillary Clinton and her campaign.