The Zuckerbergs, normal family folk like you or me, did what many did on Christmas Day: Posted an awkward family photo onto Facebook. Except when Randi Zuckerberg does it -- and when that photo gets inadvertently shared with the entire Internet -- it becomes a lesson in Facebook's byzantine privacy settings.

Here's what happened, as first pointed out by Buzzfeed: Randi, sister of Facebook CEO Mark Zuckerberg, posted a photo of the clan checking out Facebook's new app, Poke, which lets users share photos that get automatically deleted shortly after being opened. Callie Schweitzer, a marketing director at Vox Media, saw the picture in her Facebook feed and, thinking it was a public photo, reshared it on Twitter. 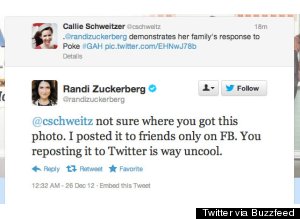 Turns out, the pic wasn't public. Randi had posted it on her private Facebook account and the only reason it was visible to Schweitzer was because she's Facebook friends with Randi's sister. Randi chastised Schweitzer on Twitter, noting that one's photos show up by default in a non-friend's News Feeds when a third mutual friend is tagged in the photo. To her credit, Schweitzer then deleted the tweet.

Was that explanation confusing? We think so, too. The irony that publications -- including Buzzfeed, Gizmodo, Mashable, PC Mag and others -- are latching onto is that even someone related to Facebook's co-founder still couldn't manage to keep her "private" photos private.

Now that Zuck family pic exists on all those aforementioned websites forever. The lesson: Don't expect anything you share on Facebook to stay within the social network's walled garden.

The dangers behind private photos being reshared publicly is something Facebook implicitly acknowledges, too. After all, that's the reason it developed that Poke app.