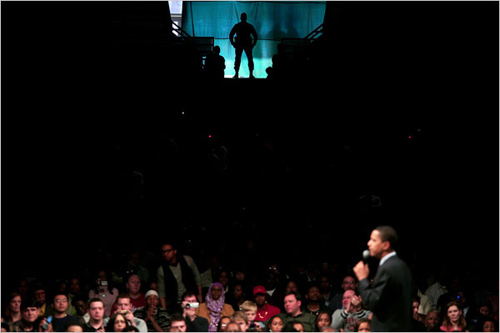 I don't see the point of tip-toeing around it. Is Obama getting adequate security, or not?

In the NYT story published on-line yesterday ("In Memories of a Painful Past, Hushed Worry About Obama"), we're told of supporters who won't vote for the candidate out of concern for his well-being. We're told how Obama likes the guys in his security detail, plays basketball with them and has made peace with the risks of running for president. We're even told how Obama's motorcade passed Dealey Plaza and the Texas Book Depository building last week, and the candidate didn't even notice.

So, what I'm wondering (but, probably won't receive an answer for "security reasons") is: was the decision to terminate screening procedures last week at Reunion Arena in Dallas an hour after the gates opened, but over an hour before Obama was to appear, a security lapse or not?

If the article in the Times completely ignores the situation in Dallas (although, I'm assuming, was inspired by it), the accompanying 13 shot slide show -- focusing on Obama's security detail -- might as well be a commercial for the Secret Service.

In considering just one of the images, we see the dramatic silhouette of a law enforcement figure seeming to hover -- like Big Brother -- over Obama's rally last month at the Bartow Arena at the University of Alabama. Courtesy of an illuminating open thread at AmericaBlog, however, we get a somewhat different slant on that event -- and the photo.

Inviting feedback from people who have attended Obama rallies around the country, an AmericaBlog reader who attended this particular rally suggests the same kind of lapse that occurred in Dallas. The commenter writes:

Early this month my family went to see [Obama] speak in Birmingham, AL. The line to get in was 3-4 people wide and circled an entire city block. It was moving very slowly at 1st, with people stationed every 100ft or so telling you "no bags were allowed of any type, have all camera's and anything else metallic in your hands before going through security". As we got closer to the 2:00 start time the pace picked up. When we got up to the doors of Bartow Arena there was no security evident. We walked through the turned off metal detectors and it seemed at least 50% of all women had bags. We thought it was strange at the time and other people were talking about it before Obama came out and started speaking. I have quite a few pictures of the event and it's obvious that it was possible to get very close to the Senator.

In considering the issue of protecting our presidential candidates, especially one as popular and groundbreaking as Obama, I was also drawn to the discussion thread of Roanoke Times blogger Shanna Flowers. In reaction to her concern about the Dallas situation, her readers question why the protection of a presidential candidate wouldn't automatically rank as a first-order priority of national security.

...I was also wondering if you have attended an Obama rally, and have experiences to share?

More readers weigh in about Obama's security (AmericaBlog)
Questionable security practices at Obama event in Dallas (Carpetbagger Report)
image from: NYT Slide Show: Security Details
Barack Obama visits Birmingham's Bartow Arena - Check out this photo gallery, including the pix from the bottom row (The Terminal)
In Memories of a Painful Past, Hushed Worry About Obama (NYT)
What the heck is the Secret Service thinking? (Shanna Flowers/Roanoke Times)