Epic rhetoric echoed around the Le Bourget conference centre at the opening of the Paris climate summit. World leaders, who had gathered in the capital on Monday, know this is a historic moment.

Barack Obama's few minutes at the podium were as good as anyone's: "For all the challenges we face, the growing threat of climate change could define the contours of this century more dramatically than any other. What should give us hope is that this is a turning point. This is the moment we finally decided we would save the planet."

They're going to save the planet no less.

So, is COP21 -- the 21st session of the Conference of the Parties to the United Nations Framework Convention on Climate Change (UNFCCC) -- just more UN hot air, albeit it with Biblical levels of rhetoric, or is this a different beast altogether? The simple answer is that COP21 deserves all the rhetoric you can throw at it.

Some years are more interesting than others and COP21 is the remarkable end to a remarkable 2015. Let's put it in context. In 2015, carbon dioxide levels in the atmosphere reached 400 parts per million. This is 40 percent higher than levels during the last 10,000 years -- the period geologists call the Holocene. Homo sapiens have never encountered carbon dioxide levels this high. We have pushed Earth's biosphere -- the zone on Earth where life exists -- beyond a natural boundary, for the Holocene at least.

In 2015, global temperatures reached 1°C (1.8°F) above temperatures just before the industrial revolution kicked off. Again, we are pushing against the Holocene envelope where global average temperatures deviated no more than about plus or minus 1°C. And finally, 2015 will be the warmest year on record. We can confidentially say this even before the year draws to a close. Also this year, researchers reported that if we burn the remaining known fossil fuel reserves we will lose the Antarctic ice sheet and sea-levels would rise 58 metres.

Of course it is not just climate that is a concern. We are losing biodiversity at approaching mass extinction rates -- there have been five mass extinctions in Earth's history, we are causing the sixth. The oceans are becoming more acidic at rates not seen for 55 million years. And we are changing not just the global carbon cycle, but the nitrogen, phosphorus and water cycles too. The simple conclusion is that we are no longer in the Holocene. We are now in the Anthropocene -- the age of humanity.

In January, the year began with two research papers published on the same day and led by the Australian academic Will Steffen. The first -- The Trajectory of the Anthropocene: the Great Acceleration - confirmed that since around 1950, human impact has become the dominant driver of change in Earth's biosphere - in a single human lifetime. 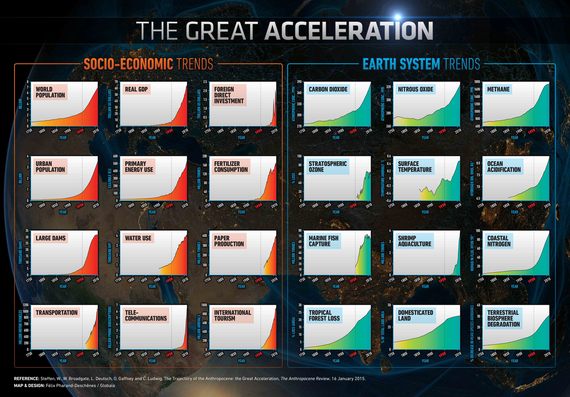 The second paper confirmed the existence of 9 planetary boundaries it would be unwise to transgress or risk exiting the stability of the Holocene - the only conditions known to support a global civilisation. The authors reported we have likely crossed four boundaries relating to climate, biodiversity, deforestation and our use of fertilizers.

What is happening on Earth right now is unprecedented. As Steffen has remarked before, "We are in a no analogue state".

In ecology, some species evolve and thrive by altering their local ecosystem to such an extent that all other living organisms in that ecosystem must adapt or die. These are the 'rebel species'. Cyanobacteria fall into the rebel category. Three and a half billion years ago they were the first to evolve mechanisms to draw energy from the sun - photosynthesis. But they produced a highly toxic waste product - oxygen. As cyanobacteria proliferated 2.3 billion years ago oxygen levels rose during the Great Oxygenation Event, and all other life moved deeper into the cracks and fissures. Some still exist there - the extremophiles.

We are a rebel species - or maybe the one billion living in the developed world (notably, Obama recognized the US's role in creating the problem). We found a new energy source - fossil fuels - and now we have radically altered the planet. We use an area the size of South America for our crops and an area the size of Africa for our livestock. And we alter Earth's biogeochemical cycles to suit our needs.

Recognition of this new worldview and responsibility for the long-term stability of Earth's biosphere came in September with the launch of the Sustainable Development Goals. Unlike previous goals, the 17 goals are universal, applying to all nations. The details of the climate goal were left blank until the outcome of the Paris summit. And recognition has also come from the research community with the launch of Future Earth, an international platform to catalyze solutions focused research for global sustainability.

So here we are. Taking this longer perspective, we can say that 2015 is somewhat unique in Earth's 4.5 billion year history. Until this year, we were rebels without a cause. With the new global goals we have a cause. With the Anthropocene we have a new worldview. With the planetary boundaries framework we have a new set of rules to operate within. And with a climate agreement in place we could create the conditions to solve the single most urgent challenge - emissions of greenhouse gases must peak more or less immediately and fall to zero more or less by around 2050.

Of course, the planet does not need saving. It will be here for a long time to come. But we - this entangled, hyperconnected global society - do. Our friends the cyanobacteria pushed out all life that did not conform to the new rules. But in their place new life arose. While rebel species radically altered its ecosystem - on a grand scale - the oxygen eventually allowed an explosion in biodiversity. Cyanobacteria created the conditions for multifarious life to thrive on Earth.

Rebel species can be a force for good. Can we? Imagine a planet where businesses enhance biodiversity rather than destroy it. A planet where corporations store carbon rather than emit it - as Unilever now plans to do. A planet where we plan for our future and everyone participates in collective decision-making for the common good. A planet where the dominant species has regeneration as its dominant worldview. No sane person would choose the alternative. We simply must safeguard Earth's resilience.