The road heading towards Qaimjatoi, in Dadu district in Pakistan's southern Sindh looked like it was literally disappearing into the river. A week ago, it was impassable; now, it was still surrounded by flooded rice fields, but most of the road had, at last, re-emerged from the waters. 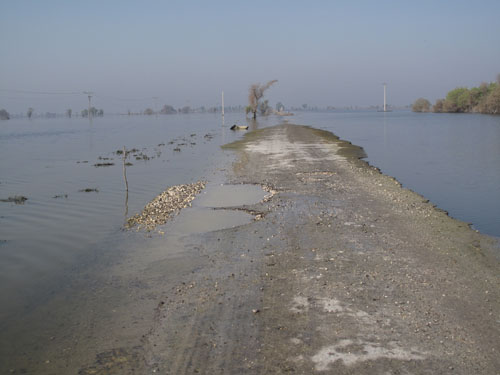 All around us, rice fields and trees were submerged in water. We were going to meet 18-year-old Sakina Ghaincha, living with hundreds of other displaced families on a narrow ridge of an elevated embankment. The families are living here in makeshift wooden shelters, with straw mats hung over the top as a roof. Locally-made colourful hand-stitched patchwork cotton quilts, called rili, were strung along the sides of some shacks, affording families a little privacy and also some warmth when night-time temperatures drop. 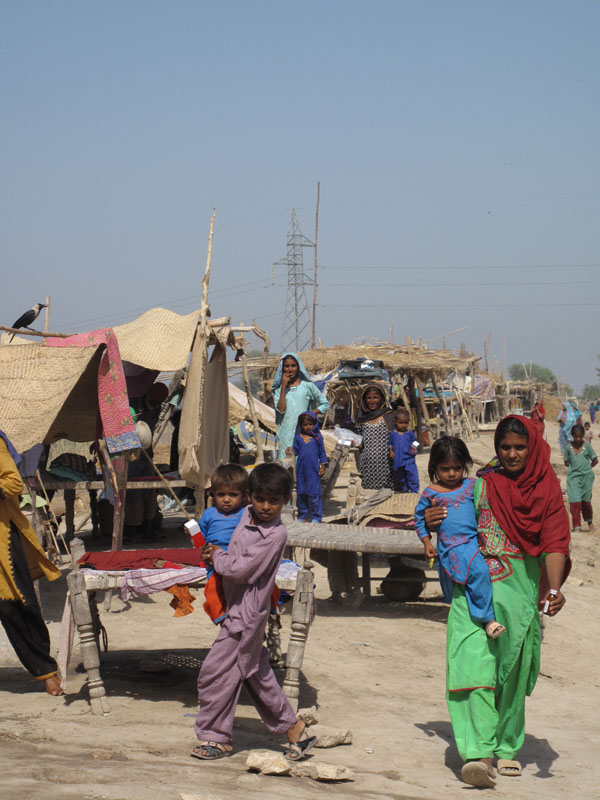 Families living on the embankment

Many people could see their flooded and damaged villages from the elevated bank, but couldn't get back to them yet because the flood waters were still several feet high. For most, boat travel remained the only way in and out. Sakina comes from Qaimjatoi, just a kilometer from where she's sheltering. Heavily pregnant, she struggled through knee-high waters when the floods came in August. Two days later, she gave birth to a baby boy, Ghous Bux, in the open air. 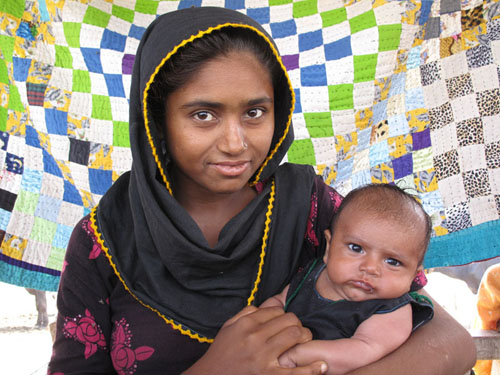 "He's our ray of hope in these difficult times", she told me, shyly. "I was so happy after my son's birth. It's a miracle for us". Her son was her first child. There were no health facilities; but Sakina was lucky to find a traditional birth attendant who had also fled a flood-hit village and was sheltering on the same embankment. Sakina also said she was very pleased to receive hygiene help and advice from Oxfam and its partner, SAFWCO, (the Sindh Agricultural and Forestry Workers Co-ordinating Organisation), who have been working with the community to keep the area clean, distribute hygiene kits, provide water and build toilets.

"They were the first organisations to work here. We've sat down with the health workers to hear about the importance of handwashing -- how it can prevent disease -- and good hygiene. "Now I can properly take care of my son and give him a wash with soap. We have buckets to store water and I can take a bath. We had nothing before."

Sakina smiles as her son wakes and wants feeding. She's determined to provide him everything she never had -- including an education, a chance to get qualifications and a good job. Despite her joy at being a mother, Sakina worries about the future. Her family house was completely destroyed in the floods. Her husband, a tenant farmer, will be unlikely to be able to begin farming his land for at least six months as it is still under water. They lost all their rice crops just before harvest-time. 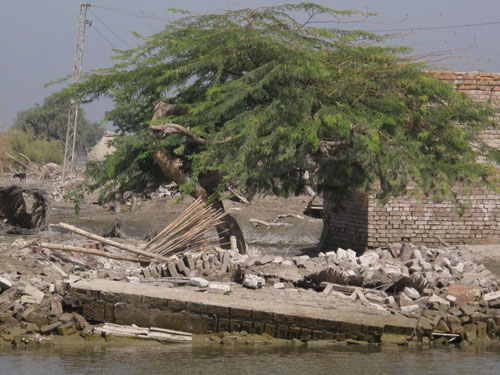 Qaimjatoi village She also feels anxious at the lack of privacy she has when she breast-feeds her new-born son in her road-side shack. Trucks, motorbikes, cars and animal-drawn carts all drive past as we talk. "We have no idea what the future will bring. We just live here day to day. If we go back home, there's nothing for us; and nowhere to live. We're worried about finding work to earn money to feed our family". The daily difficulties and the approaching winter months are a worry not just for Sakina but for tens of thousands of other families in Sindh -- the region that was the worst-affected by the floods, and where more than a million still remain displaced because stagnant flood waters still remain stubbornly high. Many are staying in large tented cities; others in makeshift shelters, like the one Sakina is staying in, on higher ground, waiting to be able to return home when the waters recede. They've lost their homes and livelihoods. It's been a struggle to survive; and now they're not sure how they're going to be able to feed their families over the next few months. It will be several months before many can even begin preparing their land for planting; and a year of more before they will be able to earn money from their harvests. Families are getting themselves further into debt and are becoming increasingly desperate. "My only hope right now is my son", Sakina told me. "He is our hope. Because of my son I have hope."