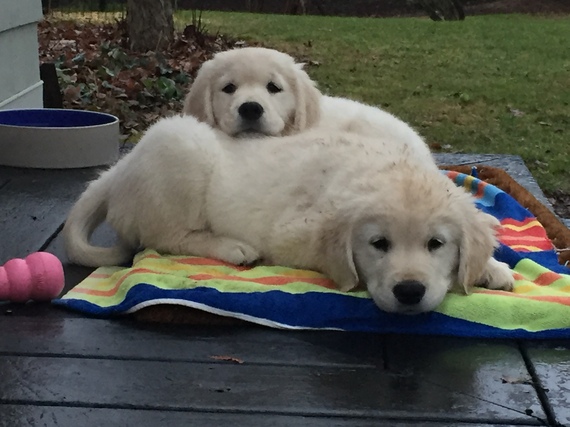 Last week, Quebec welcomed pets into the circle of "sentient" beings by granting them many of the same rights as children in the eyes of the law. The legislation, hailed as the "Animals are Not Things Manifesto" lifts the legal status of specific animals from mere property, i.e. inanimate objects like toaster ovens and iPhones that can be manipulated any which way, to sensitive, emotional beings that require nurturing and respect.

Quebec's new regulations also address the psychological care of dogs, cats, horses and certain wild animals, requiring that each animal be given necessary stimulation, socialization and environmental enrichments. Any actions or activities that expose an animal to extreme anxiety or suffering are subject to legal consequences.

This shift in how we think of our pets -- from animals as property to animals as sensitive beings -- isn't just happening in Quebec. New Zealand and France changed their laws this year, too.

Perhaps it's time for America to lead our planet in something other than gun violence, low test scores and obesity. Eye rolls aside, what do you think? Could America rally to treat pets like family -- like children -- with a legal right to human sensitivity and love?

In my upcoming book, Modern Dog Parenting: Raising Your Puppy or Dog as a Loving Family Member (Fall 2016, St. Martin's Press, New York, New York), I reflect on the story of Mary Ellen who was whipped, beaten and only allowed outside at night.

What makes Mary Ellen's story so remarkable is that she wasn't an animal, she was a 9-year-old child. In 1873, two years after the ASPCA (the American Society for the Prevention of Cruelty to Animals) was founded, both pets and children were considered property, with no more protection under the law than a lamp.

At the time, Mary Ellen's neighbors reached out to the police, but they were turned away. In a last ditch hope, they notified Henry Bergh, the ASPCA's first president, and although he too was told he didn't have any legal jurisdiction, he didn't back down. In a trial, the ASPCA claimed that if Mary Ellen were a dog, horse, or cat, their association would have every right to protect her.

After the trial, Mary Ellen was placed in foster care and went on to lead a reportedly happy life. Two years later, her case moved our nation to change its laws, granting children the same rights as other citizens, protected until their 18th birthday.

However, dogs and other animals still protected under the ASPCA continue to be considered property, some 142 years later. Few but the most monstrous acts against them are ever brought to trial.

At Duke University, Brian Hare studies how dogs think and learn using online surveys and laboratory experiments with pet dogs. On his Dognition website, you can register your dog's results in tests that are similar to experiments used on infants and young toddlers. Hare's work, inspired by the early interests of many great scientific minds -- including Charles Darwin, Konrad Lorenz and author, professor and theorist Staley Coren, Ph.D. -- continues to explore, expose and expand the way we are regard dogs today.

Newer on the canine biomedical scene are Dr. Elinor Karlsson, an assistant professor in the bioinformatics and integrative biology program at the University of Massachusetts Medical School, and her associate Jesse McClure. Their free online outreach program, Darwin's Dogs, in collaborating with the International Association of Animal Behavior Consultants (IAABC), focuses on collecting DNA samples and recording the health and behavior of pet dogs. Dr. Karlsson reflects that dogs are best model for studying the effects of modern life on humans -- from its pollutants and stresses -- as dogs are living it with us. Their hope is that discovering genetic similarities in both physical and mental diseases will lead to innovations in treatments as well as cures for both dogs and people. Parallels have already been drawn in other studies of osteosarcoma (bone cancer), epilepsy (a neurological disorder) and narcolepsy (a sleeping disorder).

If our feelings, emotions and physical health are this closely woven into the fabric of our life with dogs, who then can justify treating them as property? There isn't one inanimate object that responds to our devotion like a dog will, nor anyone, save a young child, who will unconditionally affirm our hopes that just by showing up, we truly count.

Now is the time for America to rewrite its own legislation regarding animal welfare. Collectively we can lift our dogs into the realm of beloved family members where they ultimately belong.