Bo Slyapich caught his first rattlesnake at the ripe old age of 5. It was a kill-or-be-killed situation, so he killed. From that point forward, though, he learned to love "all of God's creatures," he says, and these days his wrangling methods are more refined: He captures the serpents and relocates them to safer areas. In his home in Calabasas, California, he keeps a number of non-venomous snakes that are both pets and educational partners for the many lectures he gives at firehouses, police departments and schools. 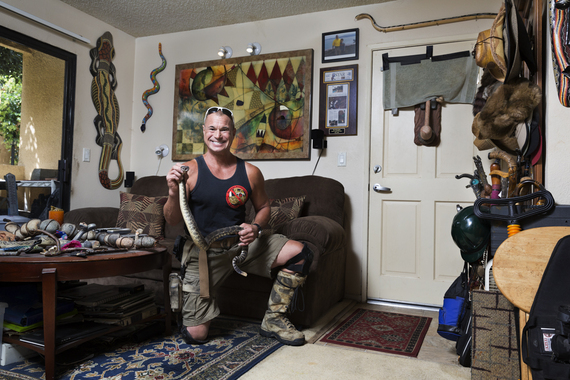 He has worked in entertainment as a "snake stuntman" of sorts, as an animal handler more generally -- and now he's branching into home security. In Southern California, you see, every new house is a potential rattlesnake dwelling, and ensuring it doesn't become one is beneficial for human and reptile alike.
Slyapich's growing reputation has made him the snake expert of choice for local news media; his client list includes L.A. luminaries such as Arnold Schwarzenegger, Dwayne Johnson, Sharon Stone, Ellen DeGeneres, Jamie Foxx . . . and even an elderly woman down the street who paid him with a sandwich.
Miraculously, in more than five decades of snake wrangling, he has never been bitten. (He credits "not being stupid.") He's vigilant about his hands and feet, protecting the latter with armor-plated boots. Respect for his adversary -- a sensible amount of fear and certainly no disdain -- is crucial as well.
His avowal of love for all God's creatures has one exception, however: "I hate spiders; they bite the shit out of me," he says. "They like my taste."