Former state representative Robin Kelly, a strong supporter of gun control, won the primary race by a wide margin over former Rep. Deborah Halvorson in a race that became a focal point in the ongoing gun debate since the massacre in Newtown, Conn. Bloomberg's super PAC, Independence USA PAC, spent big to defeat Halvorson, who received an "A" rating from the National Rifle Association during her one term in Congress.

Independence USA PAC spent more than $2.2 million in the race, likely more than all the candidates spent combined. This is an exorbitant amount for a primary election for a House seat, even for super PACs, which can raise unlimited sums from individuals, corporations or unions. There were only nine House races during the 2012 election where a single non-party independent group -- super PACs and nonprofits -- spent more than Bloomberg's super PAC spent in this low-turnout special primary election. 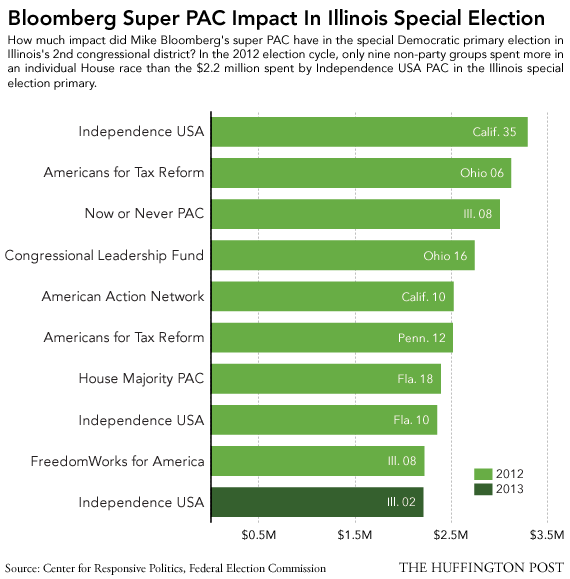 Between Tuesday's win in the Illinois special election and the ousting of the pro-gun Baca in 2012, Bloomberg's super PAC must be acknowledged as a major political player in Democratic primaries. The group could play a role in aiding any Republican who chooses to vote for the package of universal background checks and bans on high-capacity magazines and assault weapons favored by the New York City mayor.

Prior to the 2012 election, the gun-control lobby had ceased much of their direct political engagement in elections, reporting less than $90,000 in electoral expenditures since 2004. The National Rifle Association spent more than $68 million on elections over the same period of time.

Since launching just weeks prior to the 2012 election, Bloomberg's super PAC has spent $10.4 million to help elect or defeat federal candidates.