Russia, as expected, vetoed a draft UN resolution on the Crimea but China abstained. And that was one purpose of putting the document to a vote in the first place.

The West's objective in the UN Security Council was to show Moscow it was isolated in conducting a referendum in the Crimea asking Russia to annex the region. But none of this affected President Vladimir Putin, who sent forces to seize a natural gas terminal in the Ukraine beyond the Crimean border.

The incursion was first announced in the middle of the meeting in the 15-member Council on the U.S.-drafted resolution. Ukrainian Ambassador Yuri Sergeyev told members that Russian troops and helicopters entered the mainland Kherson region from Crimea.

In response, US Ambassador Samantha Power told reporters after the Saturday session: "Obviously, if Russia compounded what it has done within Crimea by crossing into southern Ukraine that would be an outrageous escalation."

Water, gas, power Ukraine supplies Crimea with water, gas and electricity and could turn it off. But then Russia could stop fuel supplies to Ukraine in any tit for tat.

Why? The explanation Russia gives is to save Ukraine from fascists that are taking over the country from a freedom-loving Russian minority as during World War II. Or was Russia fearful of Ukraine's dance with the European Union?

Are there extreme rightists in the Ukraine? Yes but that is not the whole story of why Ukrainians of all stripes protested against the former pro-Russian corrupt government and its flirtation, then rejection, of ties to the EU. Were Ukrainians Nazis in World War II? Some were but many joined the Red Army, particularly after the Germans treated them as Slavic "untermenschen."

It seems more plausible that President Putin wants to intervene whenever he feels Russian-language speakers are at a disadvantage and borders are murky. "It's not the full reconstitution of the old Soviet Union, but it represents more than acceptance of a small Russia," said Richard Haas, president of the Council on Foreign Relations.

But France and others rejected that argument, saying there were minorities all over the world. "Russia has vetoed the U.N. Charter," Ambassador Gerard Araud said. "We are going back to 1914, and we are in 2014. You cannot simply use force to solve your problems."

A Western diplomat said earlier that Crimea was not a strategic region. Moscow already had Ukraine's permission for 8,000 troops to guard its Black Sea fleet. As for the EU, the envoy said it had no strategy at all in toying with Ukraine without thinking what would follow.

China vs Russia China, which usually votes with Russia (and vice-versa), abstained as it did during Russia's carve-up of Georgia in 2008.

Its UN ambassador, Liu Jieyi, told the Council that Beijing respected the "territorial integrity of all states." He warned, presumably the West, that "foreign interference" was also a reason" for violent clashes in the Ukraine. But he proposed an international mechanism to resolve the crisis, similar to a "contact group" the West wanted and Russia ignored.

The defeated draft resolution would have reaffirmed Ukraine's "sovereignty, independence, unity and territorial integrity" and declare that Sunday's referendum in the Crimea "can have no validity." It did not mention Russia by name. (see text)

The vote was 13 to 1 with one abstention.

"The resounding message from today's vote is that Russia stands isolated in this Council, and in the international community," said British Ambassador Mark Lyall Grant.

Baltics nervous The Baltic nations, former Soviet republics, are nervous. Lithuania's ambassador, Raimonda Murmokaitė, said her country was "profoundly troubled" and had "tremendous concern" about "what is to come next" after observing Russian actions in Georgia and Moldova.

In a hard-hitting speech, Ambassador Power told the Council that "Under the UN Charter, the Russian Federation has the power to veto a Security Council resolution, but it does not have the power to veto the truth."

She said Russia had no respect for international principles, enshrined in the UN Charter on the use of force and respect for the sovereignty, independence, unity, and territorial integrity of UN member states. "These are principles that Russia agrees with and defends vigorously all around the world -- except, it seems, in circumstances that involve Russia."

Crimea was part of Russia proper until 1954 when Nikita Khrushchev ceded the region to the Ukraine, his original base of operations. This was seen as a "goodwill gesture" following Stalin's purges there, especially against the Tartars. But then Ukraine was part of the Soviet Union. Its borders had been enlarged during the Hitler-Stalin pact of 1939 when Poland was divided and parts were given to the Ukraine, now the most pro-Western part of the country.

Everyone is preparing sanctions: the United States and the European Union. And the Security Council will keep on meeting on the issue, which has drawn attention from other hot spots in the world.

Oil prices may rise and violence may escalate. But until there is a major economic impact, it is doubtful the Kremlin will compromise. 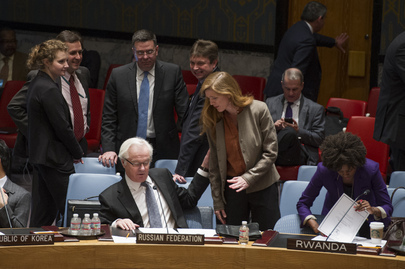