I'm trapped in a box, living two distinct futures. In one I live on Mars, with the inherent complexities, perils and lack of creature comforts that the first colonists will encounter there. In the other I'm spending the remainder of my days here on Earth, sipping tea in a comfy chair that swivels, rocks and reclines, with two out of three cats within easy reach most of the time. 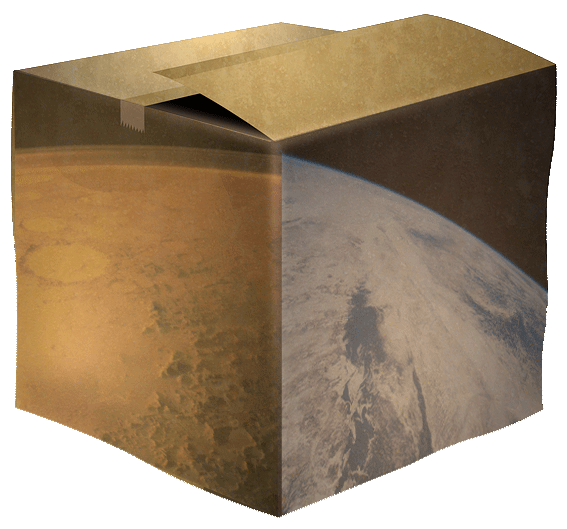 Consider the view out my window. Is the sky blue or salmon-hued? It's both. Do I see my own familiar neighborhood or one tight cluster of interconnected living and working pods? Verdant greenery or austere desert? I see both, of course.

I greeted the previous new year freshly invigorated by the email I'd received Dec. 30, 2013: Mars One had selected me as a potential astronaut candidate, one of 1,058 worldwide who might make the first trip to Mars 10 years hence. One new year later, I'm one of 660 still in the running, preparing to be grilled in my online video "job" interview.

The nondisclosure agreement I've signed prohibits my sharing any more information about this part of the selection process, but the promised February Mars One announcement will signal the day my box springs open, allowing one reality to emerge: I will continue preparations to enter astronaut training, or I'll hang up my astronaut dreams and proceed with life on Earth. Either way, my existence has been forever changed by this year of Martian thinking.

What does a year of considering one's future as a colonizing Martian do to one's consciousness?

I have learned that enormous change is still possible -- and that I'd welcome it. Even though I'm happily settled in my life, easing into retirement with a pension I considerate adequate and a daily schedule I can manage, I've discovered an itch to explore new mental and physical territories, assume new identities and forge new relationships. It's an adventurous and touristy side of me I'd never fully acknowledged, until now.

I've learned that my life on Earth -- like everyone's -- is severely limited in scope, and that one's habits, associations, perceived needs and desires are no more than reflections of this limited range. My favorite earrings, houseplants and menu items would fade into fond memories if I left, soon replaced by items and activities I can barely fathom at present. The notion of so easily devaluing and dismissing the precious life experiences I've accumulated here is a surprising and somewhat disconcerting realization.

I'm shocked to even consider that I could leave everything behind -- everything -- and that doing so would not be as difficult as I'd once assumed, because all that I've seen and done here is still a part of my consciousness and always will be. It's just that my mental and physical existence would be expanded and augmented by all the new things I'd encounter.

This year has given me a chance to visit Mars already, to invent a new reality of myself as someone living there. Box open or box closed, my life on Mars will forever coexist with my life on Earth.

Eventually I'll assemble a Schrodinger's memory box stuffed with treasures from life on both planets. I'm on Earth, sifting through these memories. I'm on Mars, collecting new experiences.

I wiggle into my favorite jeans and step out onto my deck in shirtsleeves to take a deep, clean breath. It's a balmy winter day in San Francisco, so classically clear I can see the Farallones.

Encased in my Mars suit, I step lightly but carefully out my pod door into an alien landscape punctuated with swirling dust devils and realize that with each sol passing, this place seems more like home.