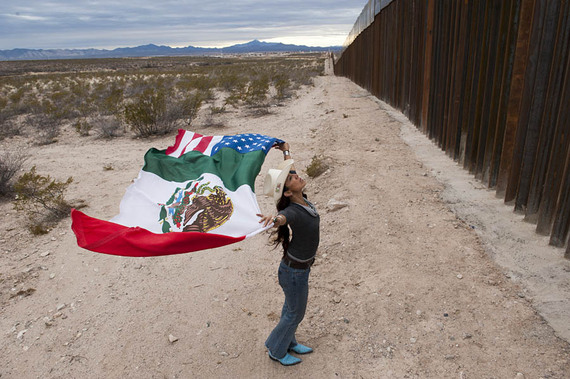 While there are many gaping holes in our immigration system, none gets as much attention as our southern border with Mexico. It is no wonder that the current crop of presidential candidates focus so much of their time on the topic.

In my first essay, I made the bold statement: "Mexico isn't going to pay for the wall, and we're not going to deport millions of people and break up families. If you think either one is a good idea, you're not smart and probably not a person I want to hang out with."

The vast majority of readers who commented agreed with that sentiment. Not surprisingly, a significant number of people told me in a variety of colorful ways that we will indeed build a wall, Mexico will pay for it, and we will round up and deport every illegal immigrant (including their unwanted anchor babies) and send them back from whence they came. (These are the folks that I won't be inviting over for a cookout anytime soon.) But let's be clear about both of these notions -- the wall and mass deportation. Even if we built a big, strong, beautiful wall from San Diego to Boca Chica, thousands upon thousands of illegal immigrants would still find their way into the United States. They will dig under, climb over, and drive through this fantastical wall (packaged in myriad creative ways). We would also see images of dead men, women, and children crammed into trucks, boats, and suffocated in collapsed tunnels paraded across our screens and newspapers (or maybe not). The death toll will be staggering and will be yet another stain on our national conscience.

It's curious to me that none of the politicians who spit buckets of venom on this topic ever ask the one simple question that might point us to a humane and cost-effective solution. They never ask, why do so many people risk their lives to cross our southern border?

Even a cursory glance at the news coming out of Mexico reveals the glaringly obvious reason -- Mexico is a horrifically dangerous place. Mexico is in the midst of what amounts to a civil war. Only it's not a war between two opposing political factions, but instead it's a war waged by drug cartels against the legitimate Mexican state and federal governments. The situation is made worse by the fact that Mexico is still undergoing a slow recovery from the Global Recession of 2009, has one of the highest poverty rates in the Western Hemisphere, and has a significant portion of its labor force working in the black market. The drug-related violence is so bad that it has actually resulted in a drop in the average life expectancy of the Mexican male population.

While the government grapples with a bruised and battered economy, they are also struggling to maintain law and order in virtually every state in the country. Murders and assassinations of police, judges, and politicians are on the rise. Some communities are literally under the administrative control of drug cartels, the citizens either forced into service for or living in fear of the drug dealers. This is the reality for millions of people who just want to raise their children in peace.

Before we get too far into this topic, let's agree on something: the United States has a problem with illegal immigration. Here are five quick facts from the Pew Research Center that anyone should be able to stipulate to when discussing the topic of illegal immigration:

Some people will argue that anyone wanting to flee Mexico should simply come to the US via one of the established and legal immigration pathways. That sounds great on paper but the reality of legally immigrating to the United States is difficult for everyone and impossible for many. The American Immigration Council states, "Many Americans wonder why all immigrants do not just come to the United States legally or simply 'get in line' to gain residence (a 'green card') if they are undocumented. Yet few people understand how grossly out-of-date the U.S. immigration system is and how unable it is to keep up with the demands of a growing and changing U.S. economy and to reflect the needs and values of our diverse nation. Lawmakers have failed for nearly 20 years to update our immigration laws or address the limited opportunities for securing legal immigration status. Today's overly restrictive legal limits on green cards mean that virtually all undocumented immigrants have no avenues for legal entry to the United States."

When you consider the violence, the devastating poverty, and the failure of our immigration policy, can we really blame them for coming by an means they can?

Read the essay that started it all -- with more than one million views and read by people in more than 140 countries.

Other essays in this series:
LaMonte is an author, missionary, and business consultant who lives in Chicago, Illinois. When he is not writing science fiction novels or helping his clients, you can find him serving the people along the Amazon River in Brazil. You can learn more about his work at www.lamontemfowler.com.
Download
Calling all HuffPost superfans!
Sign up for membership to become a founding member and help shape HuffPost's next chapter
Join HuffPost