For 41 years, the city of Seattle enjoyed NBA basketball. And then the Sonics moved to Oklahoma City and became the Thunder.

Across the past year, though, there was hope that the NBA was returning to the Emerald City. Sure the team was the Kings -- a squad that has lost at least 65 percent of their regular season games in each of the past five seasons -- but if they came to Seattle, other NBA teams would have to come as well (hey, the Kings-SuperSonics have to play someone). And since the prospective owners (a group led by Chris Hansen) of the "Seattle Kings-Supersonics" offered a purchase price equivalent to an enterprise value of $625 million -- more than anyone else (and more than anyone has ever offered for an NBA team) - it seemed likely that in a market economy (where the highest bidder tends to get the product) that the NBA was coming back to Seattle.

Unfortunately, Seattle learned this past week that the NBA doesn't quite follow the rules of a market economy. For Seattle to get the Kings, the other 29 owners had to approve the deal. And when the dust settled, a majority of those owners thought an inferior bid from another group that wanted to keep the team in Sacramento was preferred. Consequently, Seattle has been frustrated again.

Of course, just a few years ago the owners allowed the Seattle SuperSonics to depart for Oklahoma City. And the New Jersey Nets just moved to Brooklyn. So franchise relocations are not exactly uncommon in the recent history of the NBA.

And that brings us to a more cynical view (and economists love to be cynical!).

Here is how Ira Boudway of Bloomberg BusinessWeek described the owners' motivation.

More than anything else, the Sacramento saga is about public funding for arenas. The NBA, like the NFL and MLB, wants to reward cities that help pay and punish those that don't. Seattle lost its team in 2008 because it refused. When Sacramento Mayor Kevin Johnson came up with a promise to secure $258 million in public funds for a new arena, the league felt bound to keep up its end of the deal. "You've got to match the offer, have a building, and get a good ownership group that can make it happen, and it happened," Commissioner David Stern said at the press conference yesterday. The Kings, of course, already have a building. Stern meant a new building, replete with lots of luxury boxes subsidized by taxpayers.

So the NBA, according to Boudway, chose the Sacramento offer because it wishes to continue the flow of public funds to the NBA. As Robert Baade and Victor Matheson note, in the past 20 years we have seen more than $3 billion of public money spent on NBA arenas. Consequently, Hansen's offer might have been crippled by the fact Seattle's arena did not require any public funding that wasn't generated directly by the new arena (and the fact that Seattle lost its team back in 2008 because it did not provide public funding for a new arena).

It is really not possible to know if the NBA owners are keeping the Kings in Sacramento because of how Sacramento funding its arena. What we do know is that for Seattle to get a team in the future, the owners in the NBA are going to have to bless such a move. And that is because the NBA is really a command economy.

There is, though, a different approach (as I once discussed in this forum in 2011). Consider how Cardiff City and Kingston upon Hull have acquired an English Premier League (the top division in English soccer) team for the 2014 season. Each city had a team in the Football League Championship league (the second division in English soccer). And when these teams finished first and second in 2013, Cardiff City and Hull City were promoted to the English Premier League (the winner between Watford and Crystal Palace on May 27th will yield a third promoted team).

The mobility in this system is quite interesting. Stefan Szymanski, co-author of Soccernomics (both the book and the blog), graciously provided data on what teams were in the top four divisions of English soccer since 1960 (as noted, the names of these divisions has changed over time). What follows are all the teams who have played at least one season in each of these divisions in the past 53 years. 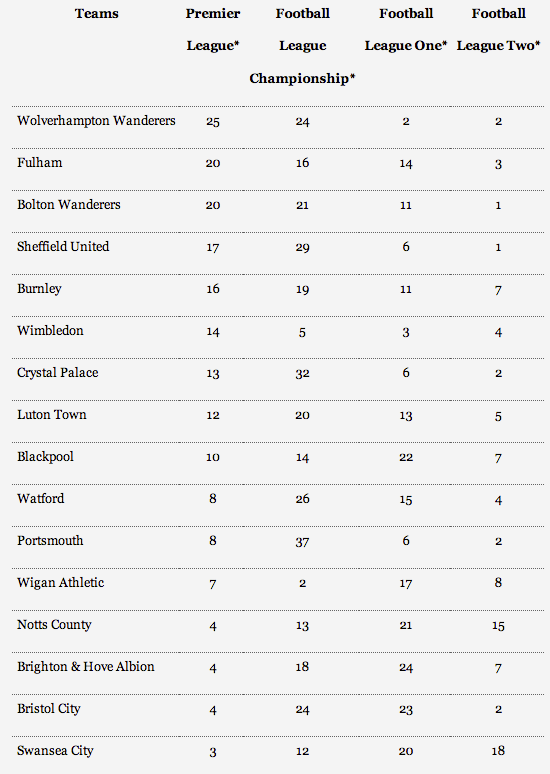 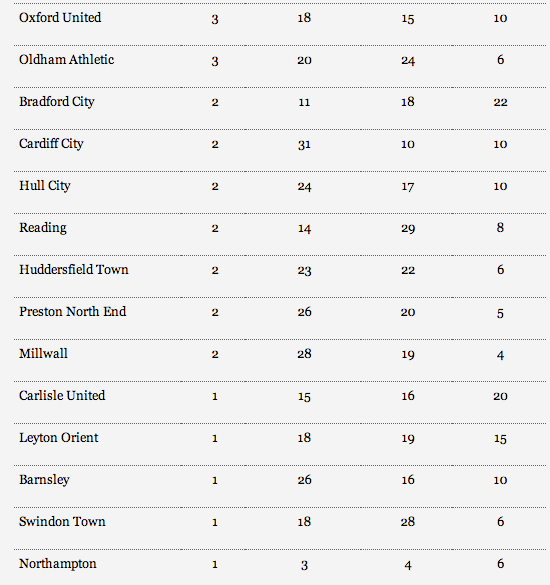 * these are the current names of these divisions. Over time, the divisions in English soccer have had different names.

Such a demotion, though, is not a death sentence. In fact, the above table makes it clear that where ever a team is currently, better performance (or worse performance) can change a team's league in the future.

It is important to emphasize that all this movement doesn't require any appeasement of the existing owners in the league. Teams rise and fall based on their performance on the field of play. The wishes of the other owners are simply not relevant.

The system of promotion and relegation is seen throughout European sports. And that means that in European sports, success is rewarded and failure is punished. Again, much like you would expect in a market system.

In contrast, the U.S. system rewards failure. Despite being losers on the court, the Kings sold for a record amount and the team has been rewarded with high draft pick in the 2013 NBA draft. In addition, the NBA is a command economy where the owners decided which cities get to have teams. And how much people are willing to spend on a team is not necessarily the deciding factor.

If Phil Jackson is a good judge of owners (and Jackson, with 11 NBA titles, might know something), Hansen has a good chance of being a successful NBA owner. But despite having the money and desire to purchase an NBA team, Hansen is not going to be allowed to compete in this market. And that is because the NBA is only about competition on the court (and they don't have much of that -- but that is a story for another day).