Sewage beer sounds like something out of a dystopian movie or someone's terrifying, unsavory nightmare. We've seen beer made from seaweed and whale bones, but of all the weird and wacky ingredients used to make craft beer, sewage is by far the most unappetizing. But could it catch on? Oregon's Clean Water Services is putting money on it. The water resources management company is backing an initiative to use purified sewage water to make beer.

In an article published on January 28, NPR reported that Clean Water Services is pursuing this goal to show off the possibilities of recycled waste water. If it succeeds, the company will not only turn sewage into a drinkable product, but a desirable one at that. It's one thing to turn waste water into potable drinking water; it's another thing entirely to turn it into the nectar of the hops gods.

Clean Water Services has a lot of hoops to jump through before this beer becomes a reality, however. NPR reported that the company has requested permission from the state to allow a group of home brewers called The Oregon Brew Crew to try their hands at making beer with sewage water. Next, in April, the Oregon Environmental Quality Commission would have to approve of the plan, and if that happens, the state will have to okay amendments in the Recycled Water Reuse Plan. So far only the Oregon Health Authority is on board.

As it stands now, "the state of Oregon doesn't technically allow anyone to drink wastewater, no matter how pure it is," NPR said. Recycled wastewater is only sanctioned for "irrigation, industrial processes and groundwater recharge." 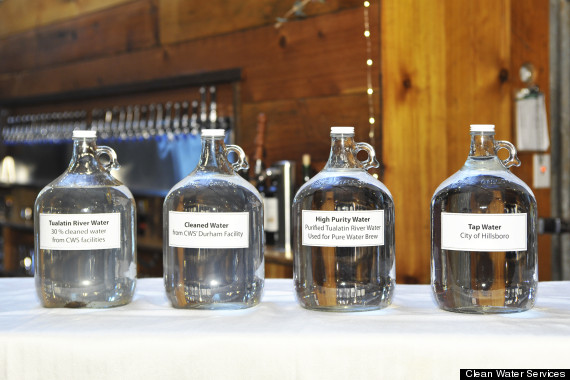 Mark Jockers, a spokesman for Clean Water Services, told NPR that his company's water purification system has the technology to recycle waste water into acceptable drinking water: what it calls High Purity Water. The three-step process involves ultra-filtration, reverse osmosis and enhanced oxidation, NPR explained. Ultra-filtration pushes liquid through a semipermeable membrane and separates out bacteria and other microorganisms. Reverse osmosis is the process used to desalinate -- or remove salt from -- seawater. Enhanced oxidation "uses ultra-violet light and an oxidizing chemical to break down contaminants." Need a beer to wash all that down?

The real question is, what will sewage beer taste like?

Jockers told HuffPost Taste that "the water has a very flat taste." He explained that most bottled water contains minerals and salts "to provide a mouth feel, a taste." Clean Water Services' High Purity Water, however, lacks those minerals and salts. Jockers says it's easier for brewers to build a beer with a specific flavor profile if the water doesn't already contain minerals and salts. Brewers find the purified water's "blank slate" exciting.

Jockers isn't the only one vouching for the High Purity Water for brewing beer. In a competition sponsored by Carollo Engineers and The Oregon Brew Crew last summer, a collection of home brewers tried making beer that had to consist of 30 percent purified waste water from Clean Water Services. One brewer told The Oregonian that the purified water was totally tasteless, which was a good thing. Another brewer told The Portland Tribune that he thought the water was "very plain. [He] saw it as a blank slate.” Clean Water Services is currently proposing that the Oregon Brew Crew be allowed to make beer that is made with 100 percent purified waste water.

Jockers said that Clean Water Services' goal isn't limited to recycling waste water into beer. "This about changing the conversation about water and the best place to have a conversation is over a beer," Jockers told HuffPost Taste. He's definitely right about that. And if sewage beer is going to make it anywhere, Portland would be the right place for it.

"There is nothing remarkable about this," Jockers told us. The key issue is that Clean Water Services is acknowledging and drawing attention to the finite resource that water is, and the capacity we have to recycle it. Jockers put it this way:

Clean water is precious. As drought conditions continue to threaten sources of clean water in Oregon, California, Texas and across the west, it has become apparent that we need to carefully consider how we use water. All water is reused water and natural systems recycle water continuously. We need to judge water by its quality, not its history.

Now sewage beer doesn't sound so bad after all.

Watch this video to hear more about the "sewage brewage" project: