Republican Sharron Angle's Senate campaign is sending out a mailer calling Harry Reid (D-Nev.) "an illegal alien's best friend," the latest in a series of controversial ads that attack the Senate Majority Leader on immigration. 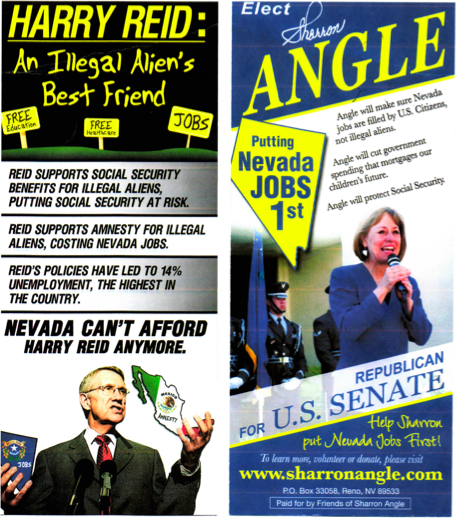 The language in this mailer is similar to an ad Angle released last month, also calling Reid the "best friend an illegal alien ever had." The ad featured menacing men with flashlights walking along a chain-link fence beside images of innocent-looking families and working people. "Illegals sneaking across our border, putting Americans' safety and jobs at risk," the ad's narrator intoned.

The ad was so controversial that Tibi Ellis, who chairs the Nevada Republican Hispanic Caucus and occasionally "moonlights as a spokeswoman for Sharron Angle," denounced it. "I condemned this type of propaganda, no matter who is running them, where they blame Mexicans as the only problem and where they attack them as the only source of illegal immigration," said Ellis. "I don't agree with that."

Angle's campaign also recently released another ad on immigration, using the same picture of flashlight-wielding men, but also three scowling Latino men (who aren't actually undocumented immigrants). The Wonk Room's Andrea Nill pointed out that the three men were from the same stock photo used in an ad by Sen. David Vitter (R-La.).

"Sharron Angle is going way over the line with her anti-Latino campaign ads," said Adam Luna, political director of America's Voice. "While claiming to target the issue of unauthorized immigration, her campaign puts out a mailer demonizing the entire country of Mexico and her television ads paint a sinister picture of Dream Act-eligible youth who are, in reality, the poster children for the American success story. This is race-baiting at its worst, just like the Bush 'Willie Horton' ad or the Jesse Helms 'hands' ad. But in a state like Nevada, with its growing Latino population, this sort of thing may very well come back to bite Nevada Republicans where it hurts."

Reid campaign spokesman Jon Summers disputed the facts in Angle's mailer, saying, "Sen. Reid has never supported and will never support benefits for people who are in our country illegally. His record shows that. Angle is simply using divisive tactics to distract from her extreme agenda to kill Social Security, privatize the VA, and ship jobs overseas."

The Angle campaign did not return a request for comment.