"It's midnight- I can't sleep! I can't think, I can't, I can't, I can't. August 13, 2004. What a horrific night. I can't take the image out of my mind. It's so hard to believe that our families, our very own people were burned alive and no justice has been served! I can't take it, I just can't understand! Lets' all be strong."

"Espy," Esperance Mfurakazi Nasezerano, was venting her fear and anxiety on Facebook. What happened to her on that night in 2004? She was eleven years old and living in a tent at a United Nations refugee camp in Gatumba, Burundi when Front National de Liberation (FNL) rebels, with Mai-Mai, Interahamwe perpetrators of the Rwandan genocide, and soldiers from the regular Congolese army entered the camp. Death was in their eyes and evil had taken over their souls. They were murderers, driven by forces of darkness, setting fire to tents and using machetes and traditional arms to massacre the Banyamulenge refugees. Espy was shot in the back and played dead among the dead and dying to survive.

The FNL is a predominantly Hutu rebel movement known for its hostility to Tutsi and especially the Banyamulenge. The next day, a spokesman for the FNL, Pasteur Habimana, told the BBC that his group was responsible for the massacre in which at least 166 Banyamulenge were slaughtered. 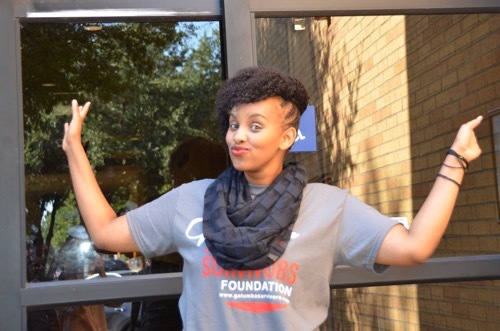 It is no wonder that Espy could not sleep. It is not only the damaged muscles and tendons in her back that held merciful sleep at a distance. As she tossed and turned, wrestling with memories that are a life sentence of pain, Espy contended with the reality that the murderer of her family and friends, FNL member Agathon Rwasa, is now a deputy speaker of Burundi's parliament.

But Espy is a survivor. After being relocated to the United States, she studied, learned English, became an American citizen, and graduated from the University of Texas at Arlington with degrees in International Relations, International Political Economy, and a minor in African studies. Her goals include becoming a diplomat and getting a law degree.

I met Espy at the Eleventh Annual Gatumba Memorial at the University of Texas in Arlington. She was the chief organizer of a weekend that was planned as a mechanism for reconciliation and healing. But the Congo conflict has tentacles that almost strangled the event. Free speech and university concerns about inclusion required that an opposing group, a group whose members share anti-Tutsi sentiments, be given equal time and equal space on the campus. I had not been waiting outside the venue for longer than a few minutes when a member of the Congo Freedom Alliance sat me down to tell me his version of the history of the Congo; blaming the deaths of 6 to 10 million on the Tutsis. I asked him if he truly believed this and he backed off, saying, "this is my opinion."

"Rya Joro" means "Unforgetable Night or Bad Night." It is sung by Banyulamenge survivors and others.

The University was caught in the middle of the Congo conflict and so was I. I thought I had left this kind of hate speech 10,000 miles away. The Banyamulenge are not recognized as Congolese, even though they have lived in the hills near Mulenge for at least 400 years. Historians agree that the community existed before the colonialist era. They are reviled because of the language they speak (Kinyarwanda) and because of their physical appearance.

Two polarized groups were gathered on opposite sides of the meeting hall, and the question of the day became "What was the anti-Tutsi Congo Freedom Alliance doing at an event designed as a day of mourning for the Gatumba massacre victims?"

Professor Richard Millsap of the Political Science Department was caught in the middle too. He lobbied hard with the University to have both events continue.

When the university attempted to prevent us from meeting on campus, I countered that since is a "public" building and used by many other groups, like the chamber of commerce and city council debates and so forth - it can hardly prevent Americans of African descent (including UT alumni and their families) from using it for constitutional free speech-free assembly purposes and if the administration will not allow the political science department to sponsor the event (s) (which would have meant waived fees) then we will still meet and pay full fair like any other external organization pays.

Espy was faced with offering a compromise. Her goal is to become a diplomat and this would be her first test. The members of the Congo Forum were given the opportunity to take over the morning schedule and present their point of view. It was a point of view that the Banyamulenge politely listened to, but for some, it only deepened the pain that they had gathered to assuage. A member of the Congo Forum dismissed the massacre as "something that happened somewhere," and added a subtext that blamed the Tutsi for all of Congo's ills.

One of the speakers offered a head-spinning suggestion to the survivors. "The Banyamulenge people will never be in peace unless they acknowledge the suffering of their fellow Congolese."

I asked Espy about this. "If people cannot understand my pain, how can they understand the pain of 6 million?" she said, tears welling in her eyes.

There was some politically correct conversation about "everyone being a victim," and that Congo's ills are based on bad governance, but this was a fig leaf for palpable distrust and misunderstanding. This was the reality and the ghosts of Gatumba were prowling the open spaces between the Bluebonnet and Rosebud meeting rooms.

Were the ghosts dancing to the Banyamulenge music drifting through the hallways, or were the spirits crying out with the text on the screen in the Bluebonnet room, "Oh God you are our only refuge?" I sensed the ghosts, while across the hallway the Congo War continued.

Images from the Memorial

Olivier Mandevu, President of the Gatumba Refugee Survivors said, "When genocide happens in one place it is knocking on the door of the next victims," appropriately setting the tone for the afternoon's testimony.

Finally the healing ceremony for the Banyamulenge was about to begin. The testimony was brutal and heart-rending and revived images of a hideous massacre in a camp supposedly under the protection of the United Nations. 1,700 refugees were at Gatumba on August13, 2004; the scene of largest civilian massacre in Burundi at that time.

Here is the testimony of one of many witnesses that afternoon. 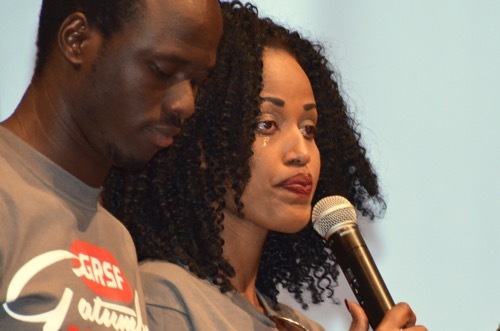 Noella during testimony and used with permission

Noella (last name withheld) stood on the stage with two others. She was crying, but fighting the tears, and holding the hand of the young man who stood next to her.

"You see only three of us but we are not the only ones. We all lost both parents. How does it feel to grow up without your parents? I am thankful to God that we have been able to survive.

"I was with my parents and my siblings and lost my parents and three young sisters that night. It was around midnight and we were just coming from choir practice and we were about to go to bed when we started hearing guns. My Dad was not in our tent, but he came to me and his last words were that my sister was bleeding all over. He said please take courage and take care of your younger sister even if I die. But my younger sister died.

"Gunshots were all over, and people were being killed by machetes. I saw all of this.

"I asked myself why should I die inside the tent, so I escaped from the back of the tent. I tore it apart and spent the night in the woods and I know God was protecting me. This is the message I would like to convey."

El Memeyi Murangwa, a Congolese torture survivor, said that following the FNL's admission of responsibility for the Gatumba massacre, "the Burundian government issued arrest warrants for the group's leader, Agathon Rwasa, and declared its intention to refer the matter to the International Criminal Court. The United Nations issued a resolution condemning the attack, and the African Union declared the FNL a terrorist organization. No arrests have yet been made."

And what was El Memeyi's crime?

He wrote a newspaper article about the genocide of the Tutsi people and asked the Congolese in power to halt the massacre of innocent people.

And so it went for two days. There were lectures on the effects of Post Traumatic Stress Syndrome, prayers, food, and a rousing Sunday morning church service where survivors could shout to God in Kinyarwanda without fear of reprisal.

After it was all over, I asked Richard Millsap, the political science professor caught in the middle, about his impressions.

I thought it was outstanding. The first time in history since the Rwanda/Burundi violence spilled over into Zaire in 1994 that the victims of war have had an opportunity to gather together as one people, rather than ethnic groups. While there may be some individual critics, on the whole the feedback I have received from leaders on both sides has been overwhelming. No one is naïve to think a 2 day meeting will result in peace, but every journey begins with a single step.

In the end the Banyamulenge need more than debate and the spectre of imagined reconciliation. They need repatriation under international protection.

And Espy? She learned several days before the event that an uncle and several friends had just been killed in Congo.