Here is a photograph by Carolyn Marks Blackwood which I found moving and powerful. 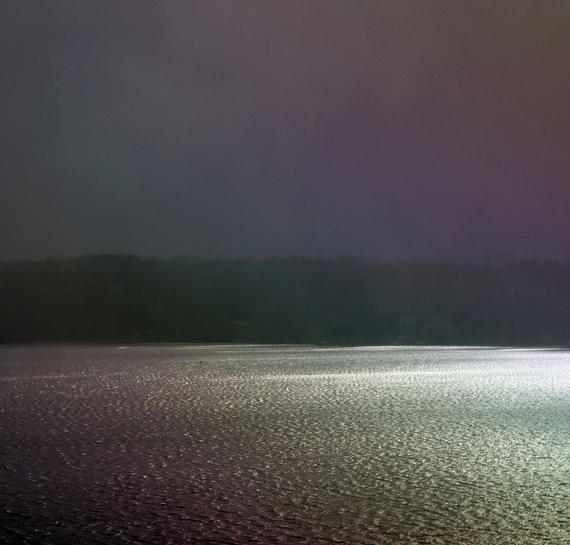 So I'd like to explain to you some of what I saw.

Blackwood joins in here with the rich history of landscape painting. Landscape is not an easy genre: nature is unruly, and does not wish to order itself into compositions pleasing to our sense of proportion. It is thematically difficult as well. Why do we look at landscapes? Because they are beautiful? Some are, and beauty must surely be a part of it. But beauty, in its fiery and terrible sense, is difficult to keep straight in this context, in which so much treacly prettiness is possible. Let's leave aside the troubled concept of beauty for now. I think there are three fundamental reasons we learn the difficult skill of seeing landscapes in art, and through art, in nature:

We see in them, as we see in still lives, the soulfulness of things. Soul is not visible to us in human life alone. It becomes visible, through long study, in a stone, a chair, a bowl. And similarly, the texture of light in the woods, the sweep of a valley and ridge of a mountain, make their inner lives clear to us if we gaze at them intently. We do this naturally at first, and when we have grown too old and jaded to see things clearly as they are, artists guide us in learning to do it again.

Second, the study of landscape - of nature - returns to us a sense of awe. It is dramatically and insistently larger than we are. One age after another has discovered for itself, as if for the first time, a sense of the sublime in nature. But surely this sense has persisted and refreshed itself since men first scanned distant horizons and stormy skies.

Finally, we study landscapes because of their narrative resonance. Relative to actual human experience, they are abstract and indirect. But as in the case of music, also abstract and indirect, we can make out in landscape the story of ourselves, of the ideas and emotions and transitions which give shape to our lives.

Blackwood is of a kind with the landscape painters in drawing out the soulfulness, the sublimity, and the humanlike in nature. She is not painting here, but she is scarcely taking a photograph either. The camera has a strong desire to see everything. Contrast that with how much is unseen in Blackwood's image. The wavelets in the foreground are crisp and clear, but the woods on the far shore are murky, the treetops nearly blending into the overcast sky. The woods and sky are rendered with the simplified economy of painting, subtle gradients all that keep them from flattening into the merest shapes. Not only is key detail edited out of the image, the image, in a sense, is edited out as well. What natural phenomenon does this image depict? It depicts sunlight breaking through cloud, and falling on unquiet waters. So where is the sun? And where are its sparkles on the river? They are nowhere to be seen, because Blackwood has framed them out.

She has turned her camera aside from the direct prospect, leaving only the lesser glare upon the water, and the start of a numinous glow which animates the volume of storm-dampened air between us and the far shore.

Two different aspects of this picture recall to me two different painters. One is Bruegel, who hides Icarus in an insignificant corner of his broad landscape. 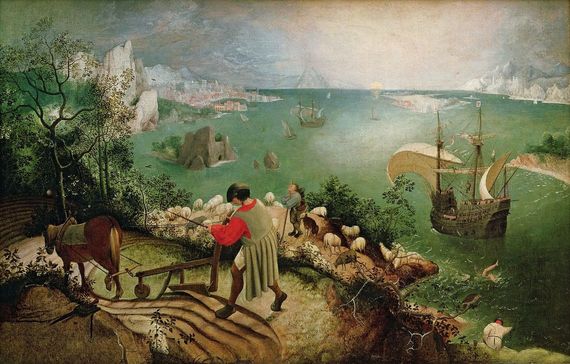 Here too there is a central story, shuffled off to the side, nearly to the point of its disappearance. Two modern poets gave voice to this unbearable eccentricity. William Carlos Williams reproduced the offhanded cruelty of it in his Landscape with the Fall of Icarus, describing the entire scene before remarking:

unsignificantly
off the coast
there was

a splash quite unnoticed
this was
Icarus drowning

While W. H. Auden, in his Musée des Beaux Arts, writes from the affronted perspective of a humanist who has not quite shaken off his expectation that tragedy should take center stage:

In Brueghel's Icarus, for instance: how everything turns away
Quite leisurely from the disaster; the ploughman may
Have heard the splash, the forsaken cry,
But for him it was not an important failure; the sun shone
As it had to on the white legs disappearing into the green
Water, and the expensive delicate ship that must have seen
Something amazing, a boy falling out of the sky,
Had somewhere to get to and sailed calmly on.

Yes, this is what Blackwood performs as well: an essential turning away. Consider her standing on her cliff, surveying the Hudson River, the storm at its end, the sun returned and shining down on the waters. With the awful forbearance of the artist, who closes the gate on spectacle in favor of humble truth, she frames out the glories of the sky, allowing them to remain only as a suggestion, an implication, in a more austere and profound composition. The ripples on the water, the indistinct far shore, and a vast expanse of air beginning to fill with that numinous glow - these things, she teaches us, are enough and more than enough. More would be mawkish, whereas this fraction that remains already holds all the meaning the scene can offer.

The meaning, however, is not that of Bruegel. In this regard, she recalls to me the other painter, Caravaggio, who has never been surpassed in his identification of light with the spiritual. We cannot help but think of Caravaggio as feverish with desire for his salvation. We conceive him this way because the bare details of his criminal life tangle so wrenchingly with his desperate grasping after light in his work. He paints an enveloping, beckoning darkness, opposed only here and there by light, but he thirsts after this light, and the light fights an uncertain battle to save him from the terror of the void. In Caravaggio, as in Blackwood, the source of the light is unseen: Caravaggio does not depict what illuminates, but only what is illumined. Consider his The Calling of Saint Matthew: 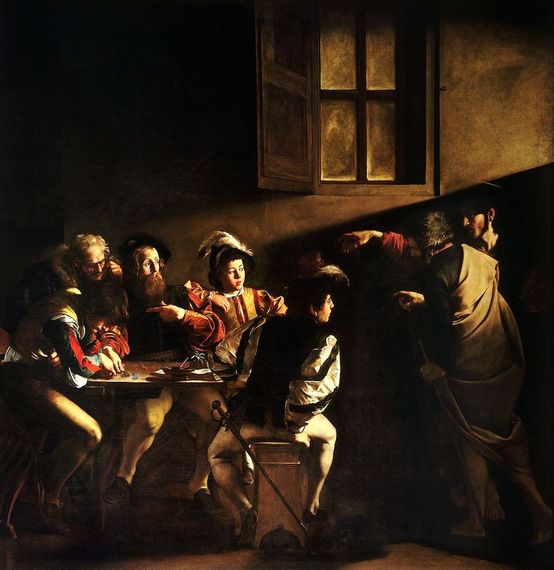 Here Christ summons Matthew with pointed finger, though which of the jumble of scoundrels is meant, Caravaggio does not make clear. Each of them turns at the sudden intrusion of light, as if the room had swum in dimness only a moment before. What calls these men, exactly? In bare narrative terms, it is Christ who calls them. But in the picture, it is the light. They were plunged in darkness, and now the possibility of light is offered to them. Christ is not the source of the light; if the light were a character, I suppose it would have to be the Holy Spirit, hiding offscreen right, resting its redemptive authority in Christ. The light occupies space in Caravaggio, as it does in Blackwood, sketching out its shape against the rear wall.

Blackwood's light, its source and zone of greatest radiance offscreen, reminds me of Caravaggio's light. It breaks upon a world indistinct and lost in gloom, with a terrific redemptive force. It falls on some but not all objects, suddenly and sharply defining those it touches. It fills volumes of space, as if the gasping world, crying out for it, inhaled it and was transformed. It portends an unbearable intensity, but its touch is gentle, as if it moderated itself to the infirmities of those it would save. Where there was darkness and fear and despair, it brings comfort and hope. The river ripples beneath its touch, tapping out a nearly musical rhythm, and the violent sky is soothed and brought to heel. The entire surface of the image shimmers with it; local colors and values are not those of the landscape alone, but of the landscape with a scrim of light laid semi-visibly atop it. The light is a second character, an active participant, a thing which cannot be touched but which is continuously present.

This density and profundity of meaning - a meaning which I needed from some art, any art - is what struck me so powerfully in Blackwood's photograph. Photography, which mechanically compensates for the laziness of the eye with a miraculous clarity of unearned sight, breeds endless photographs. We are seized by an undertow of thoughtless photographs, photographs which, when beautiful, often fall into the category of that treacly prettiness we discussed before in landscapes. In contrast with these, Blackwood's piece feels, to me, considered, digested, expressive. It transcends its medium, as all art must, to speak soul-to-soul. It is the mature product of a mindful eye and hand.

Blackwood's work appears courtesy the artist. All others via Wikipedia.