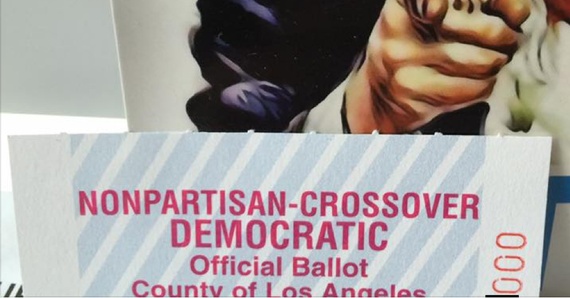 Julie Tyler, an election observer who volunteered to make sure our democracy is on a good footing, went to the LA County Registrar's office on June 20 in Norwalk, California.

All vote-count observers are given an escorted tour of the ballot counting facilities, but this was Tyler's fifth visit to Norwalk. She had seen the provisional ballots removed from large fluorescent green envelopes to sit in piles of pink envelopes, each holding one ballot. By day five, there were many such provisionals placed in a box of "snagged" ballots. They would receive special "de-processing."

"I was interested in understanding why the provisional envelopes were ending up in the 'snagged' box," said Tyler. "As the rest of my small group exited the room with our escort, I noticed on the top of the pile in one box an envelope from a No Party Preference (NPP) voter, who had stated in the affidavit section, 'Democrat' and who was given a Democratic ballot."

In California, people who identify as 'independent' register as No Party Preference, however, they are allowed to vote for president using a special Democratic, American Independent Party, or Libertarian crossover ballot in counties which opted to use crossover ballots. Different counties used different methods to prevent NPP voters from voting in the Democratic County Central Committee elections, while still voting Democratic in the presidential primary.

Tyler asked the supervisor, Tim, how these ballots would be reprocessed. "He said the ballot needed to be remade into an NPP ballot. I said, 'but that would mean there would be no section for the presidential race.' He said, 'Correct.' I said, so you mean it will be canceled? He said, 'Yes.'"

Tyler persisted. "I asked him to pull out another ballot randomly from the box. In the span of 60 seconds, I saw three provisional envelopes suffering the same fate. I confirmed with him that these non-partisan voters and their ballots were being remade into NPP ballots in the remake room."

Tyler and three other observers entered the remake room. "We all stood behind one of the clerks in front of her computer. She showed us how she scans the NPP ballot into a computer, canceling out the offices/races for which the NPP voter may not vote, then manually with a green pencil, marking an 'X' in the corresponding boxes." Thus, independent voters without a special crossover ballot were having their votes for president thrown out.

Tyler asked, "which ballot would have been correct [so that NPP voters could cast a vote for president]? What does it look like? Please show it to me."

Tim showed her an example crossover ballot. But the non-crossover Democratic ballots placed in provisional envelopes had all the information necessary to count their vote for president. Tyler said, "the intention of the voter is clear. It is written on the outside of the provisional envelope in the form of an affidavit." The observers all had the same concern. "Why is this voter's presidential vote being thrown out?" Tyler asked. "Tim really had no explanation, and at that point we all said we needed to talk to his supervisor right away."

Aaron Nevarez, Executive Assistant of the County Clerk, who reports to Dean Logan, Registrar/Recorder, came to meet them. For a half an hour they discussed the issue. The observers requested a halt to the reprocessing of provisional ballots. They asked exactly how many had been reprocessed and what caused them to have Democratic ballots. Did they run out of the crossover ballots at the precincts? Were the poll workers uninformed, and simply gave out the wrong ballot?

Tyler said, "Nevarez said they needed to 'understand the scope of it and would not be halting the process just then.' He then agreed to go make inquiries and get back to us with a response."

About an hour later, Nevarez returned saying that he had news that would please the observers. "He said they would no longer be remaking the Dem ballots as NPP, but rather crossover Dem, and that they would gather all of them which fit that criteria and put specific clerks on that task." But how many provisionals had been reprocessed already, and would they start over? Tyler reported, "Nevarez said, out of 4,000 provisionals we have counted thus far, 25% fit the same criteria. More importantly, we asked if they would go back, retrieve the ballots that had already been reprocessed and retroactively remake them the proper way. He replied yes. He said they were going to compile all of those particular ballots, put specific clerks on them to process them." Who had made this decision? Nevarez, said Dean Logan.

The election observers wanted a guarantee that Dean Logan would take the matter all the way up to Secretary of State Alex Padilla. Los Angeles is just one of 58 counties in California, and it was unknown how many of them used crossover ballots.

Volunteer observers held a conference call with every team lead statewide to watch for these ballots, to make sure they would be counted correctly. But San Francisco certified their tallies shortly after volunteers learned about the problem, and SF vote observers had experienced thwarted efforts to observe closely enough to catch it even if they were able to figure out NPP voters were being deprived of their vote for president.

Tyler tried to get more information from Mark, Ted, and Nick at the county registrar's office. Others tried reaching Alex Padilla, whether through their state senator such as Ben Allen, or through Dean Logan's office, trying to gain assurance that votes were counted. Tyler specifically expressed concern with vote by mail (VBM) ballots being returned with hand-written presidential candidates on their ballots. Again, in each case, the voter's intent was clear. When Aaron Nevarez agreed that "this issue falls under the category of voter intent" he was referring to the Democratic ballots, not every instance in which voters would show their preference for a candidate. Write-ins for Bernie Sanders on a Green Party ticket or write-ins for Bernie Sanders on an American Independent Party ballot would be wasted votes, according to the registrar's office. Voter intent be damned in those cases.

Tyler said, "If I were an NPP voter whose presidential vote was thrown out for any reason, I would be furious."

To report a problem with your voting experience, please fill out the California Voter Declaration at WatchtheVoteUSA.com.