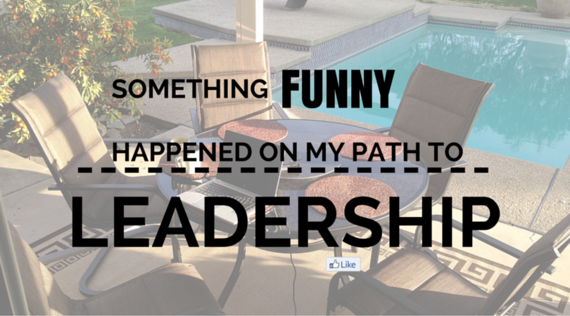 My leadership philosophy started with a backyard epiphany a few years ago. It was a beautiful sunny Saturday afternoon and, as a nerd, I was taking an online assessment of my leadership style. The results were similar to many of the others that I had taken over the years and were consistent with the common traits I identified with leadership. The results indicated that I was direct, decisive and a bit dominating. It described me as very bottom-line oriented, a self starter who enjoyed power and authority and took risks. I was satisfied with the feedback. My wife came out to join me and asked what I was doing. After a quip as to my nerd-like tendencies, she wanted to see the results. "Who is this describing?", she asked. "Because", she went on, "if you think it is you, you are kidding yourself."

"Take it as you, my husband and not as your work-self"

I was bewildered as this was coming from someone whom I had been with for nearly 30 years and knew me better than anyone. "Okay", I said, "why don't you sit and take it as me?" Once she completed hers, she challenged me to retake the assessment and then compare our findings. She cautioned me to "take it as you, my husband and not as your work-self". I did, and really took time to consider each answer with not just my mind but also my heart. Our results were quite similar and very different from the original findings. I guess this goes to show you, that when you don't really know who you are, ask someone who does.

When you don't really know who you are, ask someone who does.

My stage name was Boss. In that first assessment, like all those prior, I had subconsciously answered the questions in a manner that I felt was consistent with common leadership traits. When I was authentic and dropped my work-self and approached the questions as my true-self the results were telling. I was found to be steady, stable, predictable, even tempered and empathetic. I was further described as someone who wanted to avoid conflict and exist in a peaceful environment.

My stage name was Boss

Why such a dichotomy between my work-self and my true-sel? I was not faking it. The original answers were my honest perception of my work-self. How could the two results be so different? After all, I had a 25-year successful track record as a leader. I must have been doing something right. I wanted the real me to please stand up. I needed answers, so I reached out to those whom I lead over the years and asked them to describe me as a leader. What I learned was surprising to me. Although some of those traits listed in my first assessment were present, they weren't the primary ones. What I learned was that I listened to, cared for and validated those who worked with me. I was viewed as someone who was always learning. Someone who was consistent, even tempered, a little vulnerable and shared openly. Humor was also high on the list. Prior to this epiphany I thought that none of these traits were indicative of a leader. I was wrong.

Leadership is not about position power, it is something earned and cultivated. It is not appointed

I obviously hid my soft skills. We are conditioned to believe that those soft skills are a sign of weakness but, that too was wrong. I could be decisive, direct and take some risks, but that was just a small part of who I was as a leader. In truth, I was simply a human being who made others around him feel the same. What I recognized in my backyard was that leadership is not about position power, it is something earned and cultivated. It is not appointed; it is given by those you lead.

Elliot Begoun is a Business Growth Specialist and the Principal of The Intertwine Group. His purpose is to grow businesses and business leaders. He helps organizations establish strategic guardrails, develop integrative leaders, foster employee enlightenment and practice mindful marketing. Elliot works with businesses internationally serving as a consultant, coach, speaker and facilitator.

The article originally appeared in the GROW Blog.