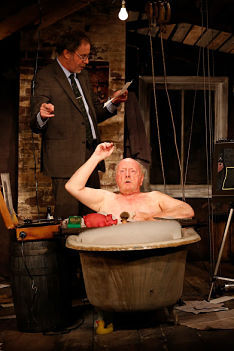 The Irish have a specific relationship to land -- whether they own it or not. Land, and all its myriad meanings, is the thematic undertow to The Quare Land, the latest production for The Irish Rep at Off-Broadway's DR2 Theater.

An entertaining, nicely paced two-hander, the play is set in a County Cavan farmhouse in 2012, though the year is immaterial. Ninety-year-old Hugh Pugh, (a marvelous Peter Maloney), an eccentric old man who hasn't bathed in four years, is taking a bubble bath. Hugh's home, judging from his bathroom, is shabby and neglected.

Content with the company of his dog, who he believes can talk, and occasional visits from his 91-year-old "alcho brother," he remains a spry, cantankerous old coot.

It is when he receives an unexpected visitor, Rob McNulty (Rufus Collins), that the old coot turns wily.

Businessman Rob has come with an intriguing proposition -- even if it takes him eons to relay it. Hugh is so accustomed to talking to himself, he barely acknowledges anyone else. And just when we're about to label the chatty geriatric nuts, the action shifts into gear.

Past grievances, hurts, decades' worth of anger bubble to the surface as this battle of wills emerges. There is a deal on the table. But what is really at stake is ambition, greed and an expert game of one-upmanship. All bets are off -- and anything goes.

Playwright John McManus has fashioned a cautionary tale that works, thanks to the deft performances. Maloney is pitch perfect as man who can turn like quicksilver, while Collins is a steady blend of generosity and desperation.

The production is aided by Charlie Corcoran's excellent set, which strikes a note of comedy and pathos. And while there are certain stretches in the script, it makes several key points. First, appearances are deceiving; second, that while money and power may corrupt, what's most corrosive to the soul is the casual cruelty that accompanies them.

No stranger to mental cruelty, Harold Pinter's Old Times comes to the American Airlines Theater with a celebrity cast. Both Clive Owen and Kelly Reilly are making their Broadway debuts in a story about the past haunting the present. 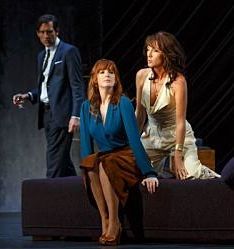 Anna (Eve Best) is back in England visiting an old friend, Kate (Kelly Reilly), and her husband Deely (Clive Owens). The two women were roommates long ago -- and they haven't seen each other in 20 years. Reunited in Kate's home, located in a desolate rural area, they rehash the past, or some version of the past, the trio hurl at each other.

Like Rashomon, there is no verifiable truth. Truth and falsity co-exist in the war of words. It's not reality the characters demand; it's the power to twist reality. Deeley and Anna vie for possession of Kate, each trying to stake a claim in the foggy real estate of memory.

There is talk of remembering Anna when she was dead and smearing Deely's face with dirt. The 1947 British film Odd Man Out is referenced. Unlike Pinter's Homecoming or Betrayal, Old Times isn't overtly volatile; it's restrained, keeping the characters and audience off-balance.

At 65 cryptic minutes, it's one of Pinter's least accessible plays -- and he is never one to leave viewers at ease. The language is sparse and the humor sometimes edgy, but laced with a dollop of psychic violence.

The setting is a cold living room, as if the characters have been transported to some semi-barren planetary surface, imprisoned behind a block of ice. It suggests the frozen door of the shared cell through which they glimpse the outside world.

Elegant and cold, it underscores the emotional void of their internal landscape. By placing the play in this purgatory of a space, director Douglas Hodge and set designer Christine Jones emphasize the emotional alienation of the three characters, while relating them to the contained romantic triangles in Beckett's "Play" and Sartre's "No Exit." Similarly, the inmates reenact their triangular romantic trauma for eternity.

Or as Anna notes of her friend, she waits for "the ripples to pervade and pervade the surface, for of course as you know, ripples on the surface indicating a shimmering in depth."

All three performances are sound, and their timing well calibrated by Hodge's direction. Clive Owen and Eve Best circle their cage and sniff their prey like polite, existential panthers. Kelly Reilly, in the most difficult role, neatly acts as a fulcrum to the seesaw power struggle until she claims ownership of her life.

But the ripples are disturbing and disorienting. These are murky waters.