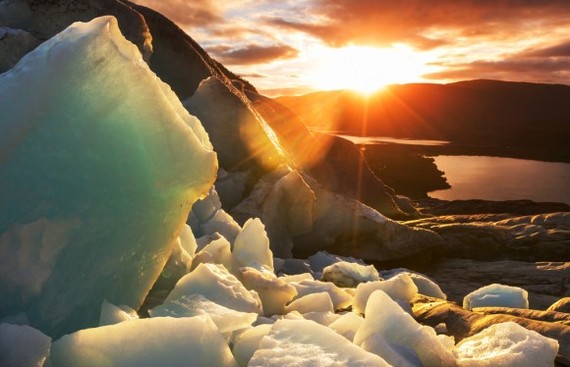 When extended family gets together over the holidays, dinner conversations can sometimes be awkward -- such as when your uncle from South Carolina talks politics with your niece from the Bay Area. When thorny questions about climate change arise over your Christmas ham, we've got you covered!

1. Is carbon dioxide actually bad for you?

2. How can carbon dioxide be called "pollution" if we breathe it out every day?

Pollution is a process that makes any aspect of our environment -- our land, air, water, or homes -- dirty, unsafe or unsuitable. Scientists are united in their understanding that our unprecedented and ever-rising levels of atmospheric carbon dioxide are already causing life-threatening changes to our climate. Carbon dioxide emissions are making our planet unsafe for us and, most importantly, our children.

3. What is President Obama's Climate Plan and will it actually help?

In June, 2013, President Obama released a "Climate Action Plan" to reduce our nation's carbon dioxide emissions. The plan lays out how the US can reduce its carbon emissions by 17 percent, compared to 2005 levels. The plan relies solely on Obama's executive powers -- thereby sidestepping Congressional involvement (Congress proved not up to the task of facing our changing climate during the epic fail of the 2010 climate bill). The most important action in the plan is -- drum roll please -- limiting carbon emissions from power plants. Because power plants account for 40 percent of all greenhouse gas emissions in the U.S., implementing a system that meaningfully and swiftly reduces these emissions is the single most important thing that our government can do to limit climate change. That's not to say it's easy. Or that it won't be blisteringly controversial. But it will, most certainly, help.

Tackling global warming can improve our economy, and this isn't just a pie in the sky prediction. It's already happening in the states that are participating in the Regional Greenhouse Gas Initiative (RGGI), a multistate program in the Northeastern U.S. and Eastern Canada that aims to limit greenhouse gas emissions through a carbon emissions market. RGGI has been auctioning emissions permits since 2009, and plowing the earnings into efficiency and renewables -- two crucial strategies for addressing climate change. And how do the economies of these states fare under the program? Swimmingly. According to a report from Environment America, "Between 2000 and 2010, the economies of the RGGI states grew twice as fast per capita as non-RGGI states, while cutting carbon dioxide pollution 25 percent faster per capita." Nationwide, in the past five years, we've seen a decline in carbon dioxide emissions even while our national economy is growing, albeit slowly. And what will climate change cost our country if we don't act to limit carbon dioxide emissions? We can expect a wrenching toll on our nation's economy, ranging from infrastructure damage to reduced crop yields to staggering insurance costs. It's a win-win to act now.

5. Why should we do something about this if other countries are going to continue to emit greenhouse gases?

Many other countries have already taken important steps toward limiting carbon dioxide emissions, such as taxing carbon and pouring significant resources into renewables, that the U.S. has yet to take. Meanwhile, the U.S. emits more carbon dioxide than all countries, but China, despite vastly different population sizes. Per capita, U.S. emissions of carbon dioxide are among the highest in the world, almost four times those of China. As a nation, we therefore have an outsize share of the global carbon dioxide burden while having done significantly less than other countries to address it. It's not fair. Plus, we need strong U.S. leadership in order to solve this problem globally. And for the U.S. to have the credibility it needs to lead effectively, we need to make progress on reducing our own emissions.

6. Where is our energy going to come from?

First, we can make huge improvements in energy efficiency, across all phases of energy production, transport, and use. A 2009 government summary of the research concluded that we could reduce our economy-wide electricity consumption by 20 percent through efficiency measures alone. That means getting all the same stuff we already rely on -- warm homes, light bulbs, charged smartphones, air conditioning, hot showers, convenient transportation -- with less energy. And as we improve our energy efficiency, we spend less money buying electricity and gas, leaving more money in our pocketbooks and our economy. Second, we can scale up renewable energy sources like wind and solar, which have already been rapidly expanding -- but there's lots of room for them to grow. Some scientists have developed a plan to power the world on solar, wind and water energy alone, proposing concrete steps to leave behind all carbon emitting energy sources within decades. It can be done, as long as we recognize the problem of carbon pollution.

Yes. Wind, solar and other sources, like geothermal energy, are expanding rapidly. Costs are falling. Renewables are gaining market share. Thirty-one states (and my city, the District of Columbia) have enacted energy standards for the power sector, increasing demand for renewables. Importantly, we don't have to pick what low-carbon energy sources should prevail. So long as we stop letting power producers freely dump carbon pollution into our atmosphere, the innovators and the market can figure out what are the least expensive, low-carbon sources of electricity.

8. How will this affect my children?

Children are bearing the burden of climate change already, suffering disproportionately from the health effects that are already here: extreme weather injuries and displacements, malnutrition and hunger from crop disruption, respiratory problems from air pollution, and increased illnesses as disease vectors expand their range. And children will bear the burden of our changing climate in the future: This is the world they will inherit. It's up to us to fight to clean it up.