It took me about 7 seconds to say that chant three times. Six seconds later another family in America entered the foreclosure process.

ACORN members know what that does to a family and to a community. So today, 300 ACORN members took over the Mitchell Courthouse in Baltimore, Maryland singing and chanting as they overwhelmed the 20 or so sheriff's deputies assigned to "protect" auctioneers from selling off foreclosed properties. 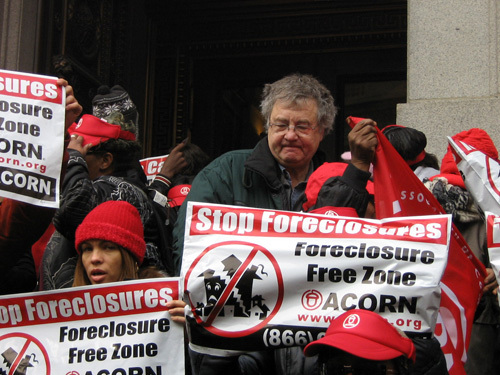 50 miles away in Washington, DC, another 120 took over two buildings on the same block where foreclosure auctions were being held.

In Baltimore, Donna Hanks, a foreclosure victim who lost her home a year ago - a home that still sits vacant in the bank's hands today - led the action and later talked to film crews about the turmoil she is going through. "I've moved six times in the last year - and I have a steady, union job. Families that are losing their jobs are even worse off than I am. That's why I came out today to help working people keep their homes."

In Washington, ACORN members snuck into one auction disguised as prospective buyers and then joined in the protest as marchers appeared outside the building. One of the building owners, angered that his property was being used to facilitate foreclosures, kicked the auctioneer out and ACORN members proceeded to follow him around refusing to let him sell homes out from under families.

13 seconds goes by pretty fast. We're talking four families every minute. It is no wonder that ACORN members are stiffening their spines, gritting their teeth, and fighting back in the face of the economic maelstrom engulfing the country. With Treasury Secretary Geithner announcing today the prospect of a $50 billion package of aid that addresses the crisis, we are heartened, but know that we need to take action now to keep hard-hit families in their homes and to keep pressure on our elected leaders to do the right thing.

Because it is one family every 13 seconds. 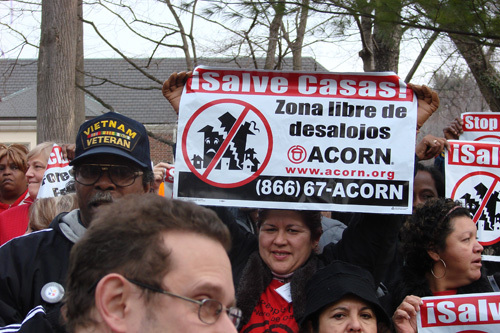 Today's actions are the continuation of actions that ACORN members have been taking for weeks to keep families in their homes, including a coordinated Day of Action on January 15th, when members in over 25 cities blocked foreclosure actions.

As part of the campaign, ACORN members are in DC today for our annual Legislative and Political Conference talking with their Congressional representatives about the need for immediate action to get Americans back to work and save the homes of working families.

Next week we ratchet up the pressure. On February 19th, ACORN is launching the Home Defenders, a program that links members of local communities with families who have taken the courageous step of refusing to cooperate with the foreclosure process. It responds to the desperate calls for help made by one family every 13 seconds.

It echoes the sentiments of leaders like Toledo, Ohio-area Congresswoman Marcy Kaptur who recently said, "stay in your homes. If the American people, anybody out there is being foreclosed, don't leave[.]"

The Home Defenders program is modeled on an ACORN action taken a week ago in Oakland, CA that saved the home of a West Oakland couple on the day of their eviction.

And we are partnering with the folks at Brave New Films in their launch of a new web-based resource for foreclosure victims and those in danger of foreclosure. Called Fighting For Our Homes, this is a way for people to have their own voice and tell their own stories about the foreclosure crisis - stories that show how real people and real neighborhoods are being affected.

If you want to join in the fight to get America back to work and end the foreclosure crisis in this country, you can join the Home Defenders, and sign this petition to President Obama asking for quick action. And visit Fighting For Our Homes to see foreclosure victims speaking for themselves.

Together we can get America back on her feet again.