Taylor Swift was the opening act for the 55th annual Grammy Awards on Sunday night.

The 23-year-old pop superstar sang her nominated song "We Are Never Ever Getting Back Together" at the Grammys. Swift teased her Grammys performance in the days leading up to the big event. She rocked a bedazzled white top hat and tails. Her over-the-top performance included men on stilts, ballerinas, and dancers dressed as rabbits. She ended the song with the line "So he calls me and goes, 'I still love you...' And I'm like, 'I'm sorry, I'm busy opening the Grammys.'"

"I think you should perform the song that's nominated," she told Ryan Seacrest on his radio show. Swift's "We Are Never Ever Getting Back Together," the lead single off her 2012 album "Red," was nominated in the Record of the Year category. ("Red" itself wasn't eligible for Grammys nominations, so expect to see Swift dominate the 56th annual Grammy Awards in 2014.)

Prior to performing on the Grammy awards, Swift was a little nervous.

"Oh my god, it's Grammy week, it's so hectic," she said to Seacrest. "I have a lot to plan for with the opening performance and I'm just really hoping all the pieces come together this week. Because this is when it really gets really crazy, but it's all very exciting too."

For more on the Grammys and Swift's performance, check out the liveblog below.

The 55th annual Grammy Awards have come to a close. Dan Auerbach from The Black Keys was a big winner, but Frank Ocean, fun., Mumford & Sons, Kelly Clarkson and Kanye West & Jay-Z were all honored with Grammys.

From all of us here at HuffPost Entertainment, we hope you enjoyed the show. See you again on Feb. 24 for the 85th annual Academy Awards. Your complete list of Grammy winners, from fun. to The Black Keys to Mumford & Sons.

Not enough Beyonce and nowhere near enough Solange. #grammys

You've Got To Fight For Your Right To Delta

Wow, the closing #Grammys jam was bumrushed by sponsor shout-outs. Thought it was MCA forever, not commerce forever.

The Broadcast Is Over

LL Cool J gets cut off saying good night on the Grammys. Hashtag that, LL.

This amalgam of rockers and hip-hop stars perform "No Sleep Till Brooklyn" to honor the late MCA. CBS, however, cuts them off with an rundown of the night's sponsors. Classy.

Closing the Grammys in style.

Tonight, They Are Young

"Still To Come, I Take The Stage"

Taylor Swift Grammys Performance: Pop Star Sings 'We Are Never Ever Getting Back Together' To Open Show
Grammy Awards 2013 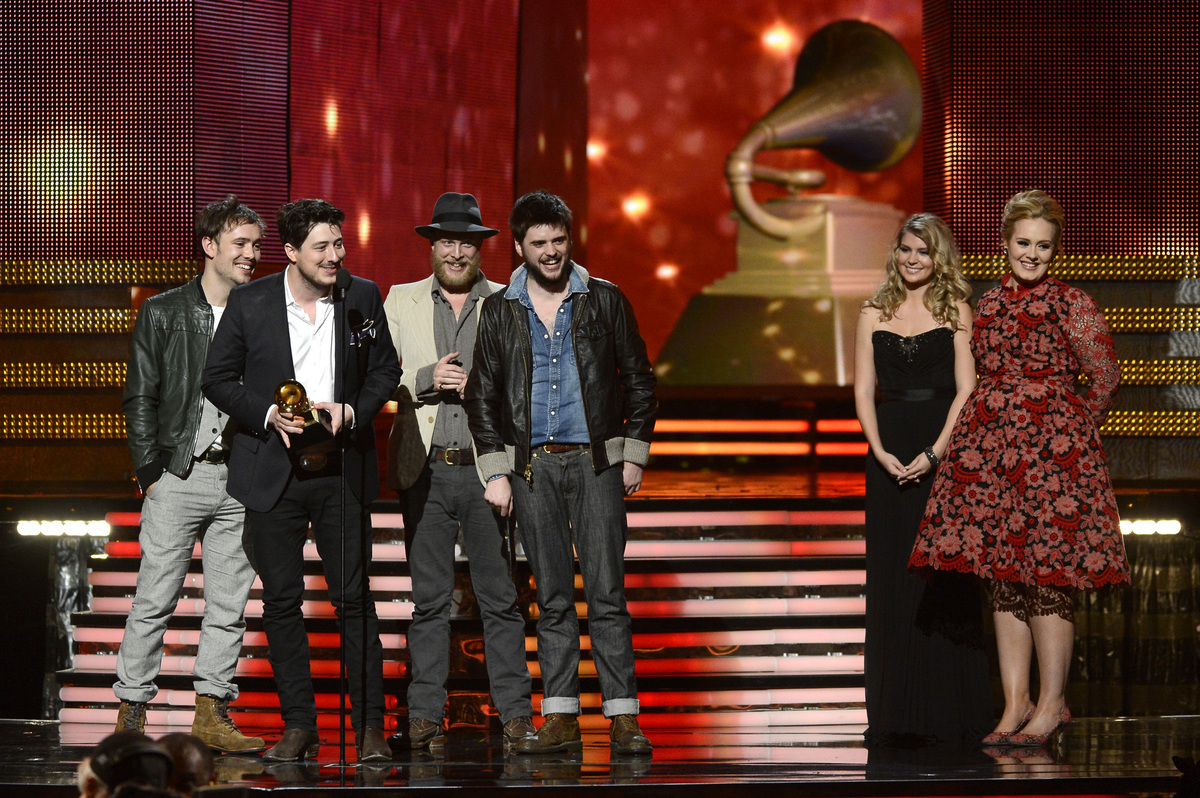