My first job was supposed to be as a dishwasher until my buddy heard me mention I was applying for the job and got there an hour before me. I ended up becoming the kitchen slopboy/custodian--mopping the basement and scraping out the grease under the prep table after the health department again threatened to shut down the swanky Pagoda.

The place is long-gone but I still have that first green pay-stub reflecting my 9 hours that July 1979--for $3 an hour. I remember looking at the top right and seeing $27.00 "gross pay" (pretty accurate considering the nasty work). Then at the bottom was "net pay" for six bucks less. It was my first non-paper route payday so after I cashed the check, I asked my dad who had ripped me off.

"Well," he said pointing out the little boxes, "that's the federal tax, that's the state tax and that's social security." 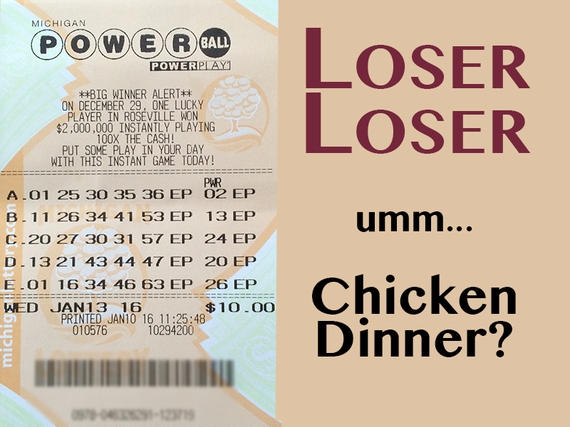 Since then, I've come to assume that the odds that the money I've put into Social Security might have been better placed on a racehorse named FICA." Perhaps even better odds were had last week on my $10 on Powerball.

The Tweets covering the odds of winning were hilarious...

Michigan's Gov. Rick Snyder is embroiled in a scandal involving his appointed Emergency Manager re-routing the water of Flint to avoid piping in Detroit's city water, choosing instead to send along via the public plumbing the polluted water of the Flint River until Lake Huron could be used.

This save-a-buck Emergency Manager that bypasses elected officials sent lead-poisoning into the homes of Flint, and may have caused thousands of cases of irreversible brain damage. He is not only back in the cross-hairs of Rachel Maddow and Michael Moore, but the US Attorney General's office and the Environmental Protection Agency...

Meanwhile, Gina Balaya, spokeswoman for the U.S. Attorney's Office in Detroit, said Tuesday her office is working with the U.S. Environmental Protection Agency on an investigation. She would not say whether the investigation is a criminal or civiI matter. (Detroit Free Press link)

Snyder, a venture capitalist, was re-elected in November 2014 and won by 4% of the votes--basically the population of Sterling Heights--a Detroit suburb.

Of the 7.6 million people who could have voted for Snyder or his opponent the highly capable, undynamic and unknown Mark Schauer, nearly 4.5 million people stayed home.

US Voters--the Toledo in the BCS Poll of Citizenship

If voter turnout were the BCS rankings, Belgium would be the Crimson Tide and the United States would be Toledo at #31. 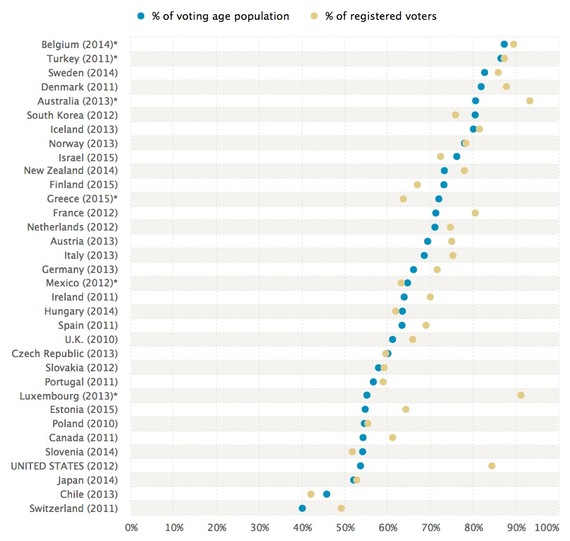 Fingers are pointed at Gov. Snyder whose "not on my agenda" pledge about not signing right-to-work bills led to him signing a right-to-work bill and who quickly reinstated the Emergency Manager with a 37-day end-around after voters rejected the position in 2012:

Following the measure's defeat, Governor Rick Snyder and state lawmakers quickly began the process finding a replacement for the law. On December 13, 2012, the Michigan legislature approved a new version of the bill which was then signed by Gov. Snyder on December 27. (link) 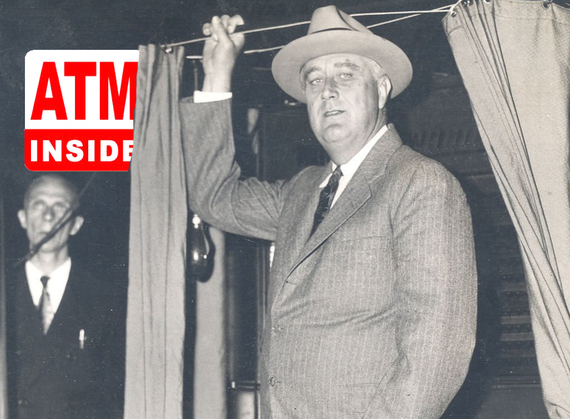 Let's examine those 4.5 million people who could very well be outraged about Flint's water and see if they can be coerced to the polls next November--or at least take 25 seconds on an app that sends an absentee ballot right to your recliner.

Options might include installing voting booths beside gas-pumps, public restrooms or lottery counters. But I'll go back to my first green pay stub and suggest an Citizenship Tax of $5 per paycheck. Then when you vote, you get a rebate from the state.

Imagine the revenue Michigan might have hauled in this past election if all eligible voters paid $120 per year into the till--even if every two years they got their $240 back, the interest alone would be staggering. Taking the last election cycle, here's what it would have looked like:

Just as folks are happy about that big tax-return (really your money lent to Uncle Sam for 12 months) they're probably going to show up in Belgium-like numbers to claim their winnings--even if it goes immediately toward 120 Powerball tickets. Worst-case scenario, if 100 per cent of us vote and the money does get paid back, the house still wins with the interest.

Surely CPA Rick Snyder would agree. And in the bargain the majority-winner will be elected from a true majority of voters.