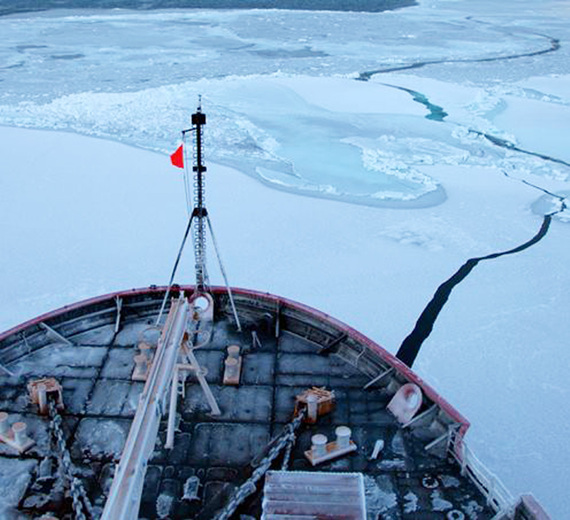 Image: USCG cutter Healy in the Arctic. Courtesy of Mathis/NOAA.

My concerns following attendance at the Arctic Circle Assembly in Iceland recently focus on the underlying premises around which the meeting and its on-going agenda and action plan were organized. While there was an apparent strong commitment to conservation and sustainability in all the declarations and documents, there was also the contradictory presumption that the Arctic is a place for inevitable economic development, in the form of minerals, oil and gas, shipping, and fisheries, all to be responsibly implemented for the supposed benefit to indigenous peoples and communities and, certainly, investors.

The World Wildlife Fund has a special interest in the Arctic manifest in its Global Arctic Programme that through its publications provides a comprehensive overview of the Arctic that suggests the best scientific and policy analysis available and does not hesitate to point out contradictions and omissions and the many specific impacts of natural and proposed change on marine species and human endeavor. In a 2014 edition of "The Circle", the WWF Magazine, the area is described as "the Arctic garden,", "a billion dollar ecosystem" "where the ocean blooms." The area is described as a zone of "high biological production...particularly vulnerable to human impact." Nonetheless, in the midst of this, there are established in-roads and continuous pressure to license, permit, and regulate exploration, extraction, and harvest that are the very activities that have decimated and exhausted other places on land and sea to the point that the remaining supply, becomes exponentially valuable. The paradox is obvious and enormous.

Around this, in meetings and laboratories, policy makers and scientists are engaged in designing research studies and defining "best practices" as a means to isolate, specify, and regulate these intrusions and to mitigate their effects and possible accidents and failures on the flora and fauna, ocean species, and human inhabitants for whom this ecosystem is a natural home.

Why put any of that at risk? Why suddenly must we harvest this garden, knowing full well the consequences of its reduced biodiversity and supply? Why should we drill there with all the concomitant risk? Why should we mine there, disrupt the sea floor, destroy habitat, generate enormous volumes of sediment, and release elements that may further interrupt established natural systems? Why should we fish there, further decimating stocks, corrupting feed ground, disrupting cycles of renewal and growth? Why would we send our ships there, spewing black carbon from inferior fuel, distributing invasive species, dumping waste, and increasing the likelihood of accident and environmental catastrophe?

Some 200 vessels passed through Northeast Passage across the top of Russia in the summer of 2015 during the opening of the ice for less than a three-month season, described by the Chinese delegation at the Arctic Circle Assembly as "win-win," cutting the time and fuel costs for the shipment of goods from east to west and envisioning a near future with the ice further reduced when thousands of ships might pass with all the ensuing savings and profits. Win-win, yes. But for whom?

What was curious about all this was that, hidden in the sessions, was the information that President Obama had suspended all future oil and gas exploration permits and licenses in the Arctic for the balance of his term. Shell had just closed its Arctic drilling experiment having wasted $9 billion in shareholder value on an ill-conceived, embarrassingly executed exploration failure. In one of the smaller breakout sessions, a fisheries research scientist mentioned that his two-year study had revealed no increase in fish stocks as a result of northern migration from the open ocean. There are problems: not enough icebreakers to open passage for the ships, no capacity to rescue or respond to accident. Beyond statements of best intent, no one seemed able to offer a convincing estimate of unsubsidized return resulting from this endeavor in the form of significant employment, health benefits, and increased educational and training opportunities for those who actually live there.

As I listened, it appeared to me that the entire assembly was caught up in an invisible gyre of conventional thinking and behavior that on the surface claimed to be progressive and constructive and sustainable, while below was in fact a recognizable maelstrom of predictable forces and financial motivations by governments and investors with no real interest in the unique capacity and ultimate conservation of the Arctic garden. No one seemed to be asking the alternative question: Other than resource extraction, what is the true value of the Arctic?