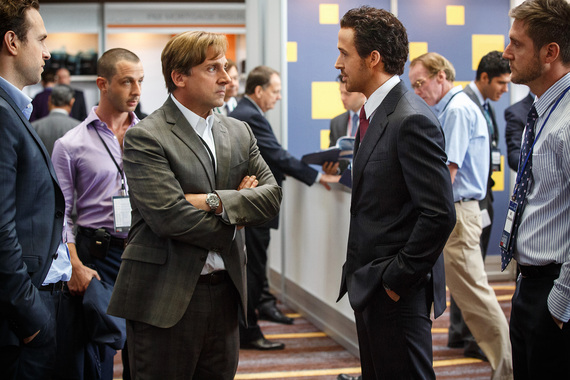 If collateralized debt obligations, mortgage-backed securities and credit-default swaps are your thing, then Adam McKay's The Big Short is for you. If they're not, the film is still for you. That is how palatable, enjoyable, even, the movie, starring a motley crew of Hollywood-heavyweights-turned-Wall-Street-monomaniacs, makes financial rhetoric that is otherwise intimidatingly esoteric. Based on Michael Lewis' 2010 book of the same name, which detailed the 2008 financial crash in all its cataclysmic, number-crunching hysteria, The Big Short stars Christian Bale, Steve Carell, Ryan Gosling and Brad Pitt who, with varying degrees of moral rectitude, foresee the burst of the then-booming mortgage bubble, a cycle of corruption and fraud I cannot even attempt to explain. McKay, though, does an admirable job at that. Even if indiscriminate fourth-wall-breaking cameos by celebrities like Margot Robbie (in a bathtub), Anthony Bourdain (in a kitchen) and Selena Gomez (at a blackjack table) are a bit jarring, they help to clarify some of the more complex financial jargon which, in the hands of a different director, might have made the film incorrigibly boring. But this is the director of Talladega Nights we're talking about!

Bale turns in the film's best performance, playing Michael Burry, the founder of Scion Capital, a real-life vigilante who, in 2005, spotted the inevitable demise of the housing market and the American economy: faulty mortgages were doled out, packaged into CDO's which were comprised of tranches, then spliced up, slapped with erroneous triple-A ratings and traded wolfishly, stretching the bubble and making everyone millions and billions of dollars until it all came crashing down, in 2008.

Dr. Burry decides to "short" the system, or bet against it; he is met with laughs by execs at Morgan Stanley and Goldman Sachs, who don't understand why Burry would bet on something to happen that's never happened before. But Burry's not your average Joe; he careens around the office barefoot, in charming ensembles of cargo shorts and worn-out t-shirts, his death-metal turned up, his emails ignored. He masterfully embodies the intellectual recluse. He even has a glass eye! And cinematographer Barry Ackroyd brings you in close, so close that you can clearly see the rivulets of sweat racing down Bale's face. Ackroyd's camerawork is high-strung throughout, going from suit lapel to tie-bar with turbulent frenzy; and it works, largely because the film's characters talk and move in much the same way, particularly Steve Carell's Mark Baum.

Speaking of the funnyman, he's the film's most pugnacious character, and also its moral nucleus. "You have no idea the kind of crap people are pulling, and everyone's walking around like they're in a damn Enya video," he screams as he's trying to hail a cab. Baum screams a lot; in board meetings, at conventions in Las Vegas. He's the good-guy, though, certainly no milquetoast who's afraid of the big, bad banks. While Gosling's Jared Vennett predicts the collapse (with a Jenga metaphor, no less) but regards it with smug indifference - it being the unemployment and displacement of millions of Americans - Baum can't shake the feeling that, if he's right, his massive profit will be at the expense of so many innocent, hard-working people. McKay asks that you keep this in mind without being pedantic or preachy. What makes the film so good, besides its crazily amphetaminic pacing, is its soluble mix of comedy, overt audience pandering, heist-level drama and, ultimately, tragedy.

Baum is the only one of these guys who gets any sort of substantive backstory, and because 99% of the movie is the stuff of billionaires, boardrooms and bribery, Carell's scenes with his wife, played by Marisa Tomei, seem a bit arbitrary and random. Other things in the movie that are arbitrary and random, with varying degrees of success: Gosling's chia-pet wig, Gomez explaining what the "hot-hand fallacy" is at a casino in Las Vegas, two references to the restaurant Nobu, and a surprise appearance by an alligator in the pool at a home in Florida. It is McKay's little comic idiosyncrasies that rescue the film from its fascinating-but-morbid subject matter.

I left the theater with my mouth agape, both transfixed and appalled, and I imagine this is exactly what McKay wanted. Although he's a comedy guy at heart, he masterfully handles a story that is, for lack of a better word, unbelievable. And yet the most unbelievable stories seem to always be the ones that happened. McKay understands this - the sheer gravity of the corruption that polluted Wall Street - and because of it, he stops short of heroizing the anomalous outsiders who spotted systemic sleaze (Baum and Burry are profiting from all this, too). Instead, the film is a passionate indictment of ethical misconduct and profound negligence. But which one is it? Were those complicit in the rancid system stupid or grossly immoral? The movie suggests it's a bit of both: Melissa Leo, in a small cameo as a duplicitous agent at Standard & Poor's, appears in what look like dark, post-cataract eyeglasses. She's been giving bad mortgages triple-A ratings to keep everyone happy; she's blind and a fraud.

It is, ultimately, The Big Short's inability to spare a single soul that makes it the lively polemic it is. The bad guys are really bad, and the good guys are either also bad or just okay. And yet, despite this cynical outlook, The Big Short gives you reason to be hopeful, if for no other reason than because the film was made , and is sure to enlighten legions of moviegoers, myself included.