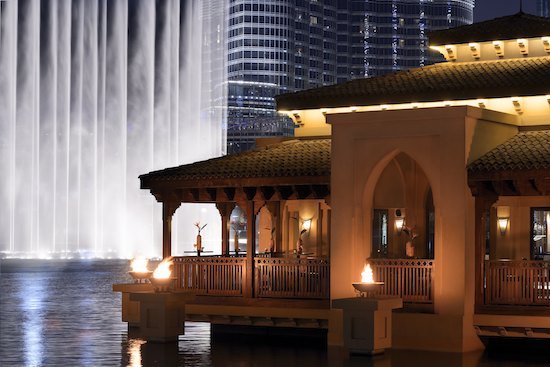 The Palace Downtown with the Dubai Fountain in the background

When American movie star Chris Pine called Dubai the "Future-land" during a press conference earlier this year, I finally found within his observation the perfect way of describing a feeling I've had for some time now. Whenever I'm in Dubai, this marvelous city of possibilities, I feel like I used to feel in N.Y.C., in my early days there. Because Dubai -- like the Manhattan of Julian Schnabel and Jean-Michel Basquiat -- is a land of visionaries and pioneers, but also a megalopolis that is achieving its stellar place on the jet setting world map at dizzying speeds. No other place does is better, bigger and faster.

And nowhere is this more apparent than in its Downtown district. If you want a five-star plus luxury hotel, that is where to book. If you want the latest designers clothing, you step into The Dubai Mall. If you want to eat at world class restaurants, savoring dishes created by Michelin star chefs, this is where you book your table. The choices are endless and the possibilities, limitless. Even when you think you've done it all in Dubai, there will be a new restaurant opening up, a trendy designer will install their flagship store here, or you'll discover that a world-class celebrity chef has moved to the city from Paris, London or New York City.

Recently, everything I love in life -- fashion, food, glamour and fun -- came together in one place, under one roof I already adore, The Dubai Mall, in this hotbed of activity and excitement. The end of October saw the second edition of the Vogue Fashion Dubai Experience taking place in the fashion capital of the Middle East and I kick myself for having missed it. But with the help of a few friends in the right places and the willingness of three master chefs to step outside their comfort zone, I managed to find a way to celebrate glamour and gourmet, in my own very special way. 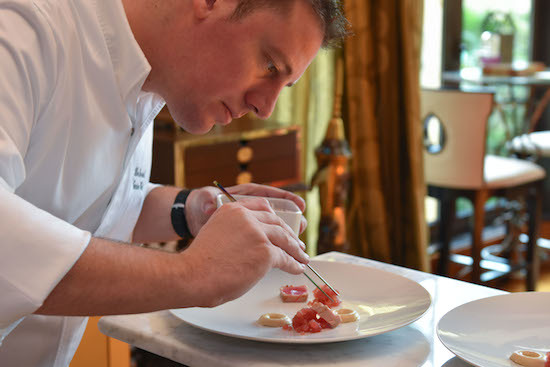 At The Palace Downtown Dubai, I found in the figure of their Executive Chef Steve Deconinck a magnificently inventive soul. Of course, the hotel itself had me at "hello", from the moment I stepped into their Arabian-inspired lobby, complete with central water fountain and the fragrance of exotic flowers in the air. And I can't wait to go back for some spa treatments and another Palace cappuccino, which came complete with 24-carat gold leaf and four scrumptious, perfectly chilled macarons. But I digress, which is easy to do when surrounded by the understated grandeur of the place. 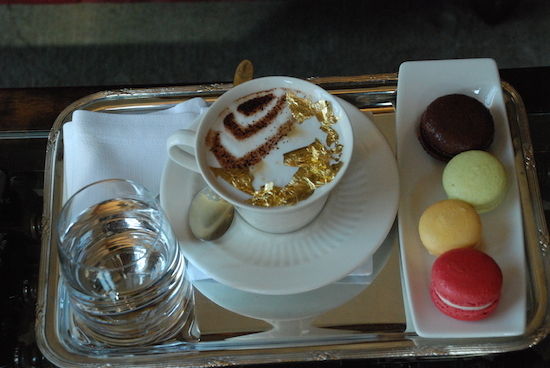 In advance of my visit, chef Steve was asked to look at images of the collections from the various designers at the Vogue event and choose an outfit that inspired him to create a culinary counterpart. He chose two different looks by Dent de Man, a design house based in East London but drawing inspiration within Ivory Coast. I was excited about this pairing because I've become a huge fan of Dent de Man and their wax print suits after seeing them up-close at Pitti Uomo in June, plus I knew the Java connection probably meant my culinary journey would be Eastern-inspired. 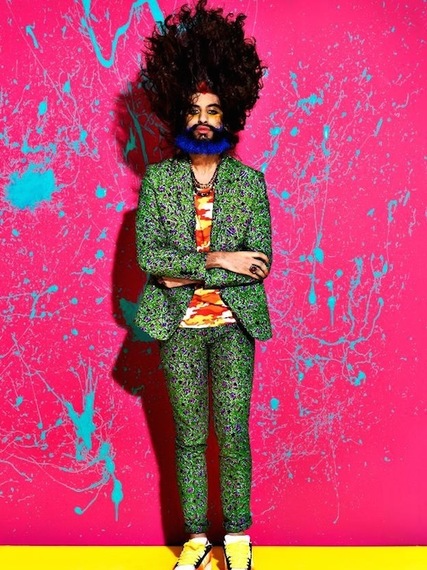 Chef Steve, born in Belgium, has been in the restaurant business since he was a child. His parents owned a restaurant for 36 years, which is where he first acquired his cooking chops and when he was 16, he decided to go to hospitality school. He described his time there, working with big chefs as, "the first touch I had with cooking, inspiration, lifestyle and fashion. All those high level chefs, they are now very popular, very famous and on TV." Once he finished with school, he started working in a "three-Michelin star restaurant in Brussels," he continued, "we were more than 20 people in the kitchen, I had to start from the bottom, cleaning vegetables... I suffered, starting from zero," after having already learned how to cook in his parents' restaurant. But it was great schooling for chef Steve, who can list many more Michelin-star restaurants, in locations that range from France, to Spain, to London on his résumé. 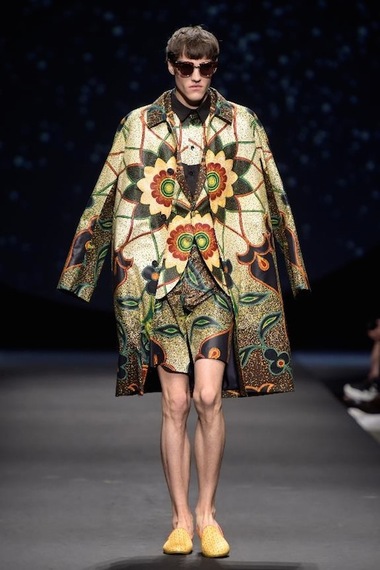 When asked what brought him to Dubai, to what he calls the "challenge" of being executive chef for a hotel, chef Steve was quick to reply, "for about six or seven months before I got the call, I was thinking of coming to Dubai. Everybody is talking about Dubai, and all the great chefs, they are here." He then offered an insight as to why the restaurant scene is so healthy and vibrant in the city, by explaining that "there is a culture of going to restaurants here; in Europe we still have that culture of eating at home but here they don't have that. So restaurants are busy every day." 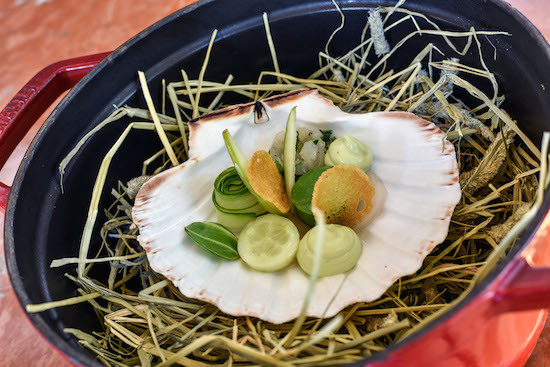 Inspired by the fashions of Dent de Man, Chef Steve created two extraordinary dishes. One a fragrant scallop ceviche marinated in lime juice and brown sugar, accompanied by a basil and lime sorbet, smoked briefly in hay and served chilled in its shell. 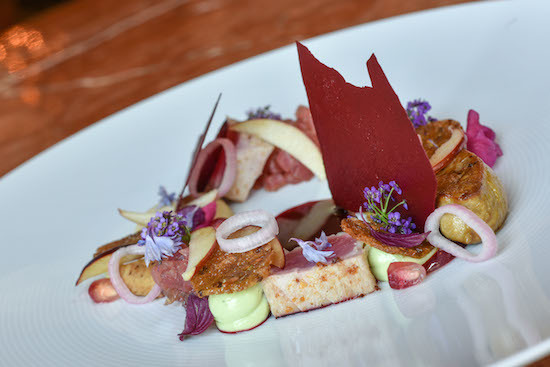 The second dish a combination of tuna tartare and slightly seared tuna, paired with a royale de foie gras and baked foie gras, drizzled with a beetroot syrup, and finished with a sprinkling of edible flowers and beetroot crisps. I loved that chef Steve uses some oversized multicolored tweezers to put the final touches on his dishes! Both creations would belong in The Palace Downtown's Thai restaurant, Thiptara, which boasts one of the best views onto the Dubai Fountain, is soon launching an alternative Saturday brunch called the "Hypnothai Brunch" and matched the Dent de Man looks both in cultural inspiration and in color. Simply amazing. 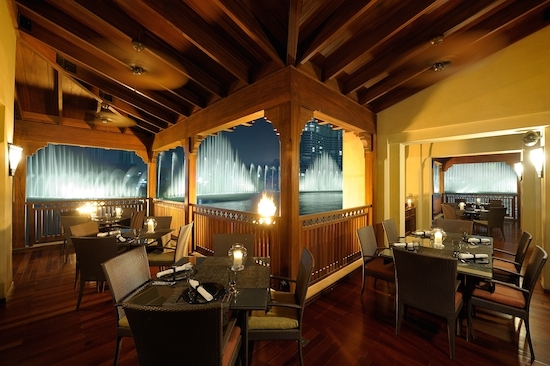 But while the eyes may want their share of a great dish, the final proof is definitely on the palate. I will start by saying that I found both creations by Chef Steve simply phenomenal. My taste buds were tickled even before I took the first bite of the scallop ceviche, which enveloped the spoon in its smokey scent and then surprised my tongue with the chilled tartness of the herby-lime sorbet. I finished the entire dish, trying elegantly to sop up every last drop of its sweet, fragrant juice with my spoon. And I don't usually even like scallops, cooked or otherwise, so immagine that! As far as the tuna and foie gras done two ways combination, I enjoyed the different textures dancing on my tongue and found the deconstruction of the ingredients, which all managed to come together into a symphony of flavors, simply divine.

And for a bit of authentic chef Steve spirit and humor, I'll leave you with a YouTube video where he's asked to describe himself in three words -- usually a favorite last question of mine to really get to the soul of a person. In this case, a deliciously talented, work-around-the-clock, super creative human being.

Stay tuned for more Dubai fashion, food and fun pairings in the days to come.

All images and video used with permission.