Yesterday the 34th Israeli government has been declared and the gushing wound that has become Israel has finally been aired and exposed inside Israeli society. Israel has many issues from the outside, but its most pressing problem is its domestic unrest and bubbling hate among its parts; given the rein of terror since the assassination of PM Rabin and the rise of the Netanyahu, this is not surprising. What it is is alarming. More than even, Israel has been rapidly molded on the hate of the other for the past two decades, and its politicians continue to bank on hate instead of co-existence. This new Israeli government would be laughable had it been so sad, and mainly, so dangerous; inside and out.

The multiplicity of groups in Israel and their aversion to each other leaves very few innocent. And they all hate each other with a vengeance. Right/left, white/black, Jewish/Muslim, religious/secular, Ashkenazi/Sephardi, immigrants/natives, police/citizens, Israeli-Jews/Israeli-Arabs, druz/Arab, periphery/urban centers, and the list goes on and on and on. Everyone is motivated by hate of the other, hate of the different. And all are maneuvered by visible fist of the Israeli government and their sponsors; a money-power connection that is an iron fist.

I grew up in a "split" household; my mother is second generation to the holocaust from Poland and my father came to Israel as a baby from Morocco. I am half Ashkenazi and half Sephardic. So many of my friends were 'mutts', but as a child and a teenager I never noticed the ground rumbling underneath me. I thought the stories my father told me from his days as a 'Mizrahi' (the term for north African Jews in Hebrew) and how he was called names for being Moroccan have been long gone. I was wrong. Very wrong.

The rift is now wider and more full of hate as ever, and is mainly surrounding the right/left divide that goes hand in hand with religion/secularism and racism/anti-racism. It started with the summer war on Gaza when numerous businesses in Israel decided to not only fire or not employ Israeli-Arabs, but refused to serve them. Continued with ongoing attack on the freedom of speech from a growing right extremist movement on the left that objected the war and racism, and from left wing elitist and highly educated 'Ahskenazis' against 'Sephardics' based on their intelligence, and reached new heights when PM Netanyahu went on YouTube on election day to call to action all Israeli-Jews to go vote because Arabs are being brought on busses by the Israeli left to vote. It now reached a whole new peak with Netanyahu presenting a narrow rightist, self-interested and racist government.

It was a hard government to build; each and every member of it blackmailed a title, a role, a budget, a promise, a car, or a secretary. Whatever it is they wanted it and everything was up for grabs. Not a single one of them cared about the time spent, the dysfunctional government they are building, the obvious inability it will have in passing anything significant or important, and certainly not one cared about the funds they are wasting on themselves taking away from a growing lower class and poor-class in Israel. They didn't care about anyone or anything that had to do with society building, or public service. The only service they cared about is the services they will get themselves, fighting over the big titles to get more and more and more. For themselves. And we all sat and watched. Some blind to the abuse, yet others appalled and with growing anger.

It is crystal clear that this right wing extremist government coalition will not only ignore the needs of the weak population in Israel, but will also continue to galvanize the same populations to forget about their miserable state and continue to vote on hate. This new "coalition" has already approved expanding the number of ministers, costing Israelis citizens millions more, just to drive fancier cars, have secretaries and get a title; 'Minister'.

In his speech yesterday, after barely making it and trading and dealing to the very last minute, Netanyahu said he will be the Prime Minister of all the citizens of Israel and will continue to work towards peace. And it was exhilarating to see how one by one the Arab members of Knesset objected loudly and left the floor. It was, with all the sadness and shame I feel about Israel, a moment of pure happiness; a moment where Benjamin Netanyahu had to stand there unable to defend his legacy. But his legacy is not only his. Every single member of this new coalition should be tried for treason. It is moments like this that I struggle with my objection to the death penalty. You can say it is extreme, but I am sick and tired of the worldly trend of governments shamelessly using scare tactics and blatant self-interest to lie and betray their people just so they can get fat. 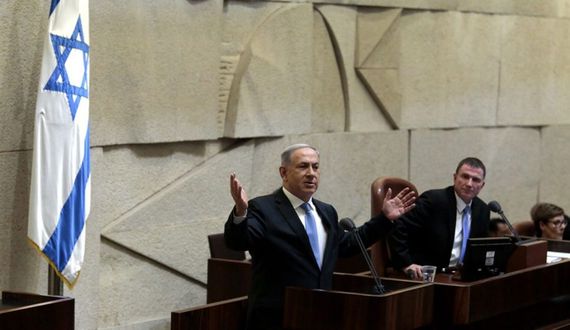 I tried hard to stay 'human', to be full of love and understanding. To work from a place of peace and progress, but frankly I am no longer interested, nor do I think any of those places will help. When a respectable journalist in Israel makes the comment that she is sure the first lady would not have and is not happy with certain appointments in the government, which is an utterly absurd thing to even say, and when another states that it is not respectable for the Arab party to cut Netanyahu's speech off, when the person who disrespects us all for over a decade is Netanyahu himself, and everyone thinks those are normal remarks, you just know things have lost all control and abandoned all logic.

I think Israel needs a revolution. I think Israelis need to freak out, blow a gasket, wig out, and stop being blinded by the sheer idiocy of hate and power. It is time to start acting like the Greeks and Italians and be brave. I think it is time to burn.