You may have heard this awful projection: According to the the World Health Organization (WHO), by 2030, the amount of disability and life lost as a result of depression will be greater than that resulting from any other condition, including accidents, war, suicide, cancer, and stroke.

But we don't need to wait 16 years. The depression epidemic is already at hand. Just last week, another report, prepared for the United Nations (UN) and released by the WHO, concluded that "depression is the predominant cause of illness and disability for both boys and girls aged 10 to 19 years." Across the world in 2012, the report continued, unipolar depressive disorders took away a collective 14 million years of healthy life from youth: 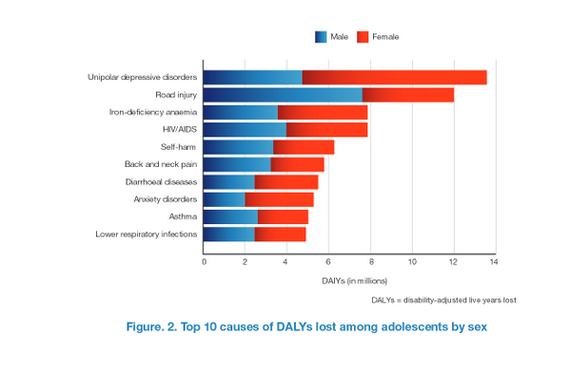 Amazingly, suicide is the third most common cause of death in adolescents, behind traffic accidents and deaths from HIV/AIDS.

It's an international problem, for sure, but one that hits our country particularly hard; 35 million American adults will struggle with depression at some point in their life. Depression is one of the main drivers of suicide, which takes the lives of 30,000 Americans yearly. Among those hospitalized for depression, perhaps up to 15 percent will go on to die of suicide.

I was disappointed that the WHO report did not attract any coverage from major news organizations like CNN, NBC, or The New York Times. That same week, there was intense daily coverage of the MERS virus, which has killed zero Americans and 200 people worldwide. The epidemic that is already upon us was ignored.

Public safety authorities are committed to preventing travelers' deaths from airline crashes. Plane crashes have become rare. The aspirational goal is zero plane crashes and zero deaths. When a plane crashes, there is an inquiry, an intense dialogue about "what went wrong." Over the past few weeks, there has been wall-to-wall coverage discussing what might have gone wrong on one missing flight. Where is the inquiry, the dialogue, the coverage, about what allows suicide to kill 800,000 people a year?

The media failed us last week. But we must all try to slow the depression epidemic. I believe there are no valid excuses, only rationalizations, for not taking action.

One rationalization is fatalism: I need not act because there's nothing I can do. False. Unlike with the MERS virus or airline safety, everyone can do something about the depression epidemic, including joining an advocacy organization, writing your congressperson, donating money, being kind to a depressed person, and, if you've been depressed or suicidal, sharing your experience to reduce the stigma. At a minimum, learn about the problem.

Another rationalization is wishful thinking: I need not act because someone is going to invent a magic pill to make this problem go away. Unlikely. Antidepressants have been around since the 1950s. The number of compounds have multiplied, but there has been no corresponding increase in their efficacy, nor is this likely to change. Pharmaceutical companies have pulled back on drug development.

The ugliest rationalization of all is a kind of indifference toward depressed people that is driven by prejudice: I need not act because they should pull themselves up by their bootstraps. According to this line of reasoning, anyone who cannot pull themselves out of the morass of depression and suicidal thoughts is morally suspect and presumably not worth saving. As someone who struggled with severe depression and suicidal thoughts for years, I find that this judgment cuts close to the bone. In truth, I am alive today because of the concern and caring of other people, not because of my high moral purity or titanic strength.

Let's reject rationalizations and excuses for not acting to slow the depression epidemic. Let's ask the media to shine a light on the most pressing public health issue of our time.

Depressed people are not expendable.