Welcome to your worst nightmare. And it's true.

OK, so it may only be true in cinematic terms but when a film is made the way Majid Al Ansari's Zinzana (Rattle the Cage) is, that poetic license feels eerily similar to a kind of alternate, yet terrifying reality. Oh, and before you go and think otherwise, that's a good thing. A great thing actually.

The basic premise of Zinzana, the first feature film by Emirati filmmaker Al Ansari, revolves around a psychopath on a mission, Dabaan, played by a wonderfully deranged Ali Suliman. As he slams into the life of Talal, a recently divorced, recovering alcoholic played to perfection by the beloved Saleh Bakri, the barren, waterless jail cell Talal occupies becomes his calvary. Because what Dabaan has in store for everyone around -- from the cocky Sheriff Usman (Abdalla Bu Abed), to the asthmatic, plump Deputy Aida (Yasa), from Talal's beautiful ex-wife Wafa (played by Saudi darling Ahd), to the angry Bu Hamad (favorite Emirati actor Ali Al Jabri) and finally the prisoner himself, makes being confined behind bars seem like paradise in comparison. 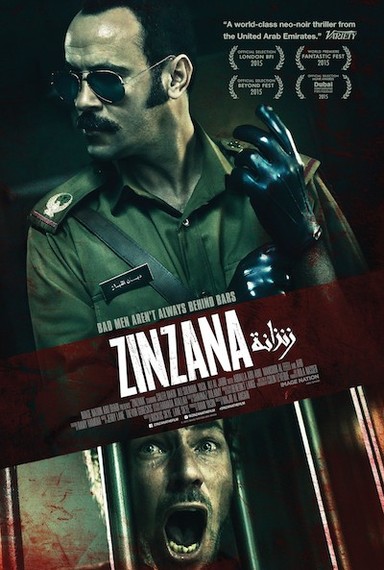 Zinzana is quirky, violent, beautifully shot, masterfully written and divinely cast. Having this much talent cramped into a single, small prison setting makes the film feel even more claustrophobic for the audience and again, that's a good thing. During a press conference for the movie at this year's Dubai International Film Festival, Majid Al Ansari confessed his love for "genre films, particularly Asian cinema," which is obvious in the absurdly violent and over-the-top gory bits of the movie. This is cinema as it's never been done in the Arab world, and with Zinzana Al Ansari has raised the bar, he's created a brand new standard for the industry in the Gulf, one that all future filmmakers will not only need to live up, but try to surpass.

Zinzana producer Rami Yasin helped explain Al Ansari's genius when he pointed to the way the film was shot, "one of the most interesting choices Majid made was he wanted to make the camera a character in the film, the only free character in the film." It is exactly the audacity of the camera -- flirting with the madman, zooming in on the violence, twirling provocatively for a dance with Dabaan featuring an old Italian song and then hiding in the darkness of a bathroom which holds a horrible secret -- that proved most effective and delivered the winning pitch for me. That, coupled with the incredible performances and the courage of the production.

Zinzana is an Image Nation Abu Dhabi project and Yasin described them best when he called them "a studio that works in the independent spirit, which allows the filmmakers to work together with the actors and develop their stories really really well." It's no secret I'm a fan of the work they've been doing, particularly in the last year or so, with projects that span from Ali F. Mostafa's From A to B, to the documentary He Named Me Malala.

The story of how the script for Zinzana (by Lane and Ruckus Skye) was discovered is also groundbreaking. Al Ansari explained, "I found the script on The Black List. I signed up and kept reading script after script, at the time I was doing it for Image Nation, and I fell upon Rattle the Cage and thought it would be perfect." The Black List has opened up this whole new world of endless possibilities with global stories now being at everyone's doorstep, just waiting to be discovered, read and developed.

Ultimately Zinzana is everything I dream about for Arab cinema. A narrative that moves away from the Arab Spring, the social issues and the looming dangers on the other side of border and towards creativity and a universal appeal.

In the words of Al Ansari himself, "Inshallah, it's a new movement; my favorite cinema is Asian cinema but I want to change that to Arab cinema. I would love to see Emirati films be side by side with great Asian cinema -- It's not only Emirati, it's bigger than that."