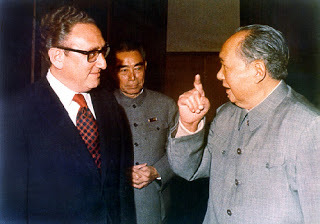 There have been reports about the president elect meeting lots of pretenders to the cabinet and also prominent democrats such as Mayor De Blasio and Chuck Schumer. There is some common ground between Schumer and Trump. Both Trump and Schumer opposed the Iran nuclear treaty and we would suppose that Schumer would agree with Trump on the need for major spending on infrastructure as a way of putting people to work--something that Republicans in congress thwarted and may very well attempt to restrain again. Tea Party conservatives in particular don't approve of spending. An area of common interest between Trump and our current lame duck president is the fact that America's allies have to begin to pick up the tab, but an area in which the former president and his successor would not be in agreement would be the support of the rebel cause in Syria. Trump also met with Henry Kissinger and without putting words in the mouth of the former secretary of state one could imagine him arguing that an alliance with the Russians and Syrians against ISIS might make sense--something about which Trump may agree. But what other price would have to be paid? Where will Trump draw the line regarding Russian intrusions into the now balkanized states of the former U.S.S.R.-such as what happened in the Crimea? Of all these meetings the one with Kissinger may be the most telling. It's often been commented that Trump doesn't seem to have an ideology (in fact it's one of the criticisms of him by Republicans who don't think he's a real conservative). But what seems to be Trump's modus operandi and something which served him well in winning the primaries and finally the election is his ability to sniff blood. He's the epitome of Spencerian Social Darwinist. Whatever his views on evolution, he plainly believes in the survival of the fittest is what governs interactions in society. Such a view is naturally amoral since its is based on the notion of predator and prey, with the stronger surviving and perpetuating the species. Trump's much criticized reticence about committing himself to the results of the election actually defines his stance in most affairs. He will meet with anyone (he has said he would talk to Kim Jong-un--"Trump says he would host Kim Jong Un in U.S," CNN, 6/15/16). All the pieces are on the table in the Trump universe. Trump got his stripes in the cut throat world of Manhattan real estate. Caveat Emptor!