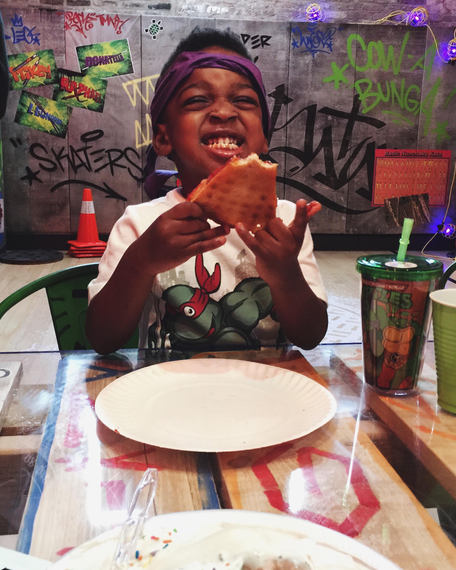 The ultimate both young and young at heart kid fantasy lies hidden in a loft downtown in Manhattan. It's referred to as "The Lair" and it is meticulously and artfully staged by Amy Gavin, a set designer extraordinaire, with an outstanding crew. They were able to transform a raw space into a fantasy trip of the generations-old comic strip about green-skinned crime fighters with namesakes of Renaissance masters. Yes, you guessed it - it's the Teenage Mutant Ninja Turtles.

I was invited to preview The Lair before the space was opened up as a livable mise-en-scène where devoted Ninja Turtles fans, in advance of the new TMNT film out this past week, had signed up to spend the night.

After walking down a long staircase all my preconceived notions of a traditional Tribeca residence faded away. I was met with graffiti-covered walls of the former living room area that had been converted into the illusion of a subterranean dwelling. Gavin led the unique creative direction in making an ordinary apartment feel authentically like "the sweet sewer" where the pop fictional characters would often spend time.

The creative team referred to storyboards from the upcoming film to help shape the most believable interpretation of what it would feel like to enter the animation. She worked with graffiti artists Blake KEO Lethem & Johnee Schleman to create tags for the walls and additional designers and carpenters to transform the white-walls of the duplex into a cavernous space boasting over forty vintage boom boxes, an original 1989 Ninja Turtles arcade game, an indoor basketball court - and of course limitless boxes of pizza, as anyone familiar with the Ninja Turtles would expect. 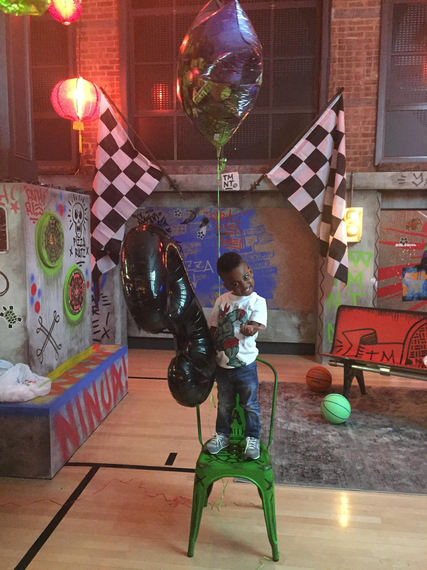 As I continued touring the space I had the pleasure of watching young guests Dash and Theo joyfully play in The Lair. I asked them what they thought and as expected they replied, "This is awesome!"

I spotted the children's father, Ross Martin, Executive VP of Marketing for Viacom, and asked him about the incentive behind The Lair. He explained: "Viacom Lab is presenting real life reality sets from some of their most popular kid's shows from Nickelodeon and putting them on Airbnb for these experiential journeys to another world. One guy threw his 3 year- old nephew a surprise birthday party. This is why we do it!" It's all very special to get a chance to live in a world that is inside your television and on a movie screen. When we showed it to the creators of TMNT, they laughed and couldn't believe it, it's super great cause it doesn't cost anything but a $10.00 deposit, which visitors get back at the end of their visit." 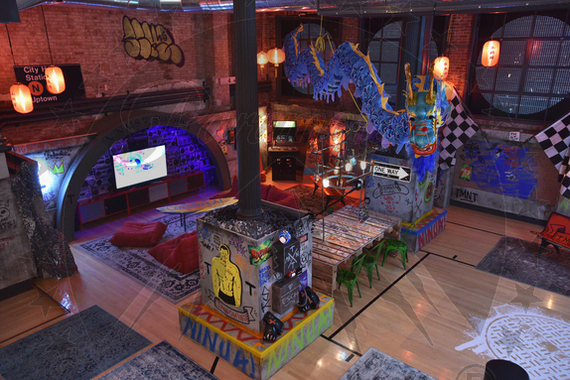 I tracked down the uncle of the 3 year old boy, Jerome Shaw, who snatched up the space for his nephew William's birthday party. "The kids were like totally amazed. They see all this stuff on T.V. and there it is in real life. My nephew ran up to the drums immediately and started doing his thing! We were all playing basketball with them. It was pretty cool! We had pizza and birthday cake and all the kids were blown away! They'll remember it for a long time." Ribbit!