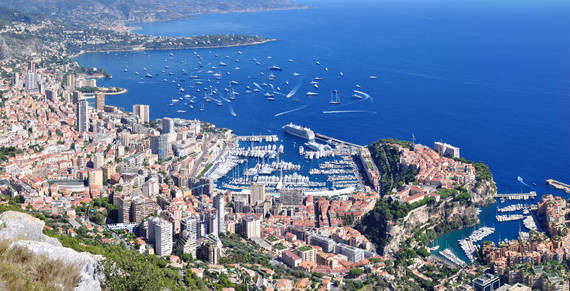 In Monte Carlo recently, we were window-shopping. Not only when we peeked at the displays in the windows of Cartier and Prada, Hermes and Dolce & Gabbana... but everywhere we went, all the time. We'd never witnessed anything like this up close.

"Monaco is the most beautiful place on earth," remarked a friend with confidence when I mentioned we planned to visit the principality.

It's all of two square kilometers. In that tiny land area is found not only more people per city block than anyplace else on earth (about 33,000 altogether), but also more money. This speck of a country on the side of a cliff overlooking the Mediterranean Sea is awash in the stuff.

The whole place is a playground for the rich and jet-setting, who come here, if they're able, not only to visit, but also to reside. For, as residents, they pay no taxes. Monaco is one of the world's few remaining true tax havens.

The effect of all this tax-free money in such a contained area is both as you might predict (the streets are clean, the building facades are fresh, and the parks are manicured) and also, for me, very unexpected. The people are friendly in a way I've never experienced before.

Stand on the corner waiting for the light to turn in your favor so you can cross the street, and drivers stop and wave you across with a smile. Stand anywhere too long looking confused, and strangers pause to ask if they can be of assistance. Sit down in a restaurant for lunch, and the woman at the next table strikes up a conversation...

At one café where we had lunch, the nice Irish-British-French-Monagesque lady across from us asked where we came from, then, when we explained we'd lived in Ireland, then Paris, and now Panama City, she turned the conversation to money. I guess it's generally on everyone's mind here.

"What is the financial situation in Panama?" our new friend wondered. "Have they experienced crisis like so many countries have these past several years? We haven't seen it here, really, because banks here don't lend the way U.S. and UK banks lend. Here, the most you can get is 70% or 80% and that only after a serious financial review. What went on in the United States and the UK could lead to no good end, and everyone should have known that all along."

People we met offered not only market commentary. Passers-by offered our son Jack sweets, offered to help me carry my parcels, offered to give my husband directions...

Who could be grumpy living this life? Certainly no one we encountered. 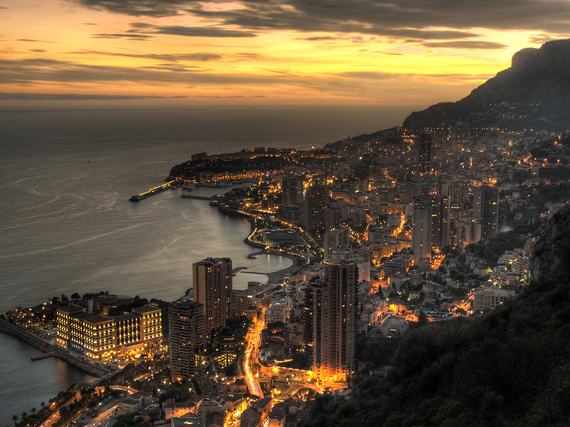 My friend's estimation of the place was not exaggerated. We drove the coast road from Monaco to Cannes, and it's hard to imagine anywhere more picture-postcard beautiful. The region challenges the travel writer, who is hard put to come up with a description to do it justice.

Monaco is not only beautiful but also an engineering marvel. Can't waste a square meter of space in a country this size. To make the city-builders' job tougher, this tiny ville sits atop the side of a rock cliff. Through the rocks, over hundreds of years, have been cut tunnels and walkways, bridges and underpasses. The city's infrastructure is layered. As the crow flies, you could cross the entire nation in a matter of minutes. In practice, getting from place to place requires ups and downs, overs and unders, and a keen sense of direction. The winding roads and passageways rarely lead where you expect them to lead.

It's no wonder we saw not a single person, young or old, who was overweight. The Monagesque eat as well as the French, but then they hike these hills and cliffsides day and night.

In fact, Monaco shares many similarities with the country that surrounds it. It's the best of France with an Italian twist. We could never afford to live this five-start lifestyle full-time, but we appreciated that the Monagesque didn't seem at all bothered by our taking it for a test drive.