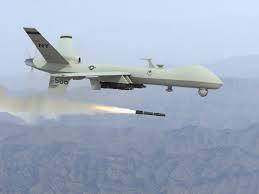 During my stay in USA, several of my American friends brought up the subject of drone attacks. Cornell is a very liberal school and consequently whenever the topic was broached; it was to condemn the drone attacks and equate these to US hegemony as well as insensitivity.

To their surprise, I would start debating them and draw their attention to the other side of the picture. Many of them would actually be surprised by my completely unexpected point of view. Some of them would debate it and out of those a few would eventually admit that at least there was more to drones than mere violation of Pakistani sovereignty, imposition of US hegemony and loss of innocent lives.

However, one question has always been thrown at me: How come you claim to be a liberal and yet support drones which are usually endorsed by rightwing circles in USA and opposed vehemently by liberals. And yes some have expressed their "disappointment" in me with respect to my views about drone attacks.

Back in Pakistan, I was even told by one friend that I was very insensitive to the plight of those who were killed. "If your own family was killed only then you would understand". Another pointed out that I should be aware that terrorists should be tried at court rather than killed through remote control mechanism. The word "due process" has several times been used. I was also told about international law and how drones are a blatant violation. I was also told that drones actually reinforce radicalization. Some of my Pakistani friends have also stressed a lot on the violation of sovereignty

I admit that all the above criticism is valid to some extent. Yes, drones do result in loss of innocent lives. Yes on a purely theoretical level sovereignty is violated. Yes, so called due process is not allowed to the killed militants. However, my case for drones is based on a nuanced understanding of the situation, the kind of enemy we are trying to fight and above all the relative effectiveness compared to other options.

So what kind of an enemy, are we fighting here? Let me be clear here that we are not fighting some aggrieved nationalists who have opted for armed rebellion against the elite and its instrument of oppression: the state. We are dealing with ideologically charged foot soldiers but extremely shrewd handlers and leaders. They are using ideologically charged and brainwashed kids and teenagers as fodder for obtaining power in the name of religion.

I find it ironical that drone attacks which are condemned so much are actually aimed at killing militants in a targeted manner compared to suicide blasts which are conducted by the same militants to kill innocent people indiscriminately. More than 50,000 people in Pakistan have died due to religious terrorism and yet our media and urban middleclass are more worried about drones which aim at perpetrators of those horrendous crimes.

I am not denying collateral damage here. I would like to fully admit that these attacks do result in the loss of innocent lives as well. To deny an obvious reality would be intellectual dishonesty and whether we support or oppose the drone attacks, we need to ensure our credibility remains intact. Yes, there is loss of life and it is tragic. But the situation is akin to a kidnapper hostage scenario where you have to take an action even at the risk of hurting some of the hostages to prevent larger loss of life and to also avoid being blackmailed by the kidnappers. Yes in my opinion, drone attacks should be launched on better intelligence.

Many of us have this rather strange understanding that left alone militants will just fade away. No you have to tackle this menace and through force. Even if you have to negotiate then you should negotiate from a position of strength for which some use of force is essential.

So what are your options?

As I said earlier we have to factor in complications and compare other options. Things have to be viewed in much broader perspective in a complicated situation like war in Afghanistan. If there were no drone attacks then the alternative would have been a full-fledged ground invasion which would have actually entailed much greater loss of innocent lives. In fact the present ongoing military offensive against militants by Pakistani military has led to far more collateral damage. The drones allow the USA government ( and by extension the Pakistan Government) to target high value targets without much collateral damage. In

I have heard a lot of hue and cry over how drones are radicalizing youngsters and therefore are counterproductive. In my opinion this matter is also not as simple as it is being projected. First of all, drone attacks are a recent phenomenon. Taliban had been there much before the first drone was fired. Secondly, you have to weigh whether allowing militants to flourish ( by taking no action) creates more radicalization or collateral damage from drones. Do we really think that all the suicide blasts including those at Shiite processions and mosques, Sufi shrines, and crowded markets are the result of drones? What is more dangerous here? Leaving these alone or trying to take these militants down. Yes I admit again about the collateral damage and I do emphasize that drones should be based on better intelligence. However, the approach that we should only adopt a "soft approach" to de-radicalize the youth is fraught with difficulties.

I have heard a number of times that bringing development and education in those areas would cure extremism. Assuming that there is some linkage between these variables and extremism, we would still need to weed out the already entrenched militants to give ourselves ANY realistic chance for development process to even initiate. Militants have to be eliminated and there is no question about that. You cannot get a foothold into the area without at least first weakening them enough and drones are one efficient method of doing that. How can you even start the process of de-radicalization without first having some sort of foothold in that area? Even the soft approach needs a military action to even start. For all those soft approach advocates, let me remind them as to what is happening to Polio vaccine workers.

How do you even start any method of de-radicalization without weeding out the entrenched militants?

The phrase "due process" has also been thrown so many times. Now due process is a very appealing phrase but it is applicable to those militants which are already under captivity. In war, when fighting an enemy you fight and once enemy soldiers are captured only then you can try them for war crimes. And during such trials you make sure that due process is adhered to.

An alternate argument would be to capture the militants rather than killing them through drones. But how exactly do you even capture such militants? Even to capture them you would again need a combination of intelligence and military strikes particularly when they are hiding in lawless areas. At times example of terrorists like Khaled Sheikh Mohammed is given as a better way of dealing with militants. He was captured and now facing trial. Likewise Aimal Kansi was captured and properly convicted. However, they were not captured from lawless terrain of tribal areas but from urban centers of Pakistan. Not every militant is going to give that kind of opportunity.

Do you really think legal way is the right way? Do you really think that it is even possible to actually capture so many militants and that too without some sort of military action? Are we being really realistic when we talk about legal trials or are we living in an alternative universe?

In my opinion, the root cause of all the hue and cry about drones is less to do with their legal status or even collateral damage. It is most probably underpinned by feeling of national humiliation. We feel that our sovereignty is violated when a much loathed foreign power like USA is attacking areas falling under our political boundaries. The fact that it is attacking THOSE militants who have targeted our own population repeatedly perhaps does not make much difference to us.

Is the sovereignty really violated? The answer is a tricky one because in purely theoretical terms perhaps it is. But realistically it is not violated because the areas where drones are aimed do not have the effective writ of the Pakistani state. In real terms sovereignty is not there in the first place because if it was there those areas would not have become open sanctuaries for the militants. Sovereignty is underpinned by state's monopoly over physical violence and virtual absence of state in a state syndrome. And those areas depict failure when measured against these yardsticks.

Over the years the Pakistani establishment and a series of governments have literally watched helplessly as militants use those safe sanctuaries to promote terrorism in the mainland. If anything, the actual violation of sovereignty is being carried out by the militants rather than the drones which are aimed at eliminating them! Realistically speaking drones are helping the Pakistani state to establish sovereignty. Of course due to the widespread anti-American sentiments, which are continuously whipped up by the mainstream media, it is impossible for a large number of urban middle class to understand it. Over the years, the urban population has developed a knee jerk reaction where anything connected with the US always ends up provoking hyper emotions which in turn makes it impossible to have rational deliberation.

And by the way do we really think that these attacks are taking place WITHOUT any approval of our government and army? Let me remind all of you that before OBL raid these predator drones were being flown from Shamsi base in Baluchistan. Obviously drones strikes launched from there had to be approved by the Pakistani government as well as the armed forces. Even now these drones are not shot when they enter the Pakistani airspace. How come sovereignty is violated when drones are being flown with some sort of approval?

Our national tragedy is that we have misplaced priorities. We hate drones and mourn loss of lives due to collateral damage while displaying a strange silence when thousands are killed by the same monsters whom drones are targeting. If you think that US should not be firing them, then come up with your weapons. It is after all your war as well.