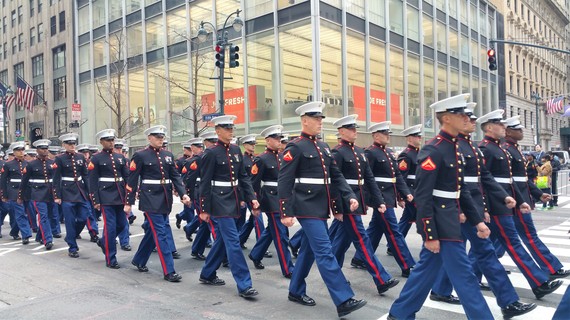 If you were like many Americans on November 12 of this year, you did take time to honor those who have fought - and still fight for - our country. Perhaps you were there personally to watch the parades that day which took place in the largest and smallest cities.

It is more probable that you caught a snippet of the parade on the evening news. What is even more likely is that you were at the mall to take advantage of "Veteran's Day Bargains." Or, the last and saddest possibility, the day slipped past without your noticing it.

I can tell you, Veteran's Day is no discount bargain for those who have served. And, being noticed is what most will starve for over the next 364 days.

Look over here... to the homeless shelters.

They report a disturbing trend: homeless vets are increasingly younger, female, and heads of households.

Look over here... at the unemployment line.

According to the Bureau of Labor Statistics, there were 573,000 unemployed veterans in 2015. Of this number, 59 percent were ages 45 and older and 8 percent were female.

Through the cold lens of statistics, veteran employment rates are not significantly different from those of the general population and therefore not considered a crisis. You might feel differently if you are one of those 573,000 vets, however.

Look over here... at the mortality table.

If it weren't for charities...

We can thank a large and distinct band of loyalists and advocates for stepping up and making sure that our warriors get the help they need, and they are doing this by way of charities. These organizations come in every stripe and color, according to a CNBC Report on the "Top 10 Charities That Support Veterans."

Some were formed by military wives, some focus on particular branches of the service, and one (Puppies Behind Bars) even specializes in training prison inmates to raise service dogs for wounded war veterans.

Among the better known organizations, such as the VFW and DAV (Disabled American Veterans), is a relative newcomer - Wounded Warriors which was started in 2003 in Roanoke, VA, by a group of veterans and their friends who decided to take action to help injured service men and women.

Now, here's the part I like. Everything that has been done in the course of launching a non-profit where I work to raise donations to buy - and then abolish - unpaid and unpayable medical bills will add a much-needed element to the work being done by others. RIP doesn't intend to pay a vet's medical bills - it intends to abolish them.

In July, 2014, "RIP Medical Debt" was launched for the purpose of taking the weight of unpaid medical debt off the backs of our fellow citizens. Certainly a worthwhile cause, considering over 50 percent of all personal bankruptcies in the U.S. are medical debt related and medical debt is an unwelcome burden for too many families.

It is now RIP's intention to include veteran debt in our campaign. It was a development that, even I as a Navy veteran, had not considered. After all, our government is supposed to be responsible for those who serve and have served, right? Not quite, not well, and sometimes not at all.

The statistics are shocking: over 500,000 homeless vets seek shelter each night; over 50 percent of returning vets suffer from PTSD; many find that their long-term health care needs outlast their Veterans' Affairs health care, and...in 2010, some 1.3 million uninsured veterans had out-of-pocket medical expenses exceed their disposable income!

With factors like this, it is no wonder that tens of thousands of military veterans are plagued with unpaid medical debt and are hounded by bill collectors.

Look over here... at the difference you can make!

It is a truism that returning vets are not prepared for the road ahead and struggle with issues such as personal finances, low paying jobs, or unemployment - which averages 30 percent for those aged 18-24.

Much to our shame as a country, a large amount of their burden comes in the form of medical debt, and that's where you can help. RIP is seeking donations from private parties and corporations to buy veteran's medical debt and pay it off - not strings attached."

Visit our website to learn more and to learn how to make that sorely-needed difference. If you determine that this kind of program and campaign can put a smile on your face, you can be sure that your donations will put a smile on the faces of our vets.

We cannot guarantee that this will put a smile on the face of the bill collector.

Politics Department of Veterans Affairs Beyond the Battlefield Veterans Homelessness