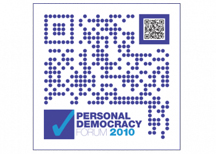 The Personal Democracy Forum is back in New York City for its two-day conference. The home of my original "new media epiphany," my third year attending was as thought-provoking as the first. A person handing out buttons that said "My Brain Scares Politicians," supplied by VoteIQ.com, greeted me at the door of the CUNY facility on Fifth Avenue.

Andrew Rasiej, founder and executive producer and Micah L. Sifry, editor and curator, led the first day of conversations and panels through the high points and rough spots -- with equal amounts or humor and taste. Rasiej, the epitome of good manners, did his best to smooth over the tech issues that beleaguered the Skype talks. For the one featuring Newt Gingrich, he gently admonished the largely progressive crowd, reminding them that PdF was an event that reached out to all constituencies.

Gingrich's segment had been part of a series of short talks on the topic, "Can The Internet Fix Politics." The other eleven speakers included Eli Pariser, executive director of MoveOn.org, Anil Dash, Jane Hamsher, and Scott Heiferman, CEO of Meetup. In one of the most retweeted comments of the morning session, Heiferman proposed, "Use the Internet to get off the Internet!" His suggestion to deal directly with people was applauded, despite the furious Blackberry scrolling in the midst of the proceedings.

Daniel Ellsberg, of Pentagon Papers fame, and Julian Assange, founder of WikiLeaks, compared notes on "Whistleblowing, Then and Now." I attended two press conferences. At the first, The Sunlight Foundation rolled out TransparencyData.com, which lets "anyone keep track of campaign donations, lobbying, and contracts at the federal and state level." The foundation has consistently worked to facilitate how the public receives information about the government through sites like ReadTheBill.org and FedSpending.org. New Media Ventures gave a thirty-minute talk on the launch of their "National Network of Progressive Angel Investors," which will focus on creating progressive political change.

The structure of the afternoon presented attendees with the dilemma of choosing only one out of eight potential sessions. Some people could be seen leap-frogging around, but as I was live blogging via Twitter, I followed the panels from start to finish. "Truth, Factchecking, and Online Media" was a robust dialogue that included speaker presentations. Jay Rosen began his with a reflection upon the legacy of Sen. Joseph McCarthy.

An integral part of a PdF get together is the exchange of innovative ideas with the people who are driving them. I had several engaging conversations.

Simon Dermer, the managing director of Essential Accessibility, told me about how his company was providing "software-based service that makes online environments fully accessible to individuals with physical disabilities." Susan Dzieduszycka-Suinat, the president and CEO of Overseas Vote Foundation, was in from Munich. Born in the U.S., she has created tools and services that help overseas and military voters participate in federal elections.

There were innumerable nuggets of insight and sound bites throughout the day. Below are some of my favorites:

Hashtags are the bumper stickers of the 21st Century.

More data was created in 2009 than since the beginning of time.

Clay Johnson: "There's more to an online strategy than an online campaign." "Let's solve problems with technology and stop counting our list."

Deanna Zandt: "Tools are trees in the forest."

Jane Hamsher: "We are pouring concrete into our problems."

Scott Heiferman: "A movement is when people self-identify." "Have your followers connect with each other and watch leaders emerge."

John Perry Barlow: "The Internet is the greatest thing since the advent of fire."

Looking forward to Day 2. The theme is "Rethinking..." Follow the "real-time" conversation on Twitter stream with #pdf10. I'll be on the ground @mgyerman.