The journalism industry is in turmoil. The digital revolution has hit content providers of all kinds, changing their business models and in some cases altering the nature of the underlying content itself. Music has seen this most starkly. But print content, most particularly newspapers, have also faced significant disruption. Digitization and the communications revolution have placed in the consumer/user the tools to access the content they want, when they want it, at little or no cost.

But there needs to be something to access: content needs to be created and paid for at some level.

We are in a period of enormous experimentation in the quest for revenue models. In the past music companies and newspapers aggregated content to appeal to a broader audience. Consumers would pay for that aggregation usually just to have access to a small portion of it. The CD album bundled a number of pieces from an artist. Yes, many enjoyed the full album, but more often bought the album for one or two favorite tunes. iTunes disaggregated the album as a revenue model. Today, the consumer may still pay close to the same amount per song as it cost on the CD, but he/she does not have to purchase the aggregated product, and can select the artist and tunes to pay for.

Similarly in the newspaper, there are many sections that a consumer pays for: local, national and international news, weather, sports, arts, business, health, life style features, obituaries, marriage announcements and the like. Furthermore, the functions of gathering the news, sourcing it, contextualizing it, suggesting what to think about it, and distributing it are all performed by the same entity.

With its near monopoly distribution channel for delivering news and information to the home, newspapers had their heyday into the 1990s. Yes, radio and then television posed some competition. But ironically, the evening news on television spelled the demise of the evening newspaper, resulting in winnowing the field to a monopoly newspaper entity in most cities.

With a monopoly distribution system, the economics of bundling make sense. The consumer will want access to some of the content, and will pay for more in order to get that access. The bundler gets more per customer and will have lower costs delivering a single product that has wider appeal, than if it had to customize to each customer's liking. The cable television business is a modern example of this.

But as new digital tools and enterprises emerge, they disrupt the monopoly aggregator model. One can now purchase the song, not the album. As video becomes more common on the Web, people will move to view and in many instances purchase individual shows "over the top," not the cable channel or television network. Former FCC Chairman Kevin Martin waged a battle against the cable industry seeking to change their business model to a la carte, allowing the subscriber to choose and pay for only those channels he or she actually wanted. He did not succeed as a regulator, but the digital revolution may disaggregate even the cable channel if the unit of consumption is the show, or series, and becomes available over the Net.

As it is happening in other content industries, it is apparent that the journalism business is unbundling. The functions that a newspaper performed alone can now be undertaken by new, nimble entrants, by repurposed other players, or by the public itself.

Let's take a typical life cycle of a news story. (1) Someone digs up the facts, and (2) composes a story. There are (3) sources for the story, the (4) facts are verified and (5) authenticated. The story, if well written, (6) contextualizes the facts, and either inherently in the story, or in a separate editorial, the entity (7) analyzes the consequences. It also either makes a bundled news provider through (8) filtering or curating processes, and then is (9) distributed to the customer.

These functions have been performed by single news organizations, newspapers, and television stations most notably. But today there are many different entities that can pick off one element or another and contribute to the news value of the story. So, there are people and entities, such as environmental organizations, that dig up the facts but do not develop the story. There are new entities such as ProPublica or the Center for Investigative Journalism that are developing the story, but not distributing it, sending it instead to other established distributors like newspapers and television stations. There are bloggers who verify and authenticate without being in any other part of the story - for example, the people who revealed the phoniness of the National Guard memo about George W. Bush that Dan Rather reported on CBS's 60 Minutes. And there are now aggregators or curators on the Internet, e.g., Google News or Huffington Post, who highlight and link to news stories that they have not written.

Just about all of these functions have been performed in the past. Whistle-blowing is not a new phenomenon, and newspapers have long published news wire stories. But the extent of disaggregating is much greater as the opportunities for niche players in the news business become more vibrant.

Juxtaposed onto this trend of disaggregation is the search for new revenue sources for journalism. Revenues have been streaming away from the print media in recent years in huge amounts. But the expected savior, online journalism, has not delivered the cash flow that publishers expected. The good news is that audiences for journalistic organizations have vastly increased. But the value to advertisers of those visiting their sites was about one-tenth the value of a reader of print media. The cost per thousand rates (CPM) just did not hold up in the latter half of 2008 and into 2009.

The question arises, then, how will journalism, so necessary to our daily public and private lives, sustain itself? This is a broader question than sustaining any one journalistic organization or even type of distribution system. Though, some would argue with some credence that since newspapers have large experienced staffs with ingrained journalistic values, and have usually served as the news agenda setter for all media in a locality, they should be protected in some way.

I am not alone as seeing the next five to ten years as a period of experimentation for a sustainable revenue model. Clay Shirky analogizes this period to the century following invention of the printing press, described by Elizabeth Eisenstein in The Printing Press as an Agent of Change (Cambridge University Press 1979).

The good news is that there are many revenue streams for news and information visible today. These include the staples of customer subscription and advertising. A news organization can charge fees for carriage of its content. It can enter into barter or cooperative arrangements. For non-profit entities and L3Cs (low profit corporations), there is the possibility of philanthropic grants. Of course an endowment is always helpful, and other philanthropic models are emerging such as the Sandler arrangement with ProPublica. Tip-jar or voluntary contributions have worked very well for public radio. And David Westphal and Geoffrey Cowan have catalogued a history of government subsidies through tax breaks, government subsidies through cheaper postal rates, or requirements for governments to advertise legal notices in newspapers.

The point is that as new entities emerge, or older ones transform, they will undertake bits and pieces of the journalistic chain. And they will find revenues from a variety of sources in new and strange combinations. As the squares in the matrix light up, e.g., philanthropic sources and fees to support investigative journalism that does not editorialize or distribute themselves, the different combinations are limitless. The chart becomes a pixeled picture of the journalism business going forward.

Journalists serve as watchdogs to the effective operation of government, and provide much of the information a citizen needs to exercise his or her functions of citizenship. They also supply much of the day-to-day information necessary for an individual to get along in civil society. As the Knight Commission on the Information Needs of Communities in a Democracy so aptly describe, these functions are all essential to a thriving democracy. So too is the quest for finding sustainable models for the functions of journalism, however they are realized. 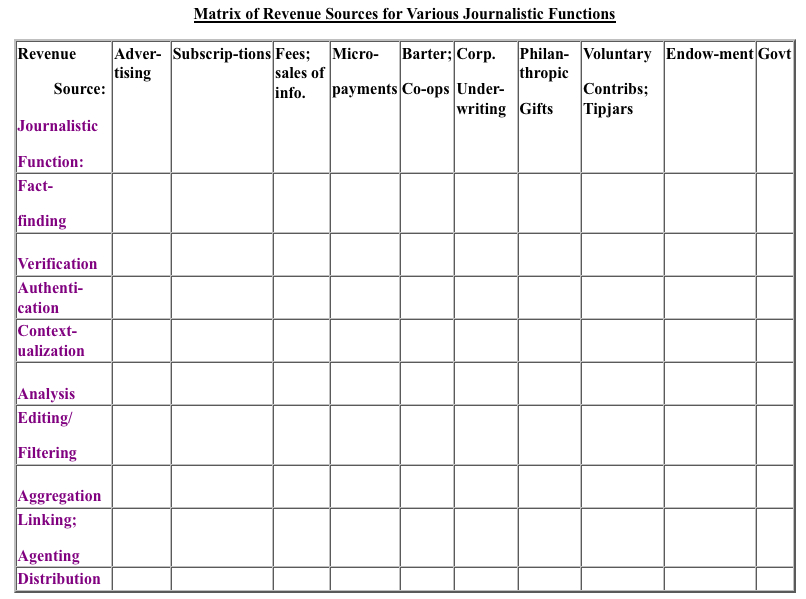 Executive Director of the Aspen Institute Communications and Society Program