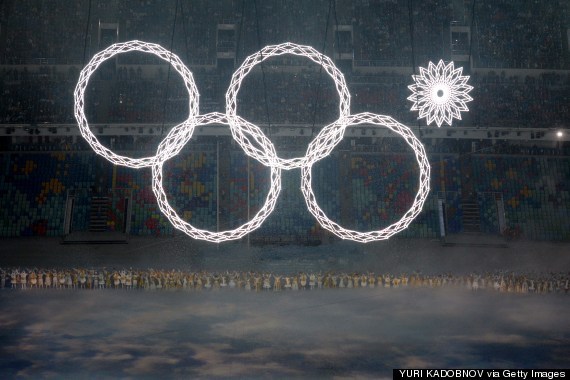 When the big Olympic Games sign flashed on in Sochi, a malfunctioning ring left a gap like an eye poked out.

According to the modernist worldview, such a glitch has no meaning. Seen through the eye of myth, however, it suggests a disturbing signal.

In my Huffington Post blog about "Earthrise" I wrote of myth as a meaningful repository of wisdom from cultures all over the world. We do myth injustice by reducing it to an outdated explanation for natural events. Myth has been disparaged as archaic, dismissed as "magical thinking," and manipulated by patriarchs and dictators, but deep down myth pulses with stories that confront us with age-old scenarios we humans always face.

For example, a local legend tells us that Sochi, the city of the 2014 Olympic Games, stands near where Prometheus was chained up in the Caucasus.

Those of us who know of Prometheus tend to think of him as a culture hero. He was a Titan, one of the race of giants supplanted by the Olympians when they came to power. Moreover, he was the Titan who stole fire from Olympus and brought it into the world for human use. For that (goes one version of the myth) angry Zeus bound him with an unbreakable chain to the side of a mountain, where an eagle ate at his liver until Hercules or Chiron (the accounts vary) finally freed the wounded god.

This is the Prometheus of Percy Shelley, the progressive, upward-moving, forward-thinking innovator and rebel against the status quo. The Prometheus, one might say, of the Olympics too, whose Latin motto is Citius, Altius, Fortius: "Faster, Higher, Stronger."

When a myth plays out in response to collective blindness, however, it is apt to show its dark side. In another telling of the Prometheus story, he was punished by Zeus not merely for stealing fire, but for showing hubris -- arrogant disrespect -- toward the rightful Olympian gods. Charged with preparing a sacrificial meal for them, he gave them charred bones instead. He got full of himself and didn't know when to quit: that, in this version, is why he hung from the Caucasus, and that is why he came down a humbled god. (The Titans, by the way, ended up confined to a box on the bottom of the ocean, final resting place of the RMS Titanic.)

Sochi has recently seen more than its share of the shadow of Prometheus. As billions in wealth raise hotels and training facilities there, its villages do without gas or water. Thousands of their residents have been forcibly evacuated, their homes bulldozed over to make room for incoming athletes and tourists. Migrant workers who lived there have been rounded up and expelled. Those who remained cannot bathe in the Mzymta because the river runs with toxins. The fruits once sold there are covered with limestone dust thrown up by recent construction. The wells have run dry.

Traditionally, the interlaced ring symbol of the Olympics stand for international inclusion. The idea for this emblem occurred to Pierre de Coubertin when he learned that, according to C.G. Jung, interlaced rings symbolize the continuity represented by marriage. Marriage, of course, is a right that gays and lesbians in Russia and large parts of the United States do not enjoy. Nor will Russia permit children to be adopted by residents of nations that recognize this right.

What about LGBTQ athletes and their families? "One can feel calm and at ease," Putin replied at a press conference. "Just leave kids alone, please." His government certainly does. According to UNICEF, the largest group of the poor in Russia are children below the age of 14.

The ring that shorted out in the traditional display of international inclusion was the red one. In Russian the word for "red" is related etymologically to the word for "beautiful." Both words characterize well-known Russian warmth, Russian passion, Russian inspiration, and centuries of Russian cultural aspiration and achievement. As in other nations, however, Russian life squirms in the clenched fist of a political and economic elite that care nothing for who or what they destroy. Their red is the red of fever, of blood, and of Promethean flames burning landscapes in the furnaces of unchained industry.

So we come back to that eye, or the asterisk -- the footnote -- where the eye should have opened. An eye symbolizes many things, among them insight, perspective, and a capacity for vision. Will we remember this Olympic Games only for who won and lost, or for what we truly saw behind the scenes?