Today's column by Nicholas Kristof in the New York Times entitled "Our Basic Human Pleasures: Food, Sex and Giving" struck a chord as he offered examples of how we feel good when we do good. Obviously, this relates to the massive response to the Haiti earthquake.

Let me add an evolutionary note.

The predominant opinion used to be that humans are rational profit-maximizers. Society was built around this principle, with Margaret Thatcher and Ronald Reagan as its political champions. Biology supported it, by talking of "selfish genes," which some mistook to mean that we must by definition be selfish, too. Greed was good.

Over the past decade, doubts developed in economics, anthropology, psychology and neuroscience, culminating in a group of scientists declaring humans naturally inclined to cooperation, and naturally empathic and altruistic. They questioned the rational choice model of Homo economicus. But they also declared us unique, claiming that humans are the product of some special evolutionary force. They seemed to be proposing a "divine spark" even though they never put it this way.

In the meantime, primatologists were debating altruism, too, and found the same or similar empathy and altruism outside of our own species. Monkeys and apes sometimes take great risks to help each other, for example against predators (chimps in the forest defend each other against leopards) or enemies (females defend each other against violent males). Chimpanzees spontaneously share food with each other, and in recent experiments it was found that primates will secure rewards for others even if this does not benefit themselves in any way. Since they didn't need incentives to do so, it is possible they were doing it for some internal reward. Perhaps other primates, too, derive pleasure from giving.

The situation under which they follow this impulse is almost certainly more limited than in humans, but the underlying psychology may well be the same. 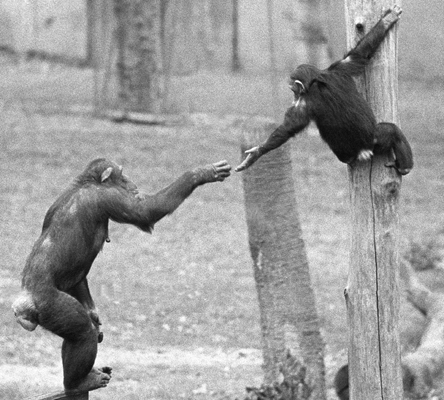 Chimpanzees show spontaneous altruism (here a mother helps her son out of a tree) confirmed by recent systematic experiments on the helping response.

This obviously changes the picture of nature. Instead of claiming human empathy as unique, a recent product of evolution, it may be much more deeply ingrained. This is an optimistic message. I would worry if a capacity as important as empathy had evolved only yesterday, since this might mean it could disappear tomorrow.

This doesn't make the helping response selfish, however. This is a misleading way of putting it, since true selfishness would dictate to keep everything for yourself. All it means is that nature has provided us with a built-in incentive to engage in behavior that strengthens the community in the same way that it has given us built-in incentives to eat and reproduce.

We should stop listening to ideologues who tout their dog-eat-dog view of nature as a prescription for society, and start taking the latest evidence about the human primate into account.