Though I recently gave into the iPhone, I was for many years a Nokia man. And for most of those years I contented myself with the default ring tone, known simply as the "Nokia tune." This tune, which you have heard nineteen times this week, goes something like: yada da da, yada da da, yada da da daah. This link will remind you what it sounds like if you need reminding: http://www.phoneboy.com/wp-content/uploads/2008/05/nokia-tune.mp3

For a long time I assumed this simple melody was Nokia's invention, but a curious musical incident made me question this assumption. I had bought a collection of (sheet) music by Francisco Tárrega, the late-nineteenth-century Spanish guitar composer, and was playing through some of the pieces while a friend made dinner. At a certain cadence in a less-familiar piece titled Gran Vals, my friend came out from the kitchen and said, Isn't that a ring tone? I thought this was very clever of her to notice but passed off the similarity as a coincidence. 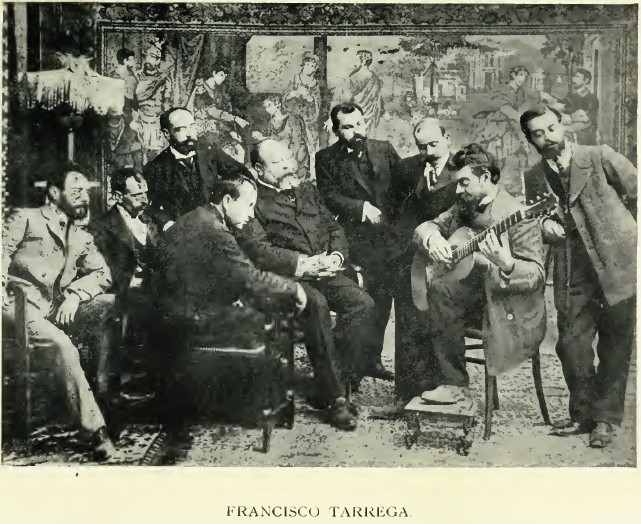 But as I heard the tune more and more often--especially during a year in Europe, where Nokias are popular--I really started to wonder. The tone also underwent some changes that made it sound more like the Tárrega piece. Whereas the melody once was rendered as if by a rather unmusical robot, in later versions it acquired rubato (a more flexible approach to the meter), harmonization, and new instrumentations, piano on some phones (http://www.zedge.net/ringtones/607288/nokia-tune-piano-ringtone/), guitar on others. It was when I heard the guitar version--coming, appropriately, from the pocket of a Spanish tourist on Fifth Avenue, that I suspected my friend must have been right.

The somewhat uneventful denouement to this part of the story is that, on Googling "Nokia tune" a few weeks ago, I was easily able to confirm the Tárrega hypothesis--something which
I am probably the last guitarist in the world to have done. Indeed, simply hearing the piece makes the source fairly obvious (the excellent recording here is inexplicably accompanied by video footage of a Swiss hotel): http://www.youtube.com/watch?v=1-0fn8t5AMI

Nokia hardly makes the tune's provenance a secret, devoting a paragraph to it on the company's website (chosen in 1994, used on tens of millions of phones, etc.). Older Nokia phones in fact listed the piece as Grande Valse (Frenchifying the original Spanish). Nokia has since trademarked the melody--something no one would have dared to do with, say, Beethoven's Fifth, or even with a Chopin waltz, but which the company must have justified by saying that the ring tone made Tárrega famous and not the other way around.

Using classical music for branding purposes is nothing new, and the case of the Gran Vals may appear no different from that of the duet from Delibes's Lakmé (famous from British Airways commercials) or Gershwin's Rhapsody in Blue (United Airlines). A great many themes from classical music--Chopin's Fantaisie-Impromptu and Mozart's G-minor Symphony, to name two--have gone on to dubious glory as ring tones. It would be quite pointless to lament this outcome, as these melodies, which have long been in the public domain, were overexposed long before cell phones ever existed. And besides, wouldn't Mozart be somewhat amused to hear his themes tweeting from the front seat of a cab in, say, Bangalore, in the year 2009?

But the irony of the situation seems greater in Tárrega's case, for Tárrega, a composer greatly loved by guitarists but hardly famous in the way of a Mozart or a Chopin, was known to be a tremblingly shy man who could bear playing in front of only very small audiences, ideally composed of people he knew. To think that one of his pieces, and not even his most famous piece, would achieve this kind of ubiquity would have given this delicate man a very great shock. It is hard to know whether to see this second life for his little waltz (Gran is hardly the word) as a tribute to a charming composer, or as another sad little story of an artist receiving too little credit for his work. But if the latter seems to be the case, there is a simple solution. Next time that familiar chirp arises on a city street, or, God forbid, in a concert hall, we must simply think: Ah, the Tárrega tune.