Las Vegas, Nevada. A quick drive down just about any major road gives a picturesque, skyline view of the strip. And at the head of it? The Stratosphere Hotel. 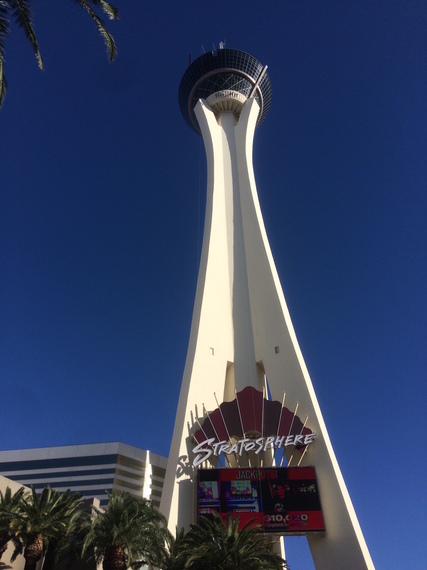 This monstrous building stands at a maximum height of 1,149 feet, and holds the record for the tallest freestanding observation tower in America. The hotel is home to thousands of rooms, a large casino, and 4 of the scariest attractions in the world- Big Shot, Insanity, X-Scream, and The Las Vegas Sky Jump.

Today I'm mainly going to focus on the three rides at the very top of the tower, which excludes the Sky Jump. If you'd like to read about my experience there, I encourage you to check out this separate article: http://www.huffingtonpost.com/taylor-bybee/you-can-pay-to-jump-off-t_b_13114790.html 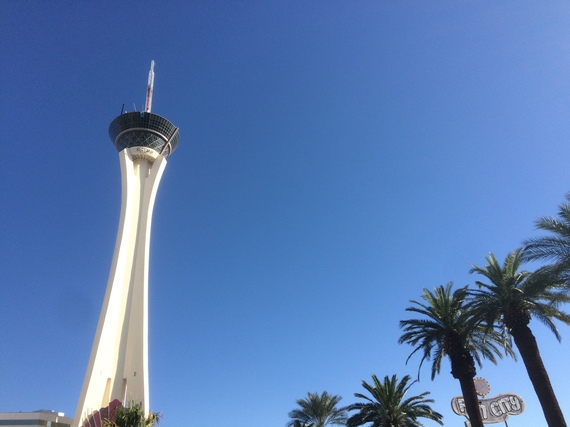 I think at some point everyone has at least heard of "those crazy rides at the top of that one building in Vegas," but of those people, how many of them get around to riding them? And that includes those who make it up to the top of the tower and chicken out! These rides are definitely not for everyone. You may plan on doing them, but if there's any nervousness in you, then it's all the more likely that you may decide to back out.

Those feeling adventurous and wish to conquer the famous 3 must first purchase tickets at a desk to the side of the casino in the lobby. Your options are to pay for the rides individually if you don't want to ride all 3, or to buy a wristband for unlimited rides. Funny enough, I opted for the wristband, but after riding each of them once, I didn't have the desire to do them again!

Once you've purchased your tickets, you'll proceed up an escalator which will bring you to the main elevators- the same elevators that'll bring you up over 100 floors to the very tippy top of the Stratosphere. 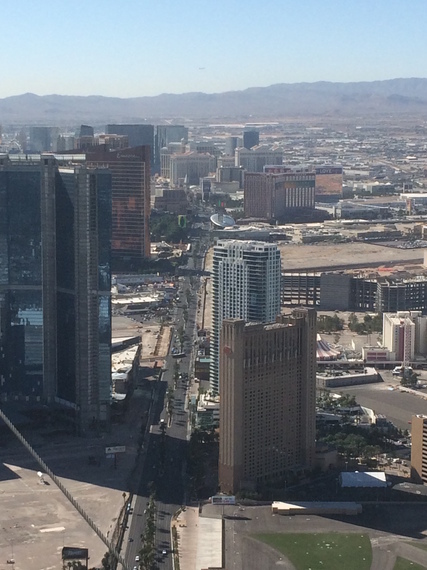 The view of the Strip from the top

Once you've arrived at the top (and yes, your ears will pop on the way up) you'll be greeted with an unbelievable view of all of Las Vegas. It truly is a sight to behold- but that's not why you're here.

So, which will be first? X-Scream, Insanity, or Big Shot? Should you start with the one that freaks you out the least, or start with the most intimidating? I don't have any advice for strategies, but I personally chose to start with Insanity. 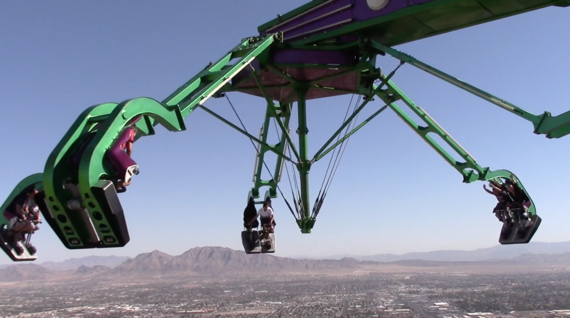 Let me first say that roller coasters don't scare me. I've ridden almost 300 different coaster by now and not one of them freaks me out.

Put the ride on the ground and its a kiddie ride. Put it 900 feet in the air, and suddenly even the bravest back out. Really this statement goes for all of the rides at the Stratosphere. The only reason why people freak out over these is because the rides feed on the fear of heights. Insanity shoves this fear right in your face, as it literally forces you to look at the ground below you. 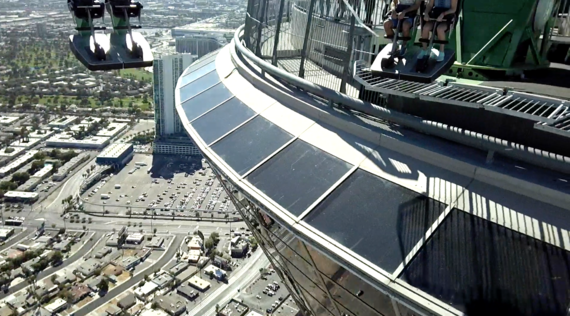 What I thought was interesting was that I didn't even think the spinning was the worst part! To me it was when it slowly moves you off the ledge and out over the edge. During that time, you're just praying that the people that built this thing knew what they were doing and that it wouldn't break and send you falling to your death! Luckily for us, the manufacturers did know what they were doing, and the ride is completely safe.

But it's still freaky. 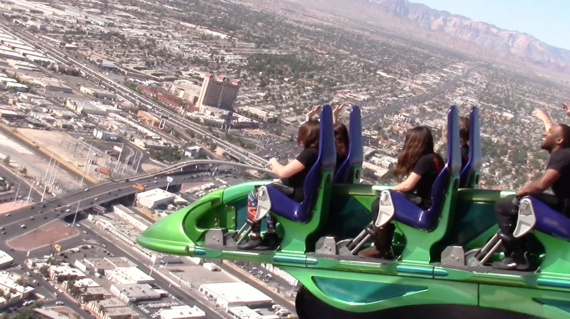 So how do you recover from a ride like Insanity? How about by one-upping it, by facing your fears on X-Scream! To simplify this ride- think of a seesaw over 800 feet in the air.

Yeah, its terrifying. In my opinion, the scariest ride at the Stratosphere. Probably the scariest ride I've ever been on, even though I knew I was perfectly safe and had been watching it for 15 minutes before riding. Being on it makes your palms sweat, especially if you're in the front seat. Which I was. You can actually see a front seat POV of it here:

As you might've noticed, the front of the vehicle goes out over the edge. This is because the designers had the brilliant idea of putting the wheels farther back, to further intimidate riders. And it absolutely works! There isn't a whole lot to it, but this is a prime example that sometimes you don't need a big fancy ride to bring the guests in. In short, its a pretty simple contraption. And like I said earlier, if you were to put it on the ground, it'd be pathetic. Interestingly, there is a kid version of this in Santa Clara, at California's Great America. The ride is called Gr8 Sk8, and is in the Planet Snoopy section of the park. 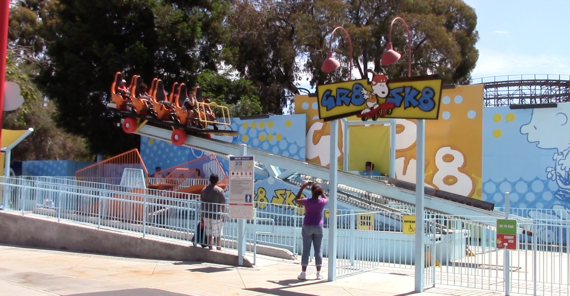 Literally a kids ride. Grown men won't ride it cause its lame, but once you put it on top of a building, grown men still won't ride it, but this time because they're too scared!

Finally, our last ride is Big Shot! This remains the highest drop tower in the world, even though the actual drop height is only 160 feet tall. Riders start off by accelerating up to the top of the tower at 45 mph, giving you the highest view in all of Vegas. Too bad you only have a few seconds to take it in! 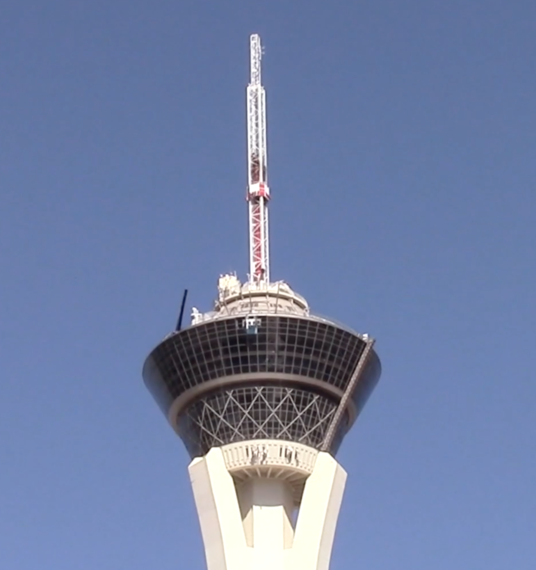 To ride Big Shot, you must once again hop in the elevator and go up about 6 stories to the very top of the building. This is the highest observation point of the Stratosphere, with the only thing to do up there being Big Shot. The experience overall is similar to many drop towers by the same manufacturer, with really the only main difference being the location and the view.

In general, The Stratosphere rides are some of the most intimidating rides I've ever seen, but most certainly are worth trying! If you go in with the mindset that the rides are safe and you're there to have a good time, then you'll enjoy yourself. Though the rides were a little freaky, I still loved being up there. My experience was great and I'm so glad I did it- makes for a great story!

If you'd like to see some HD footage of the 3 rides, you'll want to see this:

Like what you see? For videos of rides at theme parks around the country, make sure to subscribe to Coaster Studios: https://www.youtube.com/user/TheCoasterguy14