Although ultrarunning is a grueling sport, I find ultrarunning helps to heal the heart, soothe the soul, and overcome obstacles. One obstacle runners will stumble upon is the unexpected DNF (did not finish). I have completed 13 ultras. I have had 4 DNFs. Each has taught me about humility, picking myself up and dusting myself off, persevering and plotting my next ultra. A DNF is not failure.

After completing four 50-mile ultras, I decided to tackle the 2007 Laurel Highlands 70.5 Ultra. The course is very technically challenging. It was a hot, humid, cloudy, and misty morning. The air was heavy. It had poured the night before. The first 19.3 miles -- the first cut-off -- were tough. I had faith I could make the cut-off.

For the first time in my ultra experience, I found myself taking breaks to catch my breath, and mustering the strength to go on. I felt weak. My legs were running out of gas. I scaled and crawled my way up the massive boulders. I finally reached the first cut-off.

My husband and children cheered me on. The race volunteer also greeted me. "I didn't make it, did I?" "No," he said gently shaking his head and making note of my bib number on his clipboard. I missed the cut-off by twenty minutes and was bestowed my first DNF. The experience was very humbling. Down but not out, I began training for the 2008 Great Eastern Endurance Run (GEER) 100K, another arduous trail ultra. The distance was greater than 50 but less than 70. I was pumped.

Running GEER along the Blue Ridge Mountains was appealing. But it poured the night before. The technically brutal trail was wet. I was feeling good at mile 40. Only 22 miles to go! But at mile 45 I was started to feel mentally wiped. Jon, my husband, began pacing me. He gave me renewed energy but I was worried. It was 8:30 at night. The course was now all uphill rocky terrain and boulders in the dark. I felt chafing and a burning sensation underneath my sport bra. My feet were wet from running through flooded streams, creeks, and rocky trail roads earlier.

After mile 50, I found myself climbing up a monster mountain for most of the next 6 miles. I stopped intermittently to catch my breath. Under the starless night sky I vomited at mile 55, a first for me. I pushed through and made the cut-off at mile 56.5. It was 11:30 pm and cold. Not one star was twinkling in the pitch-black sky. My headlamp directed me to more darkness.

My blisters were stinging. A fungal infection was simmering in my toes. I had fallen five times on slippery rocks in flooded creeks. My knees, elbows and wrists were scraped. I didn't want to risk serious injury tiptoeing and dragging my broken body down the treacherous rocky mountain road. With 5.5 miles to go, I disqualified myself. I would not make the 19-hour time limit. Jon and I hitched a harrowing roller coaster ride back to civilization. In the back of a local hunter's unforgiving corrugated steel bed of a pick-up truck, my body endured another beating. I was one of the 71 starters but not one of the 29 finishers. 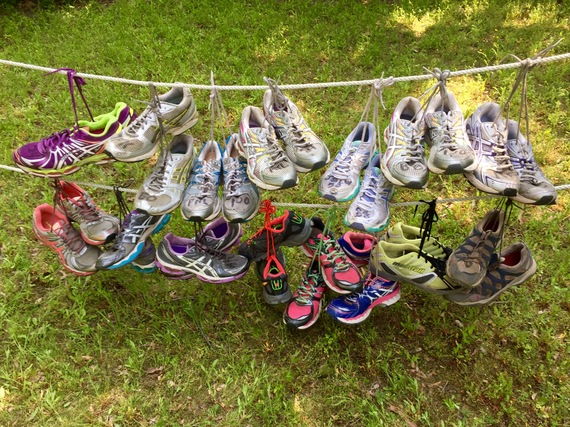 Six months after surviving a third abdominal surgery and my medical nightmare, I set my sights on the 2013 Dirty German 50-mile trail ultra. Race day was a beautiful spring day. I was feeling good at mile 18. Soon I was running a bit slower. At the mile 26.5 aid station, I had 1 hour and 30 minutes to finish 8.5 miles and meet the 8 hour/35 mile cutoff. I was not physically strong enough to make the cutoff. I earned another DNF but I was happy I completed 26.5 miles.

In 2015, I ran in the C&O Canal 100, my third 100-miler. I ran with a cold, a sore throat, and tons of throat lozenges. I was wheezing. But my legs and my heart were strong. After completing the first 50 miles, I was happy. I had about 18 hours to complete the last 50 miles. It was cold and getting dark. The rain, at times sprinkled with hale, came down for four more hours. I dragged my frozen feet across the flooded rocky creek. I survived the climb up the slippery and muddy trail. I made the mile 60 cut-off.

Jon began to pace me. The rain stopped. The towpath was muddy, slippery and a bit flooded. I was feeling sick. We made it to mile 66. At the aid station, foot heaters and sips of chicken broth warmed my shivering body. The kind volunteer gave me his running gloves. Mine were soaked. My hands were freezing.

I was sleep deprived. With diminished cognitive functioning and slurred speech, I shuffled my feet to the next aid station and to mile 69.2 with Jon by my side. It was 3:10 am. I was freezing, cold, coughing, hoarse, wheezing, and nauseous. I announced I could not continue. Another DNF but with no blisters and all my pink toenails intact! At the motel, I took a hot shower, puked, and felt much better. Three days later I was diagnosed with bronchitis, first time ever.

Lessons of a DNF

There are conditions and obstacles we cannot control. In an ultra, or any race, weather and terrain will impact the mind, body, and spirit. Although mentally pumped to conquer the miles, sometimes our bodies deceive us. We are not always as physically strong as we think we are for the grueling challenge. Not finishing is OK! A DNF is not failure; it's an opportunity for future success. Embrace the lessons of a DNF -- stay humble, stay on course, and plot your next ultra.