The U.N. admits that the road to gender equality has been "slow" moving and hampered by regression. But it has committed to accelerating its efforts in order to meet its new 2030 deadline.

U.N. Women unveiled a campaign on Friday that’s urging countries to commit to achieving equal rights for women within the next 15 years. The "Step it Up" initiative tasks world leaders and governments with implementing laws and policies that will put women on equal footing with men in the areas of social, economic and environmental development.

"Creating a world with greater equality for generations to come is the defining and most urgent challenge of this century," Phumzile Mlambo-Ngcuka, executive director of U.N. Women, said in a statement. "Gender equality and the realization of women’s and girls’ human rights are fundamental for achieving human rights, peace and security and sustainable development."

The initiative was timed to coincide with International Women’s Day and the 20th anniversary of the Beijing Declaration and Platform for Action. When that plan was put forth, advocates at the time had "high hopes" for putting an end to human rights violations against women, but it has fallen short, Mlambo-Ngcuka said in a taped statement.

In its exhaustive analysis of how women have fared over the past two decades, U.N. Women outlined how progress has been "uneven" and what it will take to establish gender equality.

The report pointed to a number of areas that have shown some promise.

Girls’ enrollment in primary and secondary education has improved, for example. Maternal deaths have dropped. Women’s participation in the labor force has increased. In some regions, incidents of such harmful practices as female genital mutilation and child marriage have declined.

Even these victories, however, are tenuous because they are threatened by rising extremism, deep-seated discriminatory norms and stereotypes.

Such systems have allowed plaguing human rights abuses against women, which in some areas are worse now than they were when the Beijing plan was put forth, to persist.

In all regions, the rate of violence against women in disturbingly high, with 35 percent of women having experienced physical and/or sexual assault. Globally, young women have a 50 percent higher risk of becoming infected with HIV, compared with their male peers. Women are also more likely than men to live in poverty.

In Africa, for example, 70 percent of crop production depends on women, yet women own less than 2 percent of the land.

While advocates are supportive of the UN’s goal, they say that efforts to empower women need to be just as strong in the U.S. where women face many of the same issues those in developing countries struggle with.

“The old saying, 'think globally, but act locally,' still applies,” Noreen Farrell, executive director of Equal Rights Advocates, told HuffPost in an email. “To actually achieve [full equality], we will need to fight and win many big and small battles all around the world, including here in the U.S. where issues like the gender pay gap, sex discrimination, and poverty continue to limit opportunities for women."

While the U.N. is putting the pressure on world leaders to take a stronger stance, a number of inescapable crises stood in the way of developing meaningful progress.

Persistent conflicts, financial and economic crises, volatile food and energy prices, and climate change have deepened inequalities and have adversely affected women and girls, according to the U.N. report.

But the U.N. is focusing its efforts on addressing cultures of violence, masculinity and militarism.

To get there, the organization has first asked countries to definitively commit to making gender equality a priority.

U.N. Women envisions those commitments succeeding, though, on the community level with “context specific” strategies.

"No country has achieved gender parity, despite the many good laws that have been passed," Mlambo-Ngcuka said in a taped address. "This means that we cannot continue in the same way and expect far-reaching changes. Business as usual will erode the gains we have made, so we have to step it up." 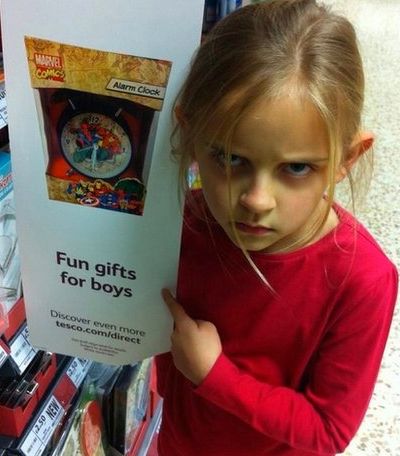 1 / 15
Maggie Cole
Late last year, Tesco removed a sign which singled out a superhero alarm clock as a "fun gift for boys" in response to a complaint about gender stereotyping. The author of that complaint? <a href="http://www.bbc.co.uk/news/uk-england-dorset-30191100" target="_blank">Seven-year-old Maggie Cole</a>, who proved you're never too young to make a change.
Karen Cole/Twitter