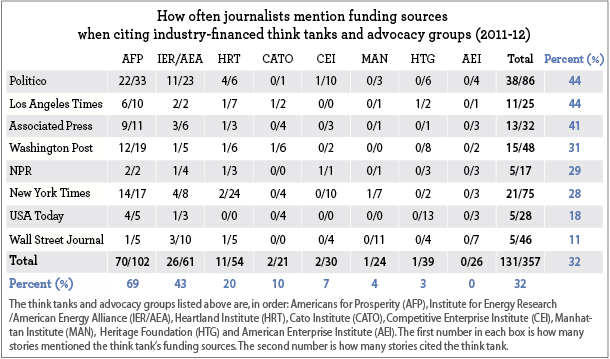 Part 1: A Glaring Lapse in Climate and Energy Coverage

One of my morning rituals is half-listening to NPR's "Morning Edition" while I'm getting ready for work. But on January 3, when a story came on about the fate of the wind industry's production tax credit, I snapped to attention. It was good news. Congress's eleventh hour "fiscal cliff" agreement had left the tax credit in place for at least one more year.

The NPR story featured a spokesman for a small Iowa wind project who explained how the tax credit benefits rural communities. For balance, it also included a naysayer: Thomas Pyle from the American Energy Alliance, who wanted Congress to kill the subsidy.

"It's not that the subsidies for the wind industry in and of themselves are bad, but it is part-and-parcel of a larger problem, and that is, is that the federal government is notoriously bad at energy policy," Pyle said. "They have been for decades, and we think it's time for them to step aside."

But who is Thomas Pyle and what is the American Energy Alliance? The story didn't say.

It turns out that the American Energy Alliance is a front group for the oil and gas industry. Pyle, AEA's president, is a former lobbyist for the National Petrochemical and Refiners Association and Koch Industries, the Wichita, Kansas-based coal, oil and gas conglomerate owned by the billionaire brothers Charles G. and David H. Koch (pronounced "coke"). Koch Industries is the second largest privately held company in the country.

Digging a little deeper, I learned that AEA is the political arm of the Institute for Energy Research, where Pyle also serves as president. From 2006 to 2010, IRE received hundreds of thousands of dollars from the oil and gas industry's trade association, the American Petroleum Institute; ExxonMobil; and the Claude R. Lambe Charitable Foundation, a philanthropy controlled by Charles Koch.

OK, but didn't Pyle say the federal government should stop subsidizing all energy? That sounds pretty evenhanded, right? In fact, as aggressive as Pyle and his benefactors are about undermining their competition, they are even more vehement about protecting themselves--and they know full well their friends in Congress wouldn't dare touch oil and gas subsidies. Indeed, legislation introduced last May to pull the plug on the billions in annual tax breaks and subsidies the oil, gas and coal industries enjoy died a quick death.

Obviously there wasn't enough time to explain all that in a four-minute news segment. But at the very least the reporter should have identified Pyle as an oil and gas industry spokesman. I emailed the reporter later that day to point that out. I got no response.

Twenty-five years after NASA scientist James Hansen testified at a Senate hearing that scientists know with a 99 percent certainty that burning fossil fuels--not natural climate variations--is warming the planet, there are many reasons why Congress has yet to take significant steps to curb U.S. carbon emissions. The hundreds of millions of dollars oil, coal, auto and manufacturing industries have donated to federal candidates is certainly a factor. So are the hundreds of millions of dollars they've spent to lobby them once they're elected.

But the news media are also to blame. Too often they have provided a platform for fossil fuel industry-funded think tanks and advocacy groups to make spurious claims about global warming and renewable energy and allowed them to pass themselves off as independent, disinterested parties promoting free markets and limited government.

Over the years, journalists have consistently relied on these groups to provide the "other side" in climate and energy stories when, in fact, there is no other side--at least not on the science or the fact that we have to wean ourselves off fossil fuels to avoid some of the worst consequences of climate change. All too often, however, the news media have presented these two sides as equivalent, despite the fact that one rests its argument on peer-reviewed climate science while the other promotes the distortions of industry-funded contrarians, most of whom are not climate scientists--or even scientists at all.

NPR's ombudsman addressed this deficiency two years ago. "NPR often does a lousy job of identifying the background of think tanks or other groups when quoting their experts," Alicia C. Shepard wrote in an essay posted on the network's website in April 2011, just a month before her three-year tenure ended. "NPR also rarely explains why listeners should pay attention to the experts it chooses to quote. This matters."

Shepard was right. It does matter. But her solution of just tacking on "libertarian," "conservative" or "liberal" labels doesn't sufficiently inform the public whose interests these think tanks are serving. In any case, her message apparently fell on deaf ears. The glaring omission in the January 3 story is still more the rule than the exception at NPR, and the network is not alone. Most, if not all, mainstream news organizations are guilty of the same transgression.

To gauge just how widespread this failure is, I recently looked to see if elite news organizations reported funding sources for eight prominent climate contrarian groups in climate and energy stories that ran from January 2011 through December 2012. The groups--which I have dubbed the "Oil Eight"--are the American Enterprise Institute, Americans for Prosperity, Cato Institute, Competitive Enterprise Institute, Heartland Institute, Heritage Foundation, Institute for Energy Research (and its political arm, American Energy Alliance), and Manhattan Institute for Policy Research. When it comes to climate, the Oil Eight share the same goals as their corporate underwriters: sow doubt about the reality or seriousness of global warming, stifle government efforts to curb carbon emissions, and hinder the growth of renewable energy technologies.

Who are their corporate underwriters? From 2001 through 2011, the Oil Eight collectively received more than $23 million from one or more of the following interested parties: the American Petroleum Institute, ExxonMobil, General Motors and three Koch family foundations: the Charles G. Koch Charitable Foundation (now the Charles Koch Foundation), David H. Koch Charitable Foundation and Claude R. Lambe Charitable Foundation, according to data I gleaned from federal tax filings, the Foundation Center and the Bridge Project's Conservative Transparency database. In addition, another Charles Koch philanthropy, the relatively unknown Knowledge and Progress Fund, contributed nearly $8 million from 2005 to 2011 to a secretive, pass-through foundation called Donors Trust. From 2001 through 2011, Donors Trust and its affiliate Donors Capital Fund laundered more than $54 million of largely untraceable contributions to the Oil Eight, far outpacing ExxonMobil and the three main Koch family foundations.

Using the Nexis database and the news organizations' archives, I tracked coverage by the Associated Press, NPR, the political trade journal Politico, and six leading newspapers: the Los Angeles Times, New York Times, USA Today, Washington Post and Wall Street Journal. I confined my search to stories on climate and energy, so I excluded pieces that focused on industry funding without mentioning either topic.

After poring over more than 1,000 stories, editorials, opinion columns and interviews, I narrowed my sample to 357 relevant pieces. Here's what I found: These top news organizations provided information about the Oil Eight's fossil fuel industry funding in only 32 percent of the climate and energy stories they published or aired over the two-year period. 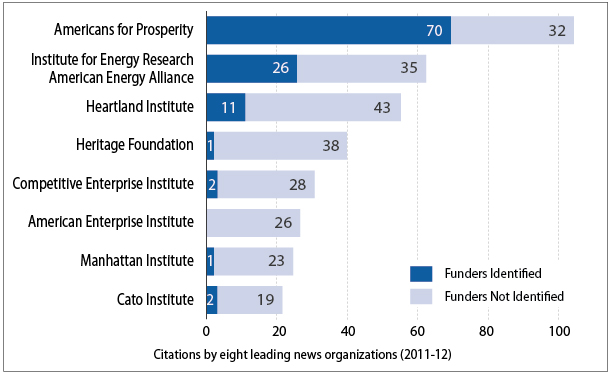 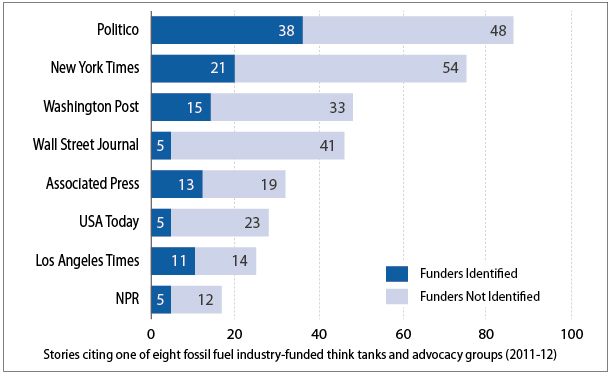 In the following five installments, I will provide examples of how the news media fell down on the job, and offer recommendations for how journalists can better serve the public interest. Part 2 of this series shows how the news media allowed themselves to be duped by the one of leading members of the Oil Eight, the Competitive Enterprise Institute.