The trickster is an archetype whose presence is not limited to mythology. While there will always be a shape shifter like Loki lurking around (and plenty of kupua roaming Kauai and the neighboring Hawaiian islands), fast-thinking humans have always had a talent for distracting onlookers in times of crisis. Why else would someone give the order to "Send in the Clowns"?

Whether they rely on advanced planning, sleight of hand, or a talent for improvisation, folks with impressive problem-solving skills are blessed with a kind of mental flexibility and analytical insight that allow them to juggle more than one crisis at a time. As I learned at a very early age, there are three types of people who can quickly be identified in any emergency:

If anything, 2015 will be remembered as year full of bluster. As Macbeth famously noted:

"Tomorrow, and tomorrow, and tomorrow,
Creeps in this petty pace from day to day
To the last syllable of recorded time,
And all our yesterdays have lighted fools
The way to dusty death. Out, out, brief candle!
Life's but a walking shadow, a poor player
That struts and frets his hour upon the stage
And then is heard no more: it is a tale
Told by an idiot, full of sound and fury,
Signifying nothing."

While it would be easy to think those words applied to Donald Trump, as I look back on some of the last attractions of 2015, I can't help but marvel at how two characters cunningly played their cards in their ongoing struggles to outwit foolish old men. One was a beloved baritone from one of the world's most popular operas (which celebrates its 200th birthday in 2016). The other was a fictional lover portrayed by the greatest escape artist of the 20th century.

Born in Budapest on March 24, 1874 as Erik Weisz, Harry Houdini had one of the most recognizable stage names of the 20th century. Long before contemporary divas with one-word names like Cher, Madonna, and Rihanna were born, he was known simply by his last name: Houdini. Upon arriving in the United States, his family settled in Appleton, Wisconsin, where his father (a rabbi) led the Zion Reform Jewish Congregation.

From his early appearances in vaudeville (he made his stage debut as a trapeze artist at the age of nine) to his role as President of the Society of American Magicians, Houdini became internationally famous for his escape acts -- as well as the zeal with which he exposed fakes and spiritualists. Having baffled British police at Scotland Yard with a demonstration of his handcuff-escaping prowess, Houdini toured Europe, Russia, and was hailed far and wide as "The Handcuff King." Few people today can recall seeing him perform in silent film (an entertainment form he abandoned because he felt he couldn't earn enough money from acting). 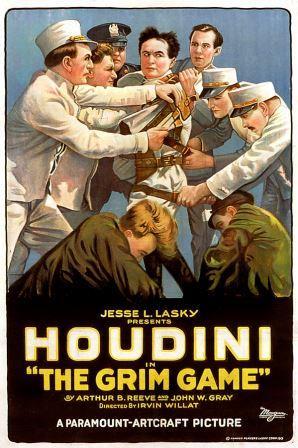 Yet there can be no doubt that Houdini (who often showed silent films of himself performing escape acts as part of his vaudeville routine) was a fierce presence on the silver screen. As part of its day-long minifestival entitled A Day of Silents, the San Francisco Silent Film Festival presented a rare screening of Houdini's first feature film, The Grim Game (1919). Restored by Turner Classic Movies, the 71-minute film was seen by the public for the first time in 96 years on March 29, 2015.

Directed by Irvin Willat (with a screenplay by Walter Woods), The Grim Game features Houdini as Harvey Hanford, an aspiring journalist for The Daily Call who has devised a plan to show how circumstantial evidence can be misleading during a trial. Hanford is secretly engaged to Mary Cameron (Ann Forrest). The fact that Mary's father, Dudley Cameron (Thomas Jefferson), is a rich old geezer who loathes his black sheep nephew (Hanford) sets up an opportunity for an intricate embezzlement scheme. 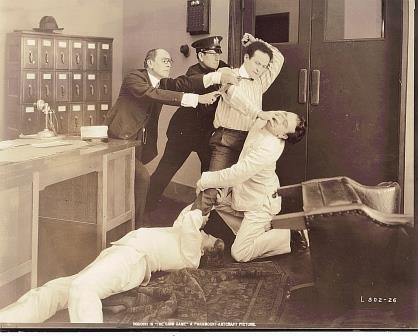 Harry Houdini makes a daring escape in The Grim Game

When Hanford concocts an intricate scheme to prove his theory, he approaches the three conspirators to help frame him for the murder of Mary's father. But when things go horribly wrong and Dudley dies in an accident, the reporter is arrested on false charges and finds himself being double-crossed by the trio of scoundrels. The film's plot provides numerous opportunities for Houdini to leap through open windows, escape from jail, and end up a romantic hero. 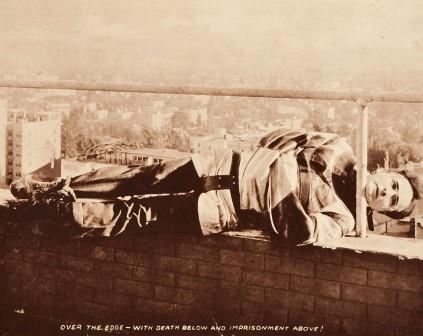 The Grim Game is great fun, with supporting roles taken by Mae Busch as Harry's friend Ethel Delmead, Edward Martin as a police reporter, and Jane Wolfe as Hannah. The grand climax includes a death-defying biplane trick filmed over Santa Monica with an unexpected mid-air collision that was quickly woven into the plot (a stunt double was used for Houdini). As Michael Fox writes in his program note:

"Houdini was an impressive screen presence even when he wasn't engaged in his specialty. A barrel-chested bantamweight, he exudes strength (even in a three-piece suit and boater) and strides with confidence and purpose. He gives off an attractive aura of pent-up energy yet is utterly patient and comfortable in his scenes with love interest Ann Forrest. The man was not remotely intimidated by the camera, professional actors, or the looming audience; indeed, he seemed to revel in the whole enterprise of being watched.

The Grim Game was [about] watching Houdini's skillful disposal of handcuffs, chains, et al. His ability to escape any form of imprisonment (and to break in, on occasion) was the equivalent of a contemporary superhero's unique power and reassured viewers that good triumphs over evil, at least for the picture's running time. The public didn't need to know that the filmmakers employed a stunt double now and again. Houdini even went so far as to brazenly fuel the perception that he was onboard for the airplane crash that provides the film's climax. (The More Things Change Dept.: A hundred years on, with CGI the norm, Tom Cruise and other action stars go to great lengths -- and heights -- to convince audiences they don't simply exert and emote in front of a green screen and an industrial fan)." 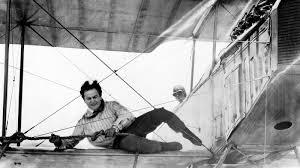 With Donald Sosin accompanying the screening on piano, a rollicking good time was had by all. Here's some footage of the famous biplane sequence.

When Emilio Sagi's new production of The Barber of Seville was introduced to San Francisco Opera audiences in November 2013, it immediately became apparent that this production was built to last several decades with a greater sense of life than many previous stagings of Gioachino Rossini's beloved comedy. As Sagi explained:

"I conceived the opera as a fragile jigsaw puzzle in which each scene is presented like a sketch, forming a series of mosaics, united by that frenetic poetic rhythm of the music, which pulses along the entire length of the opera. The vitality, bustle, and spontaneity of the Andalusian 'street people' with their dance songs and their flamenco-inspired body language are evoked throughout the entire opera. The scenery materializes with the music of the overture, emerging from the obscurity, the vacuum, the void. The triumph of love gives way to a progressive emergence of colors in fabrics and flowers right up to the grand finale." 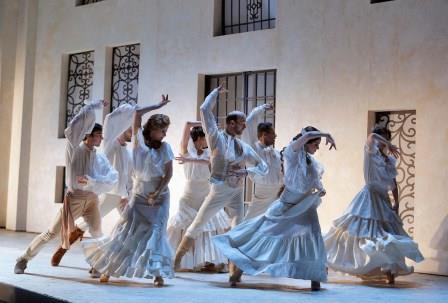 Dancers appearing as "Andalusian Street People" in a
scene from The Barber of Seville (Photo by: Cory Weaver)

The San Francisco Opera revived this charming production with most of the original cast (including some members of 2013's alternate cast) returning to the stage for a chance to further polish their performances. Under the baton of Giuseppe Finzi (who helmed the 2013 production), there was an inspiring mesh of the ensemble which allowed the audience to appreciate the balance between the opera's romantic and buffo roles. 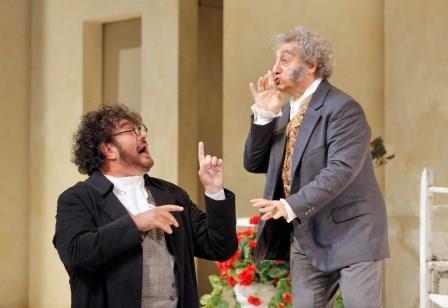 Don Basilio (Andrea Silvestrelli) and Dr. Bartolo (Alessandro
Corbelli) in a scene from Rossini's The Barber of Seville
(Photo by: Cory Weaver)

The happy efficiency of Lorenç Corbella's unit set combined with Pepa Ojanguren's costumes and Gary Marder's lighting design kept the production looking bright and perky, easily winning the affection of the audience (with the exception of the bored woman seated across the aisle from me who kept her head buried in her well-lit IPad while her husband sat rigidly at attention, obviously enthralled by the performance). 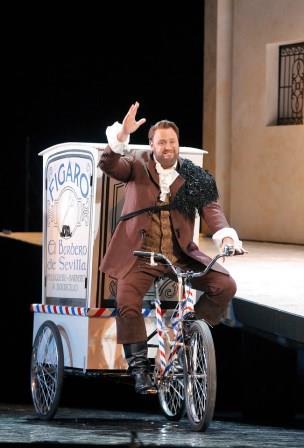 Lucas Meacham was the wily Figaro in
The Barber of Seville (Photo by: Cory Weaver)

Lucas Meacham returned to the streets of Seville as Rossini's amiable barber and go-to guy (Figaro) who must help the Count Almaviva (René Barbera) win the love of Dr. Bartolo's ward, Rosina (Daniela Mack). As much a fixer as a trickster, Figaro also helps Almaviva get into character as a last-minute stand-in for Rosina's music teacher, Don Basilio (Alessandro Corbelli), as well as a drunken soldier determined to camp out in Bartolo's house. 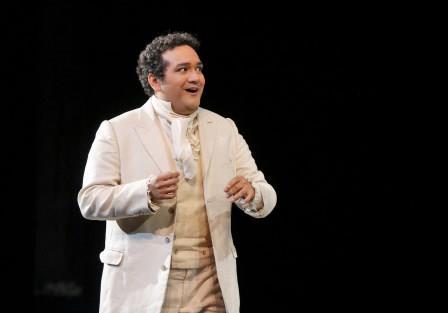 René Barbera as the Count Almaviva in Rossini's
The Barber of Seville (Photo by: Cory Weaver)

This revival was directed by Roy Rallo with a great sense of fluidity that was aided and abetted by the choreography of Nuria Castejón. Whether as a result of Figaro's meddling or Dr. Bartolo's house servants -- Ambrogio (Efraín Solís) and Berta (Catherine Cook) -- who delight in their own domestic flirtations, the evening's supporting cast proved to be every bit as much a tonic as the romantic leads. Kudos to Edward Nelson (Fiorello), Matthew Stump as an officer serving the Count Almaviva, and Andrea Silvestrelli as an all-too-easily compromised Don Basilio. 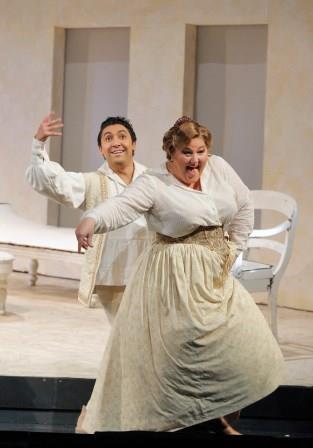 It's so easy to take Rossini's opera for granted after many years of attending the opera. Yet this performance had a crispness and joy to it that filled the auditorium with cheer. I was particularly impressed by Alessandro Corbelli's performance as Bartolo (a veteran buffo doing beautiful work) and by the warmth of Daniela Mack's voice and personality. 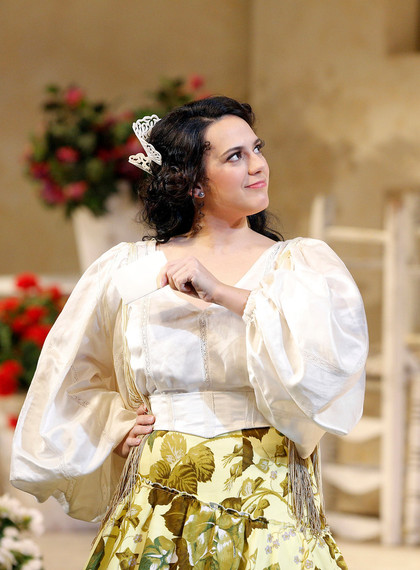 Daniela Mack as the feisty Rosina in a scene from Rossini's
The Barber of Seville (Photo by: Cory Weaver)

While there was no denying tenor René Barbera's skill in negotiating Rossini's coloratura passages, I found it equally delightful to watch Catherine Cook kicking up her heels as Berta. Here's some footage from this delightful production (which I imagine will return to the stage of the War Memorial Opera House at some point within the next five years).