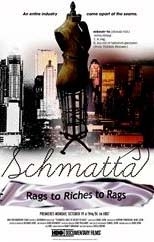 Work in the garment industry once constituted the largest job sector in the city. You couldn't walk down the sidewalk in the Garment District without risking getting run over by a rolling rack of dresses or suits. The garment jobs - union jobs - lifted people up, put a decent wage in their pockets, and created tremendous wealth for New York City. The strong garment worker unions fought to reform a system that was unjust and dangerous. The unions built housing for workers and even formed a bank.
Schmatta: From Rags to Riches to Rags
(debuting on HBO on October 19th at 9:00),
looks at the Garment District as a microcosm of the larger economic crisis impacting the U.S. and the world. It includes interviews with pattern makers, designers, fashion executives - as well as
Joe Raico, a garment cutter and President of Workers United Local 10
, and me.
Schmatta
details the tragic
Triangle Shirtwaist Fire of 1911
and the massive response by working people to form unions and to make their factories safe. The fire, and the horrific working conditions across the industry, created a movement among people who were new to this country, but profoundly familiar with the power Americans have to create change. The film pulls back the curtain on the glamorous and decadent world of fashion and reveals the stories of workers. It talks about the immigrants, initially Jewish and Italian, and later Latin American and Chinese, who beat a path into the middle-class through the Garment District. They fought to make their lives and the lives of their children better. And now so many of our country's leaders in science, law, education, politics and other fields are just one generation out of the garment shops. Garment workers won safer workplaces, better hours, wages, and benefits for themselves, but they also became a critical voice in the national push for reforms like Social Security and later civil rights. Their pride in both their craft and in their role as agents of change -
represented by the Union Label
- extended beyond the district to an activism that helped improve the lives of the poor and the middle-class.
Schmatta
also depicts the factors that led to the off-shoring of nearly all domestic garment manufacturing and significant portions of other manufacturing sectors - the rise of deregulation, the attacks on workers that were emboldened by President Reagan's breaking of the air traffic controllers strike in 1981, and job-killing trade agreements including NAFTA.

While it's true that the loss of so many jobs has been devastating for American workers, there is a great deal of good that can come from a documentary that helps advance a dialogue about many critical issues in our country today.

The trend of manufacturing jobs moving overseas, whether it's clothing or cars, is unacceptable. We cannot become a country that no longer makes any of the products we buy. We must continue to fight against trade deals that hurt the American worker. Join us in taking action here.

The contribution of immigrants to the U.S. is undeniable. It is the story of this country's success. We must continue to work for real immigration reform. (Take action here).

Sweatshop conditions still exist, both domestically and around the globe. Workers suffer everyday in unsafe workplaces that threaten their safety and, indeed, their lives. We must continue the global fight against sweatshops.

Finally, it has been the right to organize that has enabled workers to lift themselves up out of poverty, put food on the table, and send their children to college. We must put real power to organize in the hands of workers by passing the Employee Free Choice Act. (Take Action here).

Anyone who cares about maintaining and growing the middle-class in this country should watch Schmatta on October 19th. The film tells a storied history and raises questions that are central to the future of the American Dream.