This summer we are suffering through one of the worst droughts in the last half century. As of late June, over 55 percent of the country was experiencing moderate to extreme drought. The map below illustrates the drought’s far-reaching impacts. While the most extreme effects are being felt in the middle of the country, even regions that typically have greater rainfall, such as the Great Lakes, Southeast and Northeast, are also parched. Although a drought of this magnitude is not entirely predictable, its consequences are. Farmers across the country are losing crops, fish are dying, businesses are losing revenue, communities are scrambling to compensate for dwindling drinking water sources and neighbors battle over access to scarce water supplies. 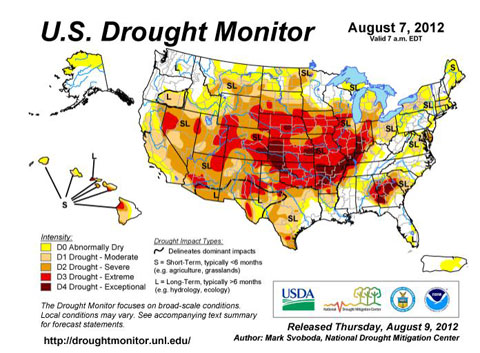 The drought’s consequences are being felt across the country. For example:

While this year’s drought may be the worst in 50 years, indicators suggest that this may be a harbinger of things to come, with more frequent and extreme droughts of this magnitude in the future. While drought in any particular year may not be attributable to global climate change resulting from human activities, it is now abundantly clear that climate change makes drought and other extreme weather events more likely.

The U.S. Global Change Research Program found that droughts -- such as the one we are experiencing now -- are likely to become more common and intense as precipitation patterns change. We can expect longer and warmer dry spells between rain events that will dry out soils and intensify drought conditions. In 2011, the Intergovernmental Panel on Climate Change (IPCC) released a report on managing extreme events and disasters, which predicted that in the U.S. the most noticeable changes we will see are in the number and intensity of extreme drought events.

We all need clean water. The prospect of more frequent and extreme droughts across the U.S. challenges us to find new ways to secure reliable clean water supplies for today and the future. While we cannot make it rain, we can manage the water we have in ways that make our communities and rivers more resilient in the face of extreme and frequent droughts that accompany climate change.

Here are some proven, reliable and cost-effective strategies to enhance resilience of water supplies, including our rivers, streams, and groundwater, in the face of climate change and increased occurrence of drought:

Water in rivers, streams, and underground aquifers is a finite resource. There are limits to how much water we can extract. Droughts bring those limits into sharp focus. Recognizing these limits will compel us to be better water stewards.

By adopting measures like the ones outlined above, communities will become more resilient to the impacts of climate change, better able to withstand droughts, and can ensure the continued health of their citizens and nature.