Vogue Italia doesn’t want to be like other fashion magazines that ignore disturbing news stories. So, it decided to devote its April cover, and 10 glossy pages, to combating domestic violence -- by featuring gorgeous models getting gruesomely attacked by men.

The idea behind the controversial spread is part advocacy, part entertainment. The featured models each recreate scenes from notable horror films (read: Prada meets "The Shining") in images that are equal parts haunting and aesthetically intriguing. 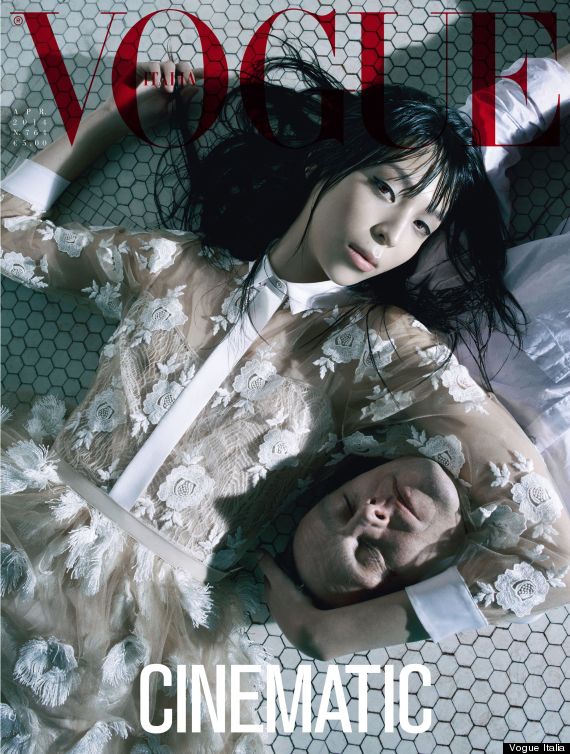 To Franca Sozzani, who has served as the editor-in-chief of the publication for 20 years, the marriage of the two ideas couldn’t have been more fitting.

"The horror of life is bigger than the one that you can see in the movies," Sozzani told the Independent. "This is really a horror show, what we are looking at and what we see every day in every newspaper around the world is how fragile the woman still is today, and how she can be attacked, can be abused, can be killed."

She also noted that last year alone, 1,700 women in Italy were attacked and almost 130 were killed.

While the 64-year-old felt confident with her editorial direction, she was well aware that the others would likely find the series -- which features fake blood, women screaming and men gripping knives -- on the offensive side.

"Saying NO to violence against women enables us to be, in our own way, useful. And to convey, as our civic duty, a message against barbarism," the magazine said in a statement about the series which was photographed by Steven Meisel. "It doesn’t matter if we run the risk of causing a general uproar with the media or arousing criticism; or if we are accused of exploiting pressing issues just to push our way in newsstands. What is important for us is that at least one of the dozens of women suffering violence every day can feel our nearness."

Once the issue hit newsstands, the predicted firestorm erupted.

B/c nothing says "style" like domestic violence.. #Terrible #VogueItalia via @Styleite http://t.co/5lN0NYHig5

Dear @vogue_italia I don't want to be sold domestic abuse and violence against women with my designer clothes. Lost in translation and wrong

The spread, however, did attract some supporters.

One fan noted that, at the very least, the issue initiated a conversation around the topic of violence against women:

But at least the conversation has started #VogueItalia #DomesticViolence

But the magazine has declared that it was doing more than just pushing back against taboos -- it claimed to be inciting meaningful action.

"What is important for us is that ... those who follow us may feel stimulated to take action, condemn and support women in trouble," the magazine stated. "And that they all see that all of us at 'Vogue Italia' are on their side: by utterly and radically condemning all types of violence. This awareness urges us to make some noise."

For those who have taken a stand against the spread, that is the exact problem. The magazine appears to be reinforcing the idea that women are defenseless without offering solutions as to how women and advocates can better fight back against such awful crimes.

"If the horror of life is so much greater than the horror we see in movies, then why reduce it to that?" Jezebel wrote. "And why would you ever want to present the horror of abuse as anything other than completely horrific … If Sozzani and co. really wanted to send a message and stand with survivors, they could have released a statement declaring that the publication will never again feature editorials that glamorize violence. Why bother pretending that you're attacking the status quo when you're just blatantly reinforcing it?"